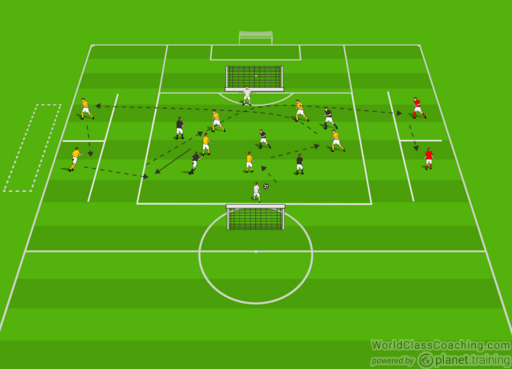 By Sean Reed - Objective This is a session that focus’s switching the play to change the direction of attack in order to maintain possession and create chances on goal. Set Up – Possession Switching the Play The session is set up within one half of the pitch. The area is approx width of the

0 Switching Field of Play and Crossing Part One 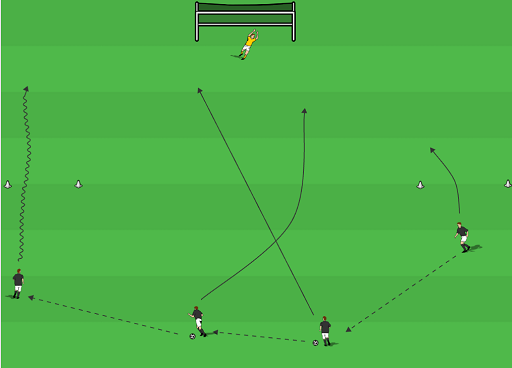 By Gregg Gillies - Set Up: Size (dependent on strength and skill of your players) at least 8-10 players plus GK (in the progression). 6 player set up, as seen in diagram 1 below. Have at least 8, with an extra player behind Player #1 and Player #4. If you have more than 8, you can 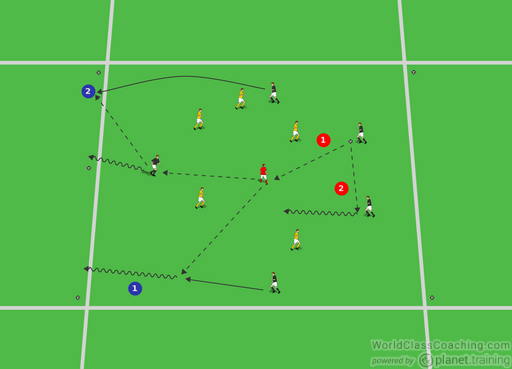 By George Kee Players at all levels struggle with switching the field of play. Often time’s players concentrate themselves on one side of the field and the ball does not get switched until possession is lost. This exercise helps players to develop patience when going forward, helps to develop a certain level of comfort in being 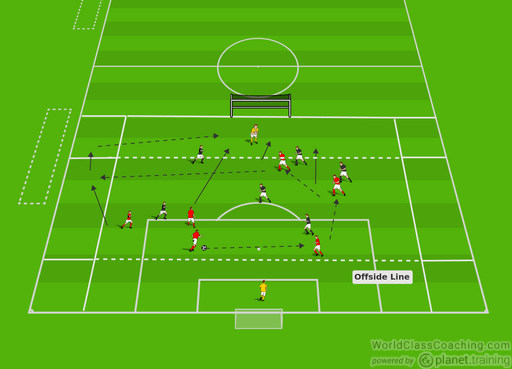 By Sean Reed - Objective This session will develop from the previous session. Set Up – 1st Phase Diagram 1 Set Up Working within 2 penalty areas plus 5yds in length and 5yds wide either side 2x teams with 2x goalkeepers When the team is in possession a player from that team can go into

0 Working the Ball into Wide Areas 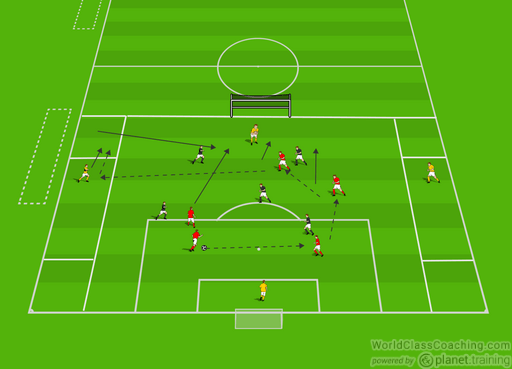 By Sean Reed - Objective This session will focus on creating opportunities to play into wide areas and to finish in front of goal. Set Up – 1st Phase Diagram 1 Set Up Working within 2 penalty areas plus 5yds in length and 5yds wide either side 2x teams with 2x goalkeepers and 2 neutral 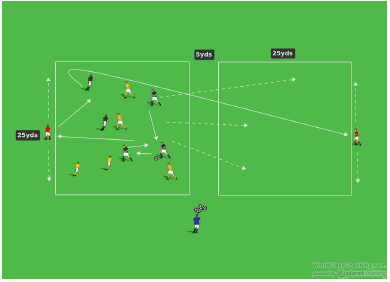 0 Exploiting the 'Weak Side'

By Alex Trukan Defending when compact has many advantages, including restricting space for the opposition, more effective pressure on the ball as well as better support and cover around and away from the ball. It can also lead to creating overloads around the ball and eventually winning possession. On the other hand, however, it also

0 When to Switch Over or Through Players 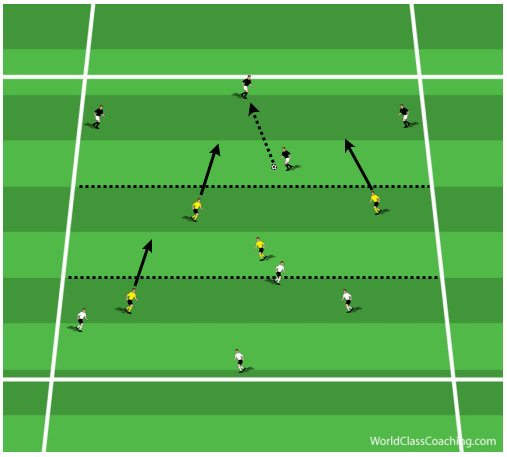 By Sean Pearson Area Size: 25 x 40 yards. Divide area into 3 equal areas Teams: 4 v 4 + 4 Time: 15 Minutes Objectives: To know when and where to play over players or through them Use correct technique for both power and accuracy Improve a close first touch The 3 teams are each in their own

0 Switching the Point of Attack

By Eric Clermont -  When developing a possession based style at the youth level (as I have done over the last few years), I believe that the focus on always needing to play short becomes predominant for many teams. While there are clear pros to this, players are often given only the technical tools to play 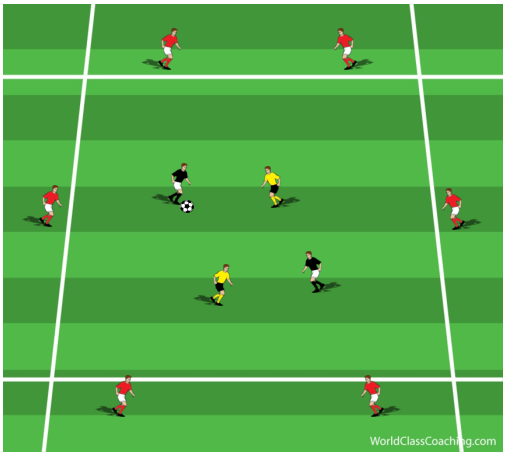 The two central players in possession work with the

0 Game for Changing the Point of Attack 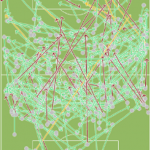 This 10 v 10 game to work on changing the point of attack. 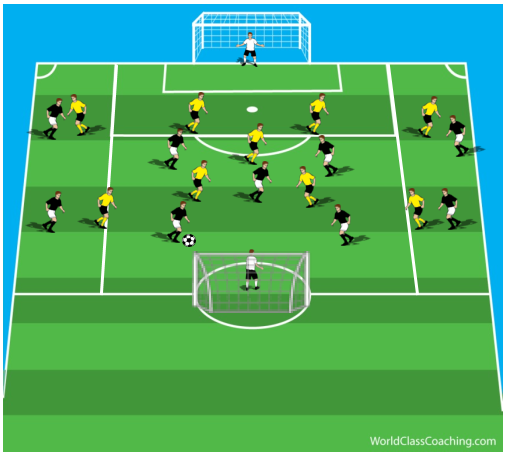 The field will be divided into three areas. The team who is

This session focuses on players recognizing when, where are how to move the ball away from pressure on one side of the field to a point on the other side of the field to attack from. One of my frustrations with players is not seeing the ‘bigger picture’ of the situation in front of them when the space around them is crowded. Players either force the ball further into the ‘scrum’ or if the ball gets passes out or pressure, because of a lack of awareness and incorrect body position the player receiving this ball, plays the next pass back where it has come from. The end result? Usually a loss of possession. So below I talk about when to switch the ball, player movement to help the switch and where to attack from after the switch. The reason I talk about this last point is the point of a switch is to change the point of attack to create a scoring chance, not to just keep possession by going back and forth over and over again.

Use a basic passing warm up to get players moving, receiving, passing and making decision.

0 Spreading the Field With Depth

Welcome to the FineSoccer Drills Newsletter. Today’s featured activity works on spreading the field with depth.

Frequently when we talk about spreading the field, they talk about getting wide to open up space in the middle.

0 Switching the Point of Attack

Welcome to the FineSoccer Drills Newsletter.  Today’s featured activity works on switching the point of attack and getting to goal. Start with a team attacking with a 3-3-2 and a team defending the goal with a keeper and playing a 2-2-1 This is an unrestricted scrimmage except the teams are put into these formations.  If

Start with a 5 v 4 situation in a 35 x 35 area in the corner of half the field. Two other attacking players are on the other half of the field out wide.  There should also be a keeper in goal.

The attacking team must make 5 passes inside the corner grid and once they do, they can pass the ball wide to the

5 Switching the Point of Attack

Welcome to the FineSoccer Drills Newsletter.  Today’s featured activity works on possession, spacing and switching the point of attack.  There are many other activities such as this one in the book Improving Your Team’s Possession Play.

This game can be played with various numbers and on with different size fields.  You would use the numbers you have available and the size of the field would depend both upon the numbers of players as well as what you want to emphasize.

The neutral player is on whichever