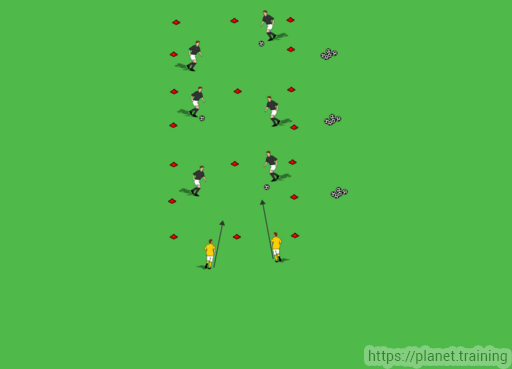 By Anthony Hazelwood The following activity has players working on their soccer specific muscle tension with high intensity defending. Three 6 x 6 yd. zones make up a longitudinal grid and two attacking players are placed in each. At the bottom of the grid, two defenders must progressively enter each zone and must progressively take 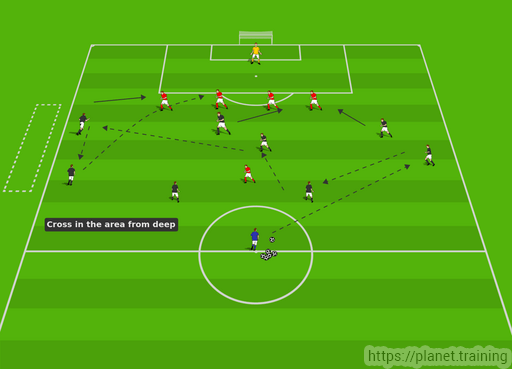 By Sean Reed - Objective For this session we are focusing on attacking play 1v1, 2v2 and 3v2, but due to multiple outcomes other aspects such as defending can also be addressed Set Up – Part 1 • Working in one half of the pitch • Depending on the number of players available you can 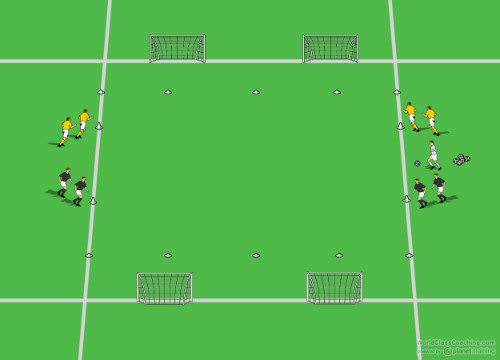 By Alex Trukan This practice is designed to develop Explosive Power which is responsible for sharp sprints to the ball, running duels or 2v2 transition scenarios. This kind of training leads to improved body’s ability to use fuel (ATP) and therefore, produce more powerful and explosive actions. The following practice achieves this in a 2v2 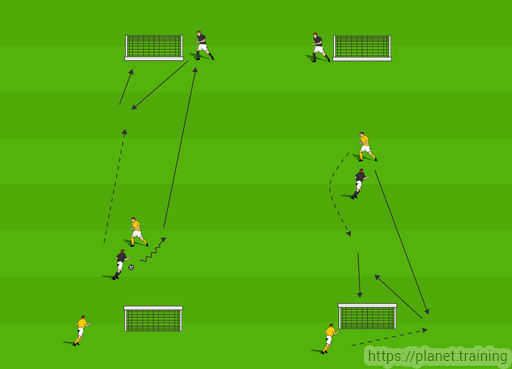 By Sean Reed - Objective This session focuses on looking to play forward and support the play in order to combine to finish on goal. Session 1 Diagram 1 Set Up Working with two groups of 1v1+1 1v1 in the middle 1 player up at each end working either side of the goal 2 small

0 Attack vs Defense with Transition 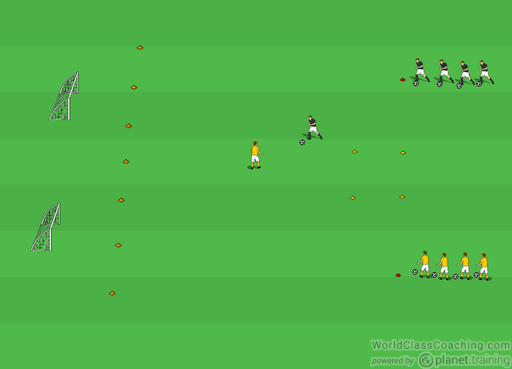 This week's Animated Drill Video is one of my team's favorite 1 v 1 and 2 v 2 games to work on attacking and defensive skills. The quick changes from attack to defense also makes this an excellent environment to train transition. The diagram is being created with the session planner on Planet Training that is available through 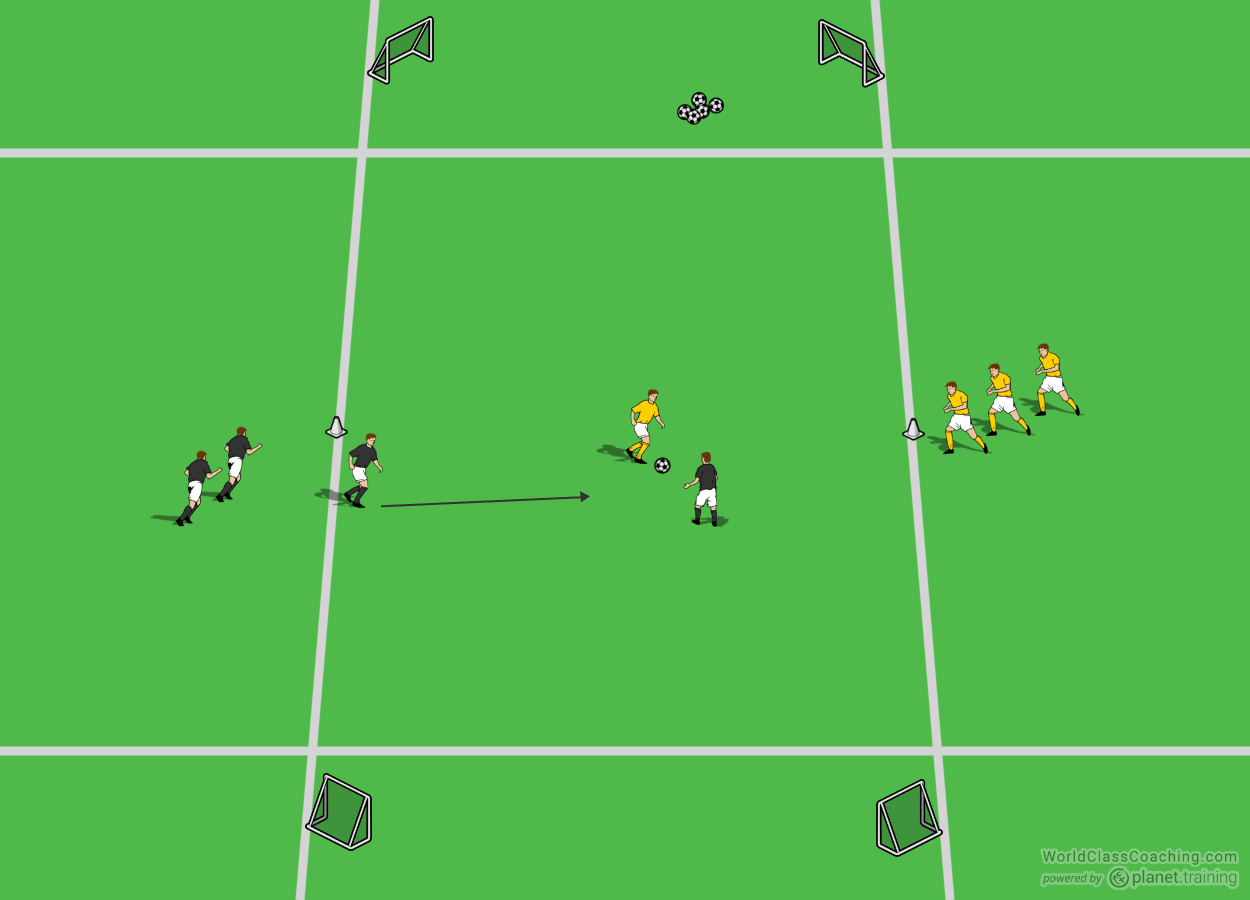 By Alex Trukan This game is focused on developing anaerobic energy system which is responsible for high intensity, short actions during the match. It is especially important in transition phases when every second counts. Both in transition to defence and attack, speed of reaction is crucial. This practice challenges players to make quick decisions upon

0 #039 The Foundation of Effective Defending 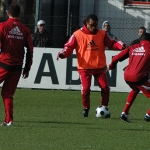 When moving up the pitch to attack the opposition’s goal, losing possessing can lead to a counter-attack. This technical training activity is designed to help players understand the importance of falling back to defend their own goal. A couple of players will need to pass around or dribble past opposition to score a point and when they do, or if things don’t work out; they need to get back quickly and help out on defense. REMEMBER: the BALL is the MOST IMPORTANT THING! 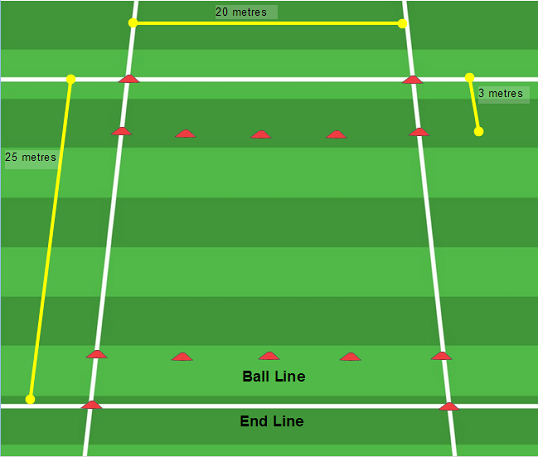 To start this activity, one team starts with possession of the ball, at random. This team’s (the attacking team), players need to

This is a great way to get your players working hard and improve their endurance in a fun environment that gets them competing against each other.

Set up the field as shown below with an area of 12 yards x 10 yards and two mini goals 1 yard wide each. You can set up multiple mini fields depending on how many players you have (figure 1).

Split the group into pairs, with each pair being a team. The aim is to let your team play and have fun. At the same time they will be

Frequently we train by starting with the players in traditional positions and then see how they react. In this activity we have a 2 v 2 going to goal but the 2 attacking players start one in front of the other.

Start with a keeper in goal and 2 defending players. The first attacker starts 35 yards out with a ball and then second attacker is 10 yards further back.

The player with the ball starts with a dribble and then it’s a live attack on goal. The defenders want to concentrate on

Start with a 10 x 10 grid with two teams of players. Each team is assigned two end lines and they have a team of two 10 yards behind each end line

0 Teach Your Goalkeepers To Scan the Whole Field

Start with half a field with a line down the middle.  A keeper starts in goal and there are two teams of 2 in each half.  There is a coach for each half just beyond midfield.

The teams on the right side start by playing 2 v 2 to goal.  The keeper has to focus on that game while

This week’s exercise is designed to help build better aerobic and anaerobic endurance. It involves short sprints, quick changes of direction, recovery defending and also helps to develop a better focus and awareness. The exercise is played at a very high tempo with the players rotating each time the ball goes dead (goal, turnover in possession, ball out of bounds).

For this exercise you will need 4 goals, a set of soccer balls and a minimum of 8 players divided into 2 teams. Mark out a 20x20 meter area. Set up is shown below (Fig 1).

Ensure each team has a good supply of soccer balls; this will help to keep

Each month we add a new magazine update to the Member Drills Database. The magazine contains training sessions, videos and articles presented by top teams and coaches from around the world.

Here's part of a training session presented by Chelsea FC Academy coach Chris Woodword. The session focuses on 1 v 1, 2 v 1 and 2 v 2 situations that lead to a zonal game.

I was speaking to a coach earlier in the season and he said his team was playing really well but was having problems finishing. I thought to myself: “that’s a problem for so many teams”. Over the past few weeks I have been to, and analyzed, several games, and finishing really does seem to be a problem for so many teams. I have seen some spectacular displays of dribbling and combination play, but the players just can’t seem to get the ball into the back of the net.

In today’s exercise we will address the above problem with a simple 2 v 2 v 2 small-sided game that focuses on finishing. As with any other technique or skill, I believe the key to improving your player’s ability to finish is repetition. The format and structure of the exercise also allows your players to develop their anaerobic capacity. This is an excellent activity to use during the competitive season when match-preparation takes a high priority.

Divide your players into two groups of 6 players and then further divide each group into three teams of two. Make certain to give each team of two a different colour shirt. Set up a grid 40 yards long and 25 yards wide with a regular-sized goal (or large net) at both ends of the grid. There should be a goalkeeper in each net. One group of 6 plays at a time. The coach should stand on one of the sidelines with a large supply of balls (Figure 1).

Play is initiated with the coach playing a ball into any of the six players. It is each team for themselves. Players can score on either