Objective
For this session we are focusing on attacking play 1v1, 2v2 and 3v2, but due to multiple outcomes other aspects such as defending can also be addressed

Set Up – Part 1
• Working in one half of the pitch
• Depending on the number of players available you can introduce another pitch or have players resting and rotating
• The area is 3-5yds inside the width of the area and split in two. See diagram 1
• 1x GK, 2x Defenders, 2x Attackers and 2x Servers
• The game starts as a 1v1. The restricted area starts outside the 18yd box, but once in the area is free play
• The coach plays into one of the servers who then plays a pass to the 2nd server and then plays into one of the attacking players. This then becomes a 1v1 attacking situation
• Once that has finished, they then play to the other side

• Players can rotate positions so everyone gets a chance to serve, attack and defend

Set – Up – Part 2
• This part of the session progresses to a 2v2. See diagram 2
• The middle cones are removed to join both areas together
• The same build up as with the 1v1 starting with the servers
• An offside line is introduced to encourage players to time their runs and for the defenders to manage their line

Progressions
For part 2 & part 3 is to include a time restriction to encourage quick play. 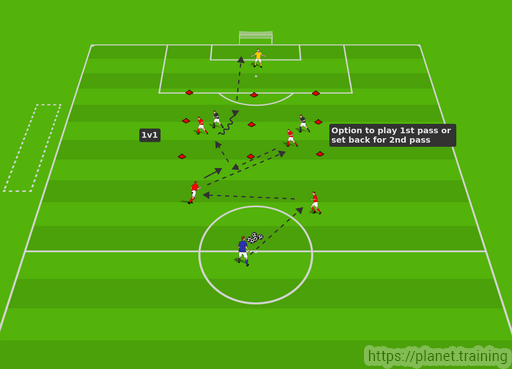 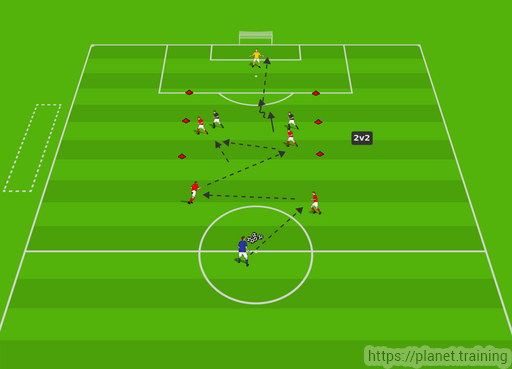 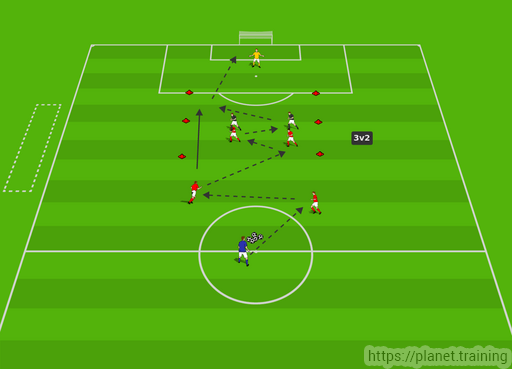 Some Coaching Points
• Initial movement to create space to get on the half turn
• Positive facing up the defender
• Manage your own space and the space in behind the defending player
• Timing forward runs
• Creating space for each other
• Creating 1v1 or 2v1 opportunities
• Playing on angels
• Playing safe side
• Tempo of play, changing up to catch out defending players
• End product on goal

By Sean Reed
Former First Team Coach of Championship team Fulham FC. Sean is a UEFA A Coach with a Masters in Sport Coaching. He has over 15 years of experience working in professional football from Academy through to First team in the Premiership and Championship.