This session is designed to be a progression from possession, to penetration and finally including crossing skills at the end. The session will require concentration on the part of players as there is clear functional tactical elements to the session. The pace must be kept high moving from activity to activity in order to keep the session focused.

Activity 1: Warm up Build Up 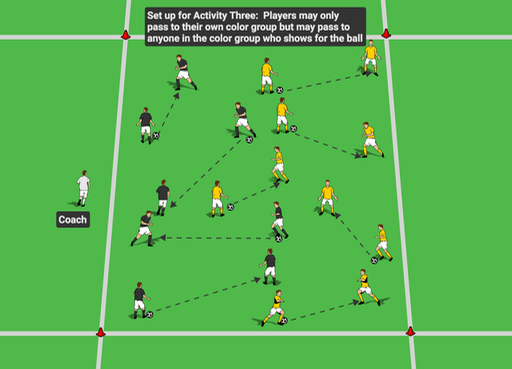 Setup:
Warming up our players often happens separate from the actual skills of soccer and is viewed by many coaches as unrelated to the theme of training in the main series.

This activity emphasizes a gradual warm up using the skills that will be needed during the main series when working on passing and receiving and possession skills. The activities described should be intermittent with range of motion and active stretching when transitioning from one step to another in the described activities. All stretching should last at least one minute per stretch with any static stretching. Coaches must lead the stretch so that the duration of the stretch is not cut short. Each of the activities described can last around 3-4 minutes for a long gradual warm-up leading toward a main series workout.

All players should have vests at the start of this activity and split into two different color groups. For this activity, they will be described as wearing yellow or black.

Execution:
Activity 1: Players are grouped into twos while passing and receiving with their designated partner in the grid space provided (for groups of 18 or more the grid should be quite large to encourage lots of movement covering all portions of the grid). Give instruction to keep the head up and avoid touching any other players.

Activity 2: Play continues with one ball per two people but instead of a designated partner, the players with the ball must find any person in the grid and pass to the person who actively calls for the ball. Players must not pass the ball to anyone who does not actively show for the ball by communicating their desire for the ball through their voice, their posture or clear eye contact. Coach must emphasize those three methods of communication.

Activity 5: Coach reduces the number of balls to three for passing and receiving. As the number of players builds up the defending players with vests on no longer attempt to knock the ball out of play but instead try to keep possession inside the grid. The other players attempt to win the ball back for their passing and receiving with non-vest wearing players. It basically becomes a game of keep away.

Activity 6: Coach controls the numbers leading to even sided play with both teams attempting to maintain possession. The coach closely monitors play and challenges each team to attempt to possess all three balls at the same time. When one team possesses all three of the balls then play is stopped and the losing team makes a sprint to the end line and back. Then play is resumed with the same challenge until the coach calls conclusion of the warm-up. 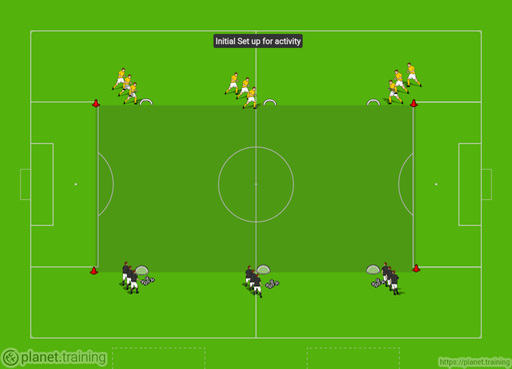 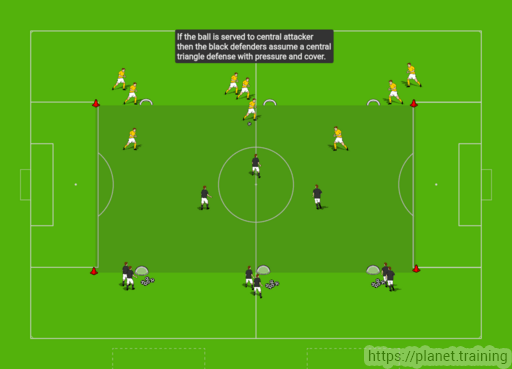 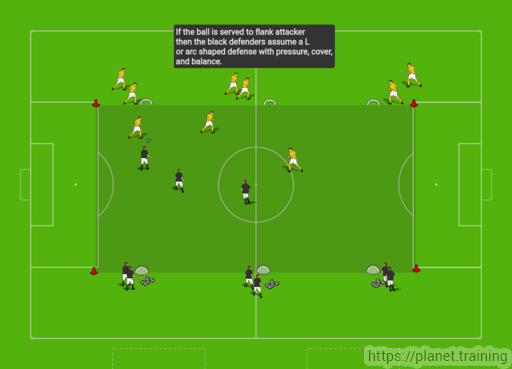 Execution:
One team serves from the end line and immediately moves out to defend. The other group of three move the ball and attempt to score on any of the three goals at the opposite end line. If a turnover occurs, the serving team attempts to score on their three goals. When the ball goes out of play, reset and start over with a new group. If the ball is served to the central attacker, then the defending group must make a triangle with pressure and cover. If served to the flank attackers, the defenders should defend in an L or arc shape as shown in the diagram.

Variations:
Ball always served from one end and then switch after ten balls.

Can become a transition game when the ball goes over the end line, the attacking team begins to defend the new group coming onto the field from the end line. 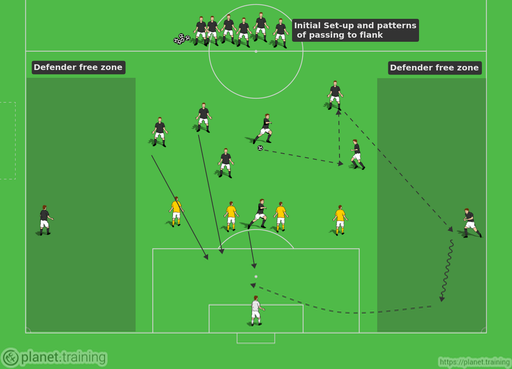 Setup:
Two free zones are set up outside a 36 by 30 yard field. Zones are free from defenders. Grid size can be up to half field depending on age of players and functional desire of coach. The free zone sizes can also be adjusted. 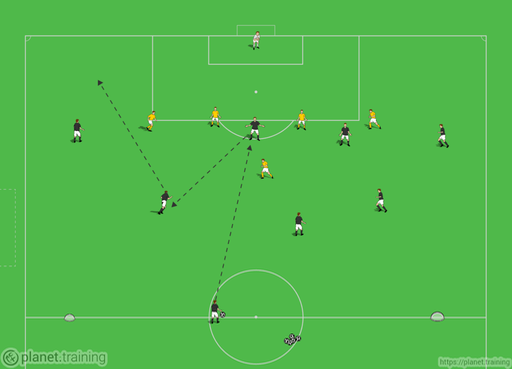 Setup:
A half field is used with players setting up in defensive shape with a group of five players as shown in the diagram. Eight attackers in the coach's preferred shape settle into the field.

Execution:
Play is started by the coach or other server starting the ball play to the attacking group. Depending on the emphasis of attack or defense, the ball will be started in various portions of the group of attackers. For attacking principles, all play will begin at the midfield stripe and the ball can be forced to certain players and play continues from there. For defensive principles and practice, the ball can be started by the keeper and only rolled out to various defensive players to keep possession and work the ball back to the midfield stripe under control. Counter attack goals can be set at the midfield stripe on the flanks.