Just as one vs. one attacking is an essential part of the success of a team, so goes the importance of defending in the same setting. The skills required for this includes technical ability to defend as well as tactical decision making. The role of the first defender is to delay the attack and buy time for the rest of the team to shape the defense well. This session is designed to train at the individual level in order to become a good defender.

Emphasis will be made on delaying by getting pressure on the first attacker. Additionally, the technical skills of arcing the run, lowering the body and presenting side on is key. Jockeying the attacker and making their play predictable is also important as we teach our players these defending skills. 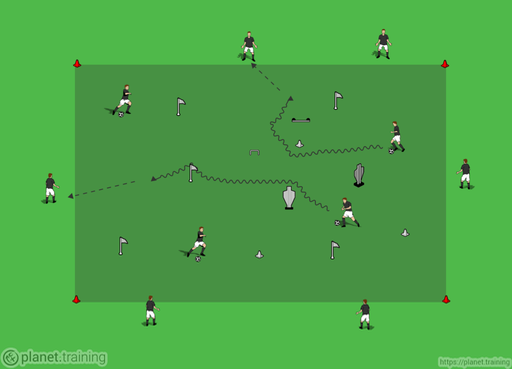 Execution:
Players move through the grid with dribbling while using Coerver moves and hand off the ball to player waiting outside of the grid. That player then enters the grid and does the same. Players must avoid all obstacles as they move through the grid to the other sides of the grid. Coach blows whistle every two minutes and alternating stretches and range of motion activities ensue for one minute. Restart.

Variations:
Start with the ball in hands and play handball.
Move to foot skills with alternating stretches.

Activity 2: One vs. One Defending in Grids

Execution:
Players serve to each other alternately from one end of the grid to the other. Players defending try to stop the attacker from settling the ball on the end line. Play for one minute and one player rotates at the end of the minute and finds a new grid or rotates one grid down. Keep track of all goals for whole activity or reset after each minute. Reward winners of the defensive battles not the attackers. 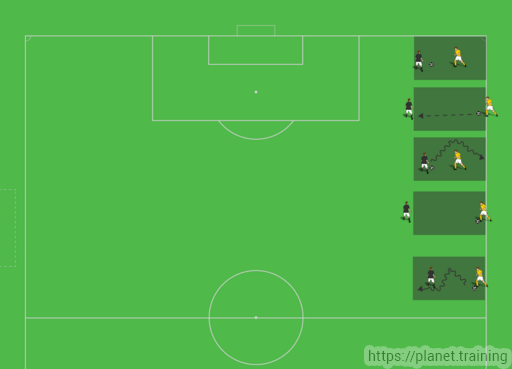 Variations:
Set a ball on a cone on each end for the defenders to defend and the attackers to attempt to hit off the cone.

Put a flag on each end and strike any part of flag to score.

Activity 3: One vs. One Defending to Goal

Setup:
Two full size goals are set up at opposite ends of a 20-30 yard grid. Goal keepers in each goal.

Execution:
The group is divided into two teams. Each team is lined up by the goal it is defending. The ball starts by being served to the opposite end. The server goes out to defend with an arcing run and close down the space with speed and then jockeying. Play goes one vs. one with coaching emphasis on individual defending not on the attack. Play continues until a goal is scored or a shot is played out of bounds or it goes out the sideline. If any of these occur then a new server starts the play. Play will be quick and competitive if done correctly. Play with more than one field if the team is large. 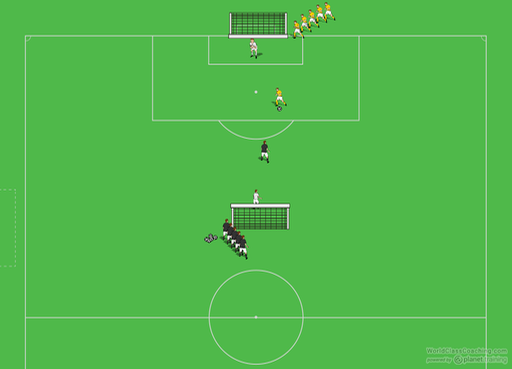 Variations:
No continuing of play even if you score. New attacker and defender each time.
Play without sidelines so that only the balls over the end line will end the play.

Activity 4: Two vs. Two Defending to Goal (With progression to 4 vs. 4)

Setup:
A grid is set up using full size goals on each end with keepers. A grid size of 20 X 25 or larger is most beneficial but the coach may select different sizes as numbers are added to move up to 4 vs. 4 in this context. 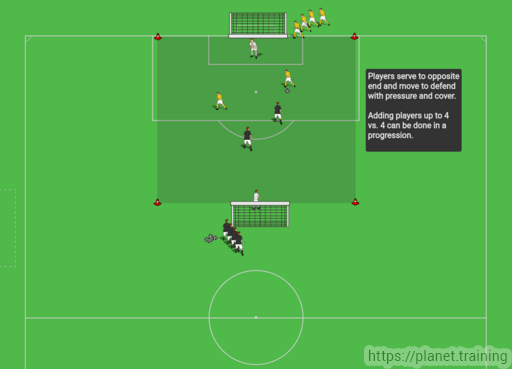 Execution:
The defender serves from one end and moves outward with speed to defend with an arcing run. The second defender moves out to a cover position behind and to an angle from the first defender. Coaches give cues and paint pictures to identify situations where switching to first defender is necessary.

If a player shoots and scores then they are finished and new groups come on with a new service.