This training session emphasizes small group play and defending the vital zone with crossed balls. Finishing activities designed to give repetition will also be a focus.

Setup:
Three to four sets of the triangles are set up as shown in the first diagram. Three players are in each triangle and set up on the cone in each location. Distance between cones should be about five yards within the triangle and 15 yards between triangle sets. 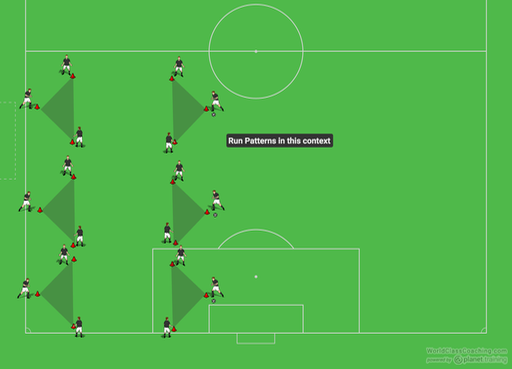 Execution:
Players execute a series of predetermined passing sequences as shown in each diagram. Players should eventually become so adept at this warm up that it can be led by the players with the switching of the patterns being done by the leaders of your group. Spend approximately three minutes on each passing sequence before switching sides.

Variations:
1. Coach can set up competitions between the groups to see how many passes in a pattern can be accomplished in a set amount of time.
2. Coach can change up the size of the triangles in increasingly bigger distances and switch groups to each of the increasingly bigger spaces. The precision of passing touches can be translated to the larger spaces that may occur in the game.

Coach this instead of just letting it happen. Demand their best communication and touch. No neutral training. 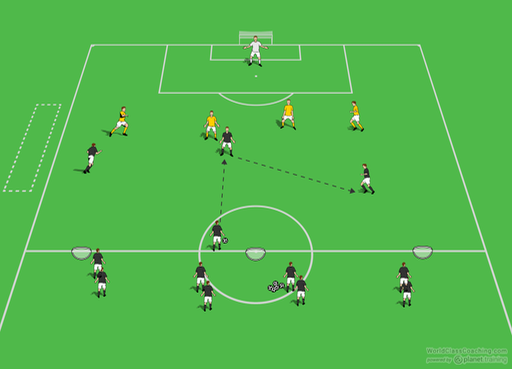 Setup: 30 by 35 yard grids with two end zones with target players in each zone as shown.

Setup:
Two free zones are set up outside a 36 by 30 yard field. Zones are free from defenders. Grid size can be up to half field depending on age of players and functional desire of coach. The free zone sizes can also be adjusted. 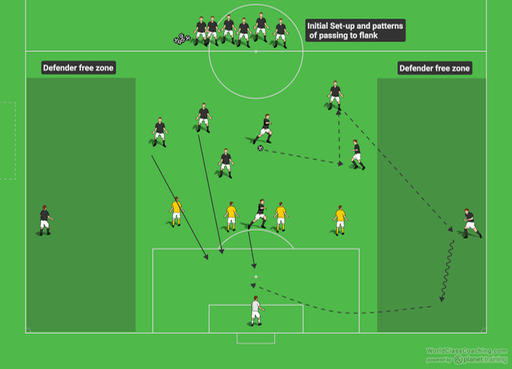 Variations:
Coach can limit the attacking group to four players plus the flank free zone players.

Coach can require all attack to come from flank with all attackers selling out to the crossed ball without any balance.

Coach can blow whistle and the ball must get to the flank within two touches.

Coach can allow counter attack opportunity for the defending group on opposite full size goal.

Coach can limit the number of attackers that can come into the box for the crossed ball. 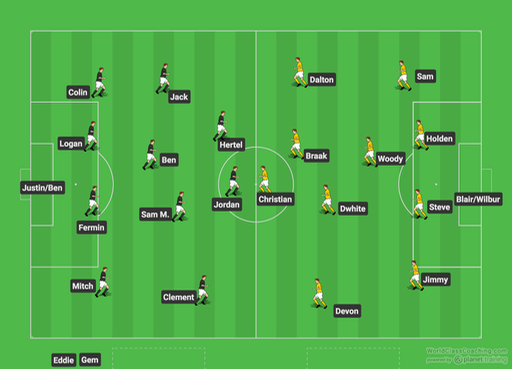 Execution:
Full field. Coaches randomly end play with whistle and start a new ball where the coach desires to work on functional play.

#126 How to Remove Diving from Soccer