1v1+4 to develop Power to Recover

This practice is focused on developing speed at which the body recovers between high intensity actions. The quicker ATP (energy stores) is refuelled, the quicker the body will be ready for another maximal burst and breath will be kept under control. From technical point of view, the practice develops various ways to beat a player in 1v1 situation – through a dribble, forward pass and combination play with supporting players. This practice has competitive element to it making sure players are engaged and on task.

Set up and directions
Organise 12 x 18 yards rectangle with two small goals on each end and two end zones (3 yards into the area). Two players start in the middle of the area, one of them is attacker and another one, defender. Four players start on the outside, two between goals and two on the sides. These players should have at least 3 balls each for supply to ensure flow of the practice. 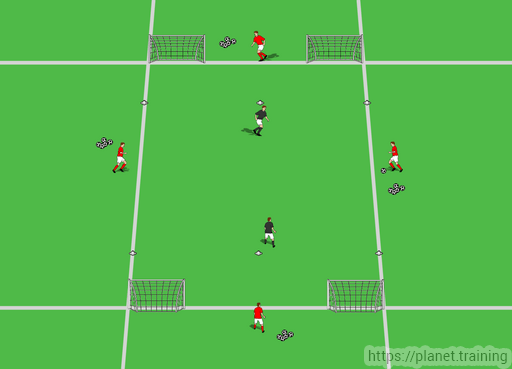 The practice starts from one of the neutral players on the sides who play the ball into the attacking player. The role of the attacking player is to get into the opposition’s end zone and score. One way of doing it is dribbling individually and finishing. If the defender gets the ball, he becomes the attacker with the same task. 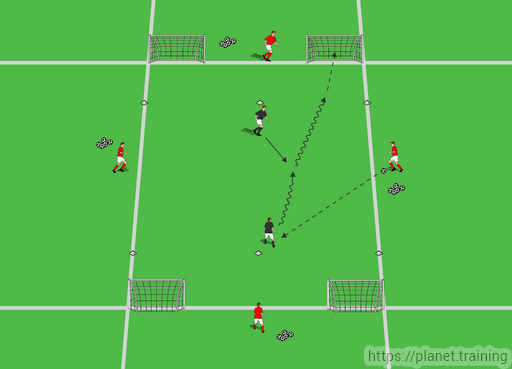 Another option is to combine with outside players and get in behind using one-two. Players on the sides can only play off one touch to increase the tempo and encourage forward play. 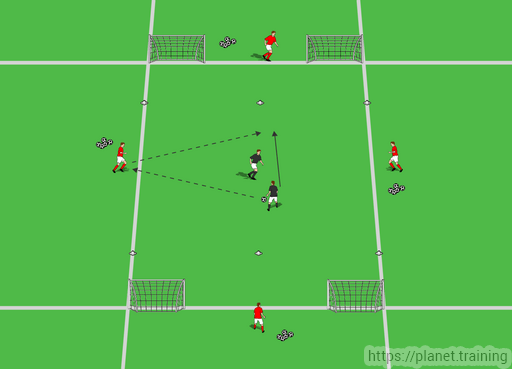 Finally, a direct pass into the player between goals (target player) can be used. This should be followed by a forward run to support and finish into one of the goals. Similarly, to the outside players, target players can only play off one touch. As soon as the goal is scored, next ball is played into the player that scored it. 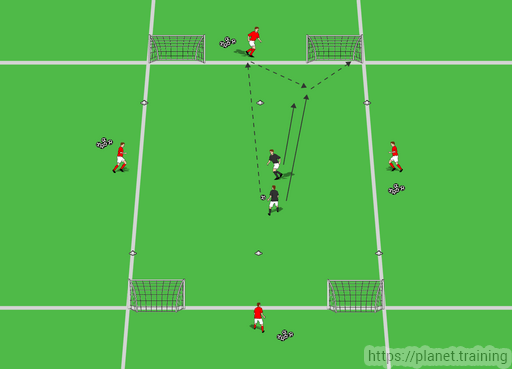 Timing:
The practice (for each pair) should be continued 1-2 minutes and be repeated 6-10 times in 2 series. Rest period between repetitions should be 3 minutes (other players working, switching in twos) and between series, 4 minutes.

Variations:
– Have to combine before scoring/not allowed to combine
– Increase/decrease the area size (changes max. 2-3 yards to make sure the conditioning effect is achieved)
– Outside players can have max. two touches but not allowed to play backwards