This is a great session to run when your team is ready to play, but needs to clean up and clarify basic midfield and back line roles and supporting runs.

Give and Go Box 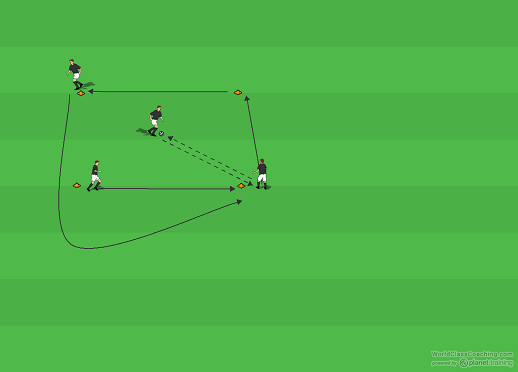 Coaching Points
The coach should set this activity up multiple times to accommodate all the players on the team, then work between the stations making sure the players are focusing on crisp, over hit passes and good timing of runs.

Set Up
4 players work on a W made of cones, approximately 10 yds apart, with one extra centrally dropped cone at the base of the W ( as shown). The player at the base of the W shifts between the two base cones when working with a player on the central cone. When working with the players on the wide cones, they give and receive back the pass. The player on the central cone at the top of the W always goes to the dropped cone at the bottom of the W after making the return pass to the shifting player. 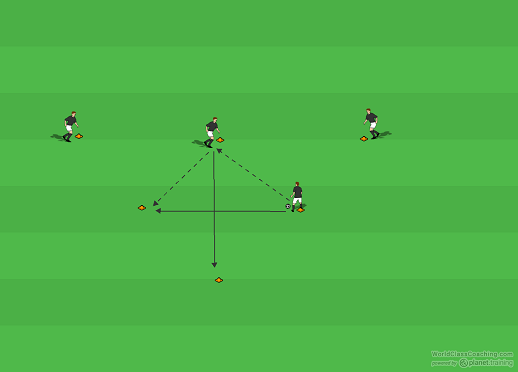 The idea is to always look for the open space to run, and the open space created by those runs. As the next diagram shows, the shifting player now does a give and go with a wide player, before turning back to connect at the center with the remaining player who should be coming central. The player on the drop cone then takes that wide position, while the wide player who just passed goes down to the drop cone. 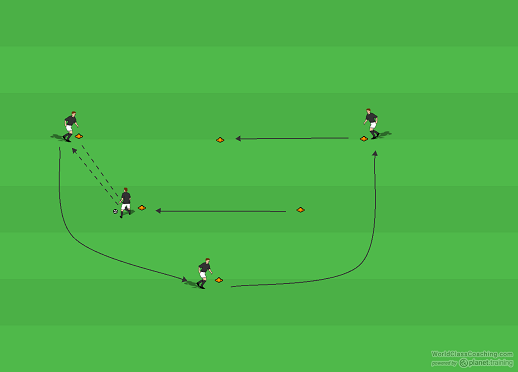 Finally, the remaining player who went central completes the passes with the shifting player, goes down to the drop cone, as the player at the drop cone is moving up to the other wide position to complete the final give and go. At this point the coach can decide whether to keep the drill continuous and fluid or reset and switch out players starting positions with in the W. 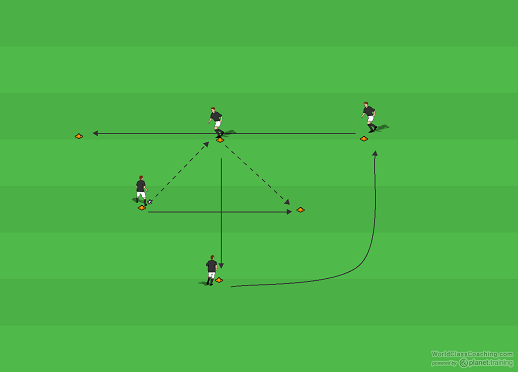 Coaching Points
Good passing, touch, movement and communication, it’s all here. The coach should encourage the players to work on doing this at game speed, with as few touches as possible. This drill requires energy and the coach can bring that by praising the groups who are “ hitting on all cylinders”. A group of players moving and passing like this on the field can really off balance an opponent and create scoring opportunities.

Get the Overlap Forward

Set Up
Set two cones diagonally , 15-20 yds apart on one side of the field near the half line as shown. Place a 5yd x 5yd cone box out on the line at the top of the attacking third. Two players combine to simulate an overlapping pass and run. The idea is to commit to both without hesitation. To make this work,( or not get your team counter attacked if it doesn’t), the ball MUST go AT LEAST to the box and any miss MUST be out of bounds or further up the field. Players rotate in groups of two. 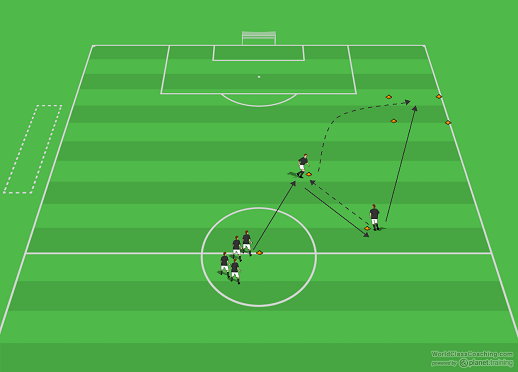 Coaching Points
The coach should focus the team on hitting this quick, at speed. Don’t hesitate on the service and DO NOT leave the ball behind the overlapping runner. This is about playing to open space, not hitting a player in stride. (Even though that is a beautiful thing)

Progression – Go to Goal
Once the groups are in a rhythm, have the overlapping runner send in a cross to the original passing player who bends a run to goal after making the wide pass. The keeper should stay in the goalie box and all shots should come outside the 6. 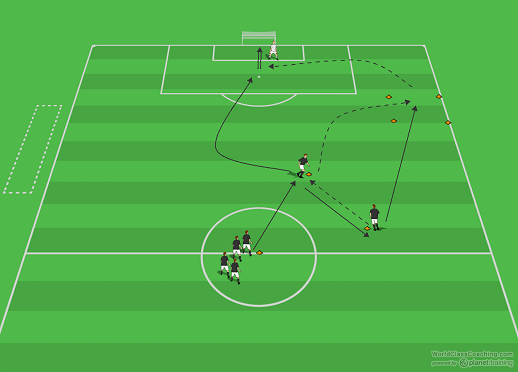 Coaching Points
Make sure the players are sprinting hard here and trying to get good, but aggressive touches and shot off in the box.

#126 How to Remove Diving from Soccer