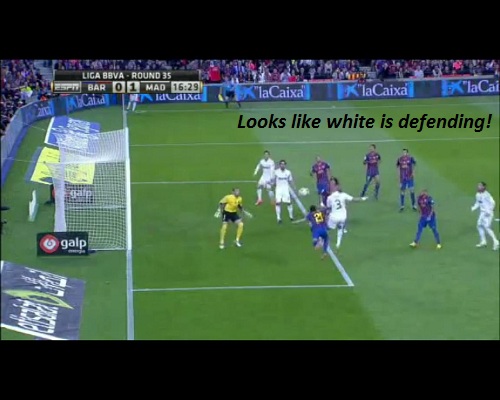 This first image shows, in addition to the fact that this goal should very well have been called off for offside, a lack of interest from the Barcelona players. Four of the five players are off position and do not seem to be marking any of the Real players and all four are caught ball watching! Shocking at this level in a game on which a lot was riding. If you did not know that this play lead to Real Madrid’s first goal, you would probably guess that it was a Barcelona cross being defended by Madrid and not the opposite. Not much could be analyzed when four players are caught out of position and caught ball watching at the same time.

No-one in the “Zone” 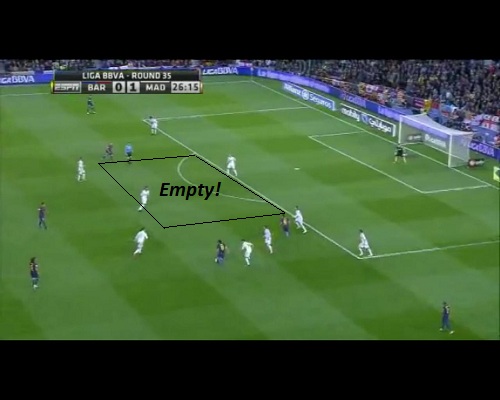 Here, Barcelona are without a single player in the zone right around the arc (what is usually called zone 14) which is famous for being the staging area of many goals scored in soccer specially by Barcelona themselves! Real Madrid have two players close to the ball, three in a triangle in the middle along with two center backs. All those Real Madrid players are faced by only three Barca players, not a high probability situation. It is most dangerous, specially for youth coaches, to set teams up to create high probability scoring chances and the setup in the this image certainly does not help. If a magical Messi through ball results from a play like this once or twice, it will most probably come to nothing in the majority of the other incidents. Getting teams drilled to increase their chances of success will certainly help in situations where the team is not playing at its best as the case was with Barcelona this past game. 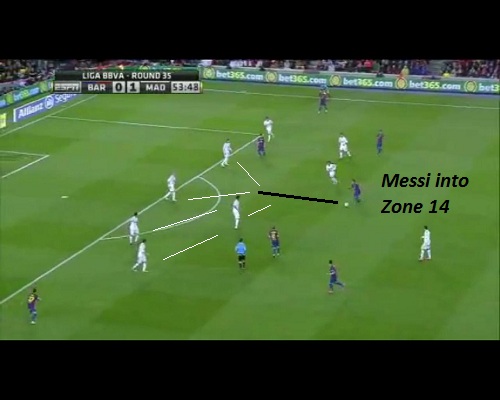 Barcelona in many cases had no players in zone 14 or did not manage to get the ball there often enough and here is an exception cases that lead to their only goal of the game. Messi made things happen by dribbling into that danger zone causing the Real Madrid defense to panic and attempt to swarm Messi. Analysis of numerous games at previous World Cup competitions at all age groups showed a very high percentage of goals scored either directly from or through buildup through “Zone 14” and here it worked for Messi. 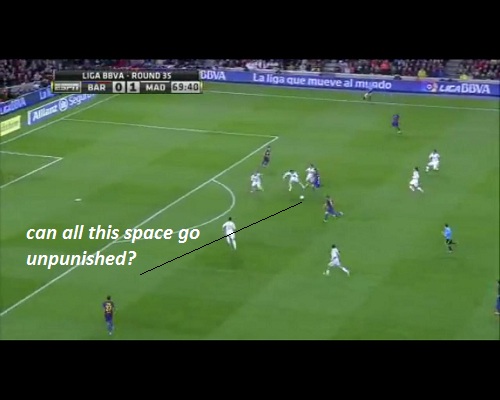 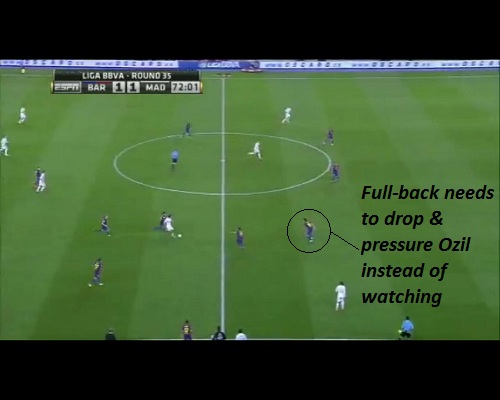 Barcelona dominated possession in this game and only allowed Real Madrid two decent chances on goal all game, but the mistakes leading to both those chances were lethal. Here Barcelona’s left back (Adriano) is caught making an unbelievably silly basic defensive mistake. As you can see in the image, he is caught ball watching and completely forgot about his number one defensive task in this case which is closing down Ozil on his side or matching him if he makes a run (picking first runner). The left back failed to do either job and Ozil made him pay dearly for with a magnificent pass behind the defense to Ronaldo that Adriano could only watch in awe (sounds familiar?)

I often heard the saying “soccer is a simple game” and it cannot be truer even at the highest level. Simple mistakes or a brief lapse of concentration could cause a team a match even if they dominate possession. Young soccer players need to be drilled and disciplined into doing the right thing at a young age so that the basics become second nature to them as they mature as players. That is true for both technical and tactical skills.

Players at all levels need to watch games like this Classico and realize that simple mistakes do occur even at the highest level. Some mistakes are avoidable and hence each player needs to constantly remind himself or herself to concentrate at all times during a game and that as the competition gets better and better each little mistake could have devastating results.

Despite not having much of the ball or the chances in this game, Real Madrid managed to steal the win. A clear factor was their defensive discipline, but another crucial element was their general discipline. The Real players did not commit a large number of overly aggressive fouls as has been the case in past Classicos. Keeping their cool allowed them to remain focused on their defensive duties and also allowed them to launch a brilliant counter attack that won them the game and probably the La Liga title for the first time since 2008.