This La Liga match featured a clash of wits between Barca and Atletico Madrid. Barcelona hosted a Madrid side level with them at the top of the table (48 points each). Rushed from the outset, the Catalans needed twenty minutes to pull level. Lucky enough to reverse the score before halftime, they then benefited from the ejections of Filipe Luis and Godin to help them maintain this lead.

No surprises in the Barca starting eleven for this match with all incumbents accounted for. For Atletico, Diego Simeone surprised a little when he assigned Ferreira and Carrasco in the middle alongside Griezmann. However, other than that, the Argentine went with the classic line-up.

The Colchoneros have been known for their fast starts. Simeone chose players that would start off with a high-level of pressure on Barca. Ferreira, Carrasco and Griezmann shared the work of dealing with Mascherano, Pique and Busquets. 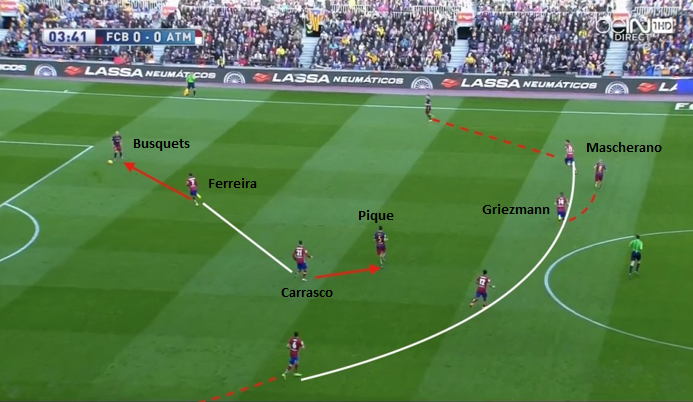 Griezmann is on Mascherano while Ferreira and Carrasco follow the movement of Busquets and Pique, respectively.

The second defensive level pressures the Barca strikers when they get within 20 meters. When they come out, it’s usually Augusto Gabi who occupies the zone. As a last resort, they stall-out Messi or Neymar when they try to make themselves available to the flanks. 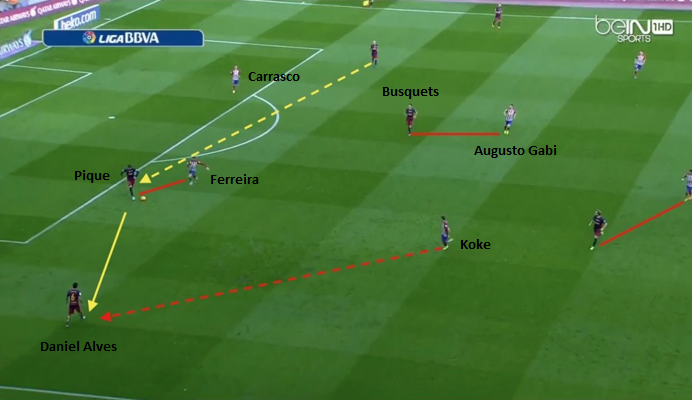 Ferreira and Carrasco apply pressure on Pique. Koke is preparing to support the effort by sliding out to pressure Daniel Alves. In the middle Augusto Gabi follows Busquets. 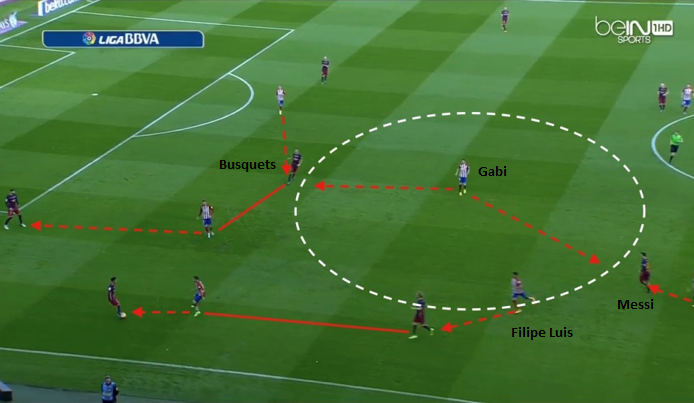 As Atletico closes its organization, Gabi occupies the space in the middle and is in a position to either help Filipe Luis with Messi or increase pressure on Busquets.

For proof of how effective Madrid's pressing was, Barca wasn’t able to get into the opposition’s half until the 5th minute of play. Simeone’s players are very comfortable in small spaces, especially on the flanks and in the last 30 meters.

Often these sequences turn-out wrong and this lasts until the end of the match. Luis Enrique's players struggle to get on the ball. 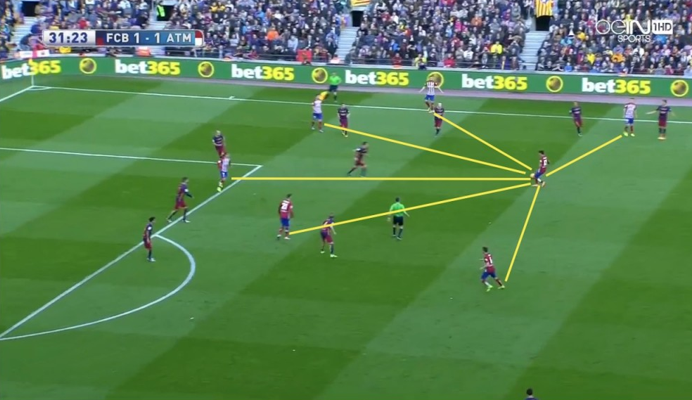 Throw-ins are real opportunities for attack by Atletico, who rely on shape, technique and mobility to work the gaps left open by Barca.

The opening goal, however, woke-up the Spanish and European champions. With Atletico still pressing, Neymar was the first to raise his level of play.

When pressed back, Atletico will fold inside their own last 40 meters: attackers and midfielders compact centrally and work to push the ball wide. If Barca somehow gets inside the block, defenders are present to step-up as well as being assisted by recovering players. Facing such a defensive stronghold, Barça has to show real technical prowess to approach the goal. 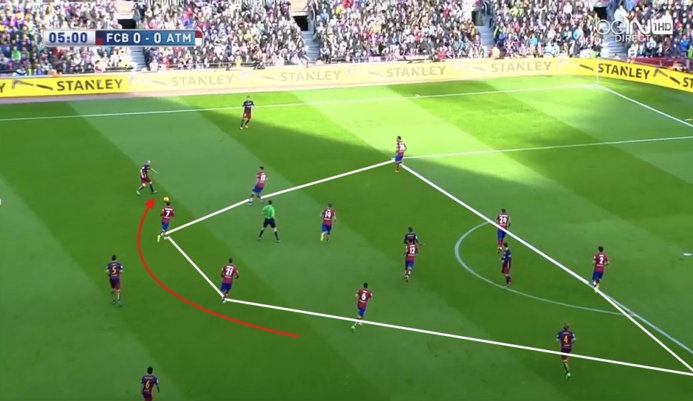 Atletico’s block operates to direct the ball carrier and the ball out wide. 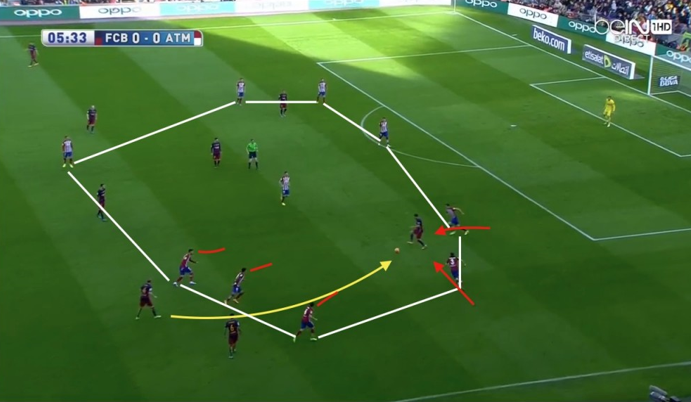 When the above happens, Atletico tightens the marking and drops two or three midfielders back on the target striker. 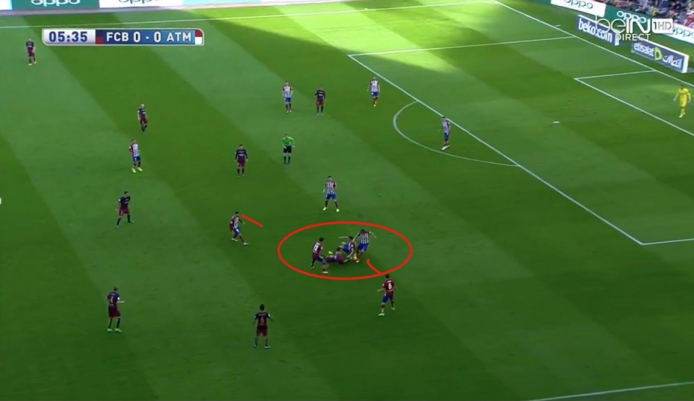 In the above sequence, Suarez finds himself between Godin, Filipe Luis and Augusto Fernandez. 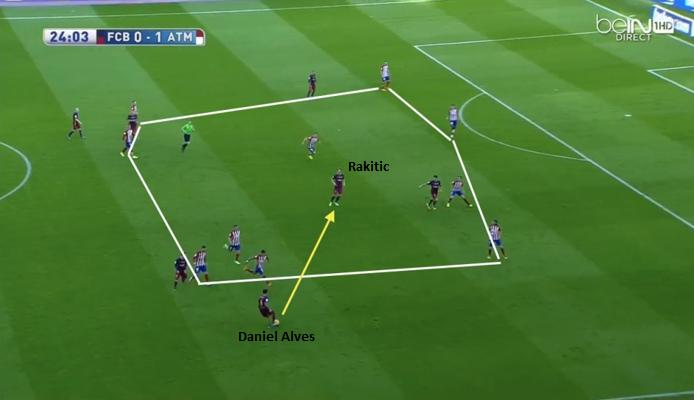 This time Daniel Alves wants to find Rakitic inside the block. 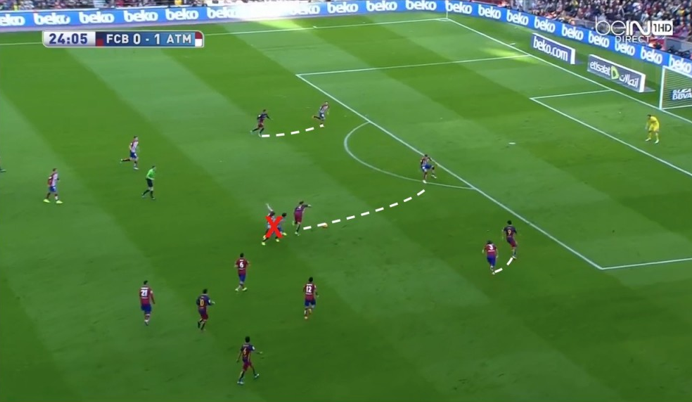 Rakitic is forced to break two players down individually in order to advance.

With very little field to work with when he is positioned between the lines, Messi tries to change things up by making himself available outside of the opposing block. He is able to find a bit of space and exploits Madrid. Jordi Alba and Daniel Alves contribute to the cause with diagonal passes over the defense.