After a difficult, yet victorious start to their Champions League campaign, Zinedine Zidane experienced his first Madrid derby as the coach of Real. His team lost to an Atletico Madrid that is simply satisfied to be collectively higher.

In addition to Bale and Pepe, whom have been absent from several matches, Zidane was also without Marcelo and his services for this match. On the right side, Danilo takes the vacancy left by his compatriot on the left of the defence. Opposite Zidane, Diego Simeone made three changes from the team that went to a nil-nil draw at PSV Eindhoven in their previous Champions League outing: Gimenez, Augusto Fernández and Torres replace Savic, Oliver Torres and Vietto, respectively.

There weren’t any surprises early in this match: Real Madrid would take possession in their own half and face Atletico who was in a 4-4-2. The target structure for the Colchoneros were Kroos and Modric, who found themselves surrounded by a cage formed by the midfield and the Griezmann-Torres duo in front of them. This system deprives the Madrid defence of two of their shorter outlets centrally, forcing them into lateral ball movement which is not conducive to build-up.

During the first minutes of play, Real looked to go direct to Benzema and Ronaldo. The speed at which they played direct took the heart out of the game and any loss of possession was quickly gobbled up by the opponent. They were also looking to take advantage of the slightest opportunity to go forward fast, which would destabilize the defence of Atletico. 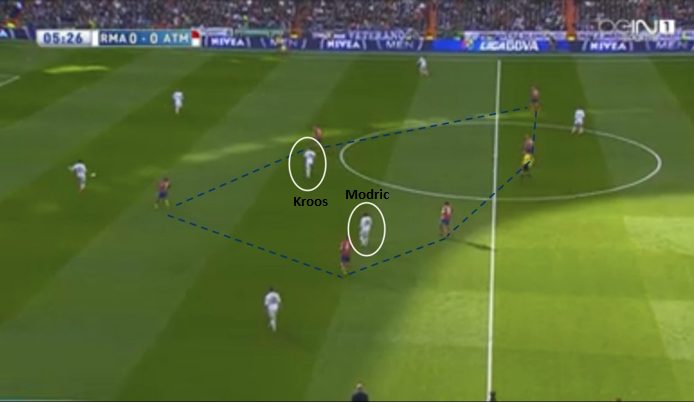 Serving as custodians of the Real Madrid game, Kroos and Modric are surrounded by Atletico midfielders and forwards. 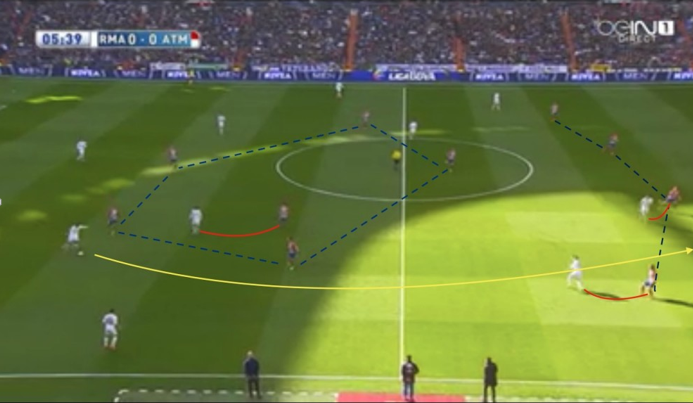 The first option for Real Madrid was to create enough space to have enough time to find attackers via direct play. 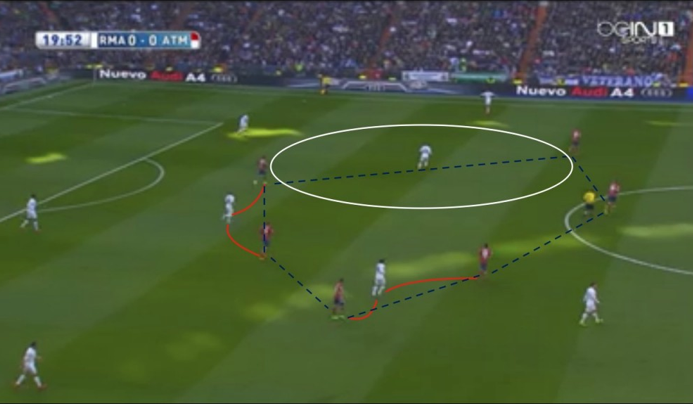 It was hotly contested between Real Madrid and Atletico. The beginning of the match was an opportunity to see a real battle in midfield. Both teams were aggressive and it took about ten minutes to see Atletico finally settle in the half of their rivals.

We then find the second scheme expected in this match, with Real deployed on Atletico’s side, they face a red and white defensive block. Simeone's team dominates the heart of the pitch, leaving the sides to Madrid, who rely on Kroos to exploit this width.

The problem is that Danilo and Carvajal struggle to find each other in attack. On this point, the absence of Marcelo, whom is able to create from nothing, is felt. Ronaldo has little space and James is only a shadow of himself out on the right. Moreover, the incursions of Isco and Modric are rare and mostly well controlled by the three defensive lines of Atletico. 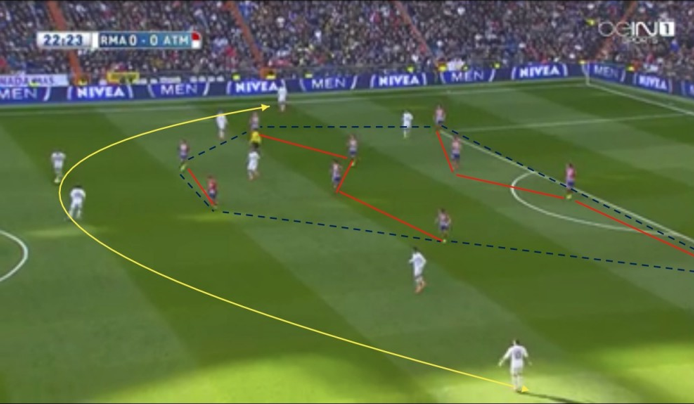 Facing a tightened block from Atletico, Real has room to play out wide, but only until they reach the last 20 metres.

Beyond failures out wide, the real issue for Real Madrid is ultimately the same as the one we knew about with Rafa Benitez. Sequences in the attacking half barely find the attackers who are often hidden behind the midfield or behind two opposing defensive lines. Without fixing this aspect in the heart of the game, it is difficult to destabilize the Atletico bloc that simply slides well to control the attacks. 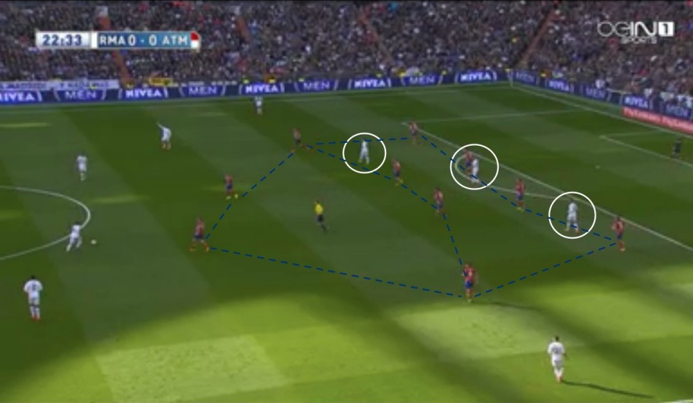 The “Benitez Syndrome” is still in effect: the attackers are completely alone in the opponent’s defensive block, far away from their support. 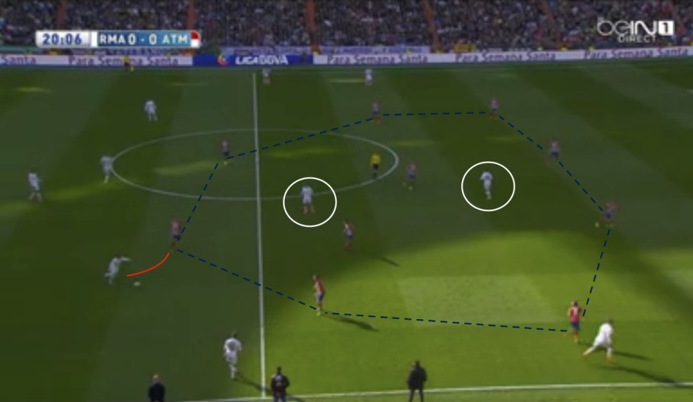 All was not necessarily negative for Real Madrid in the first half. They were vigilant and active on the ball when Atletico did turn it over. Regardless, the Colchoneros struggled to get out of their own half and reward themselves for the good work their defence was putting in. Nevertheless, even if Real managed to scrape higher than their usual outlets, they do not turn into fast counter-attacks. 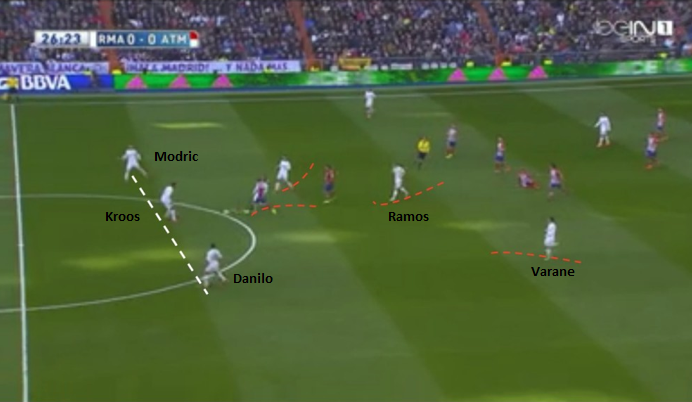 Modric, Kroos and Danilo react quickly to prevent Atletico from advancing. Ramos and Varane are recovering the “crumbs.”

In front of the goal, Atletico struggled to exist offensively. When Augusto Gabi managed to find his partner he found himself in big trouble: Griezmann is inspired but relies on the mobility of Koke or Saul to turn around the pair of Kroos and Modric.

As soon as Atletico managed to find Griezmann in the midfield, Real was in big trouble.