It was 20 years ago. March 19, 1996, when Bordeaux, led by three future world champions (Zidane, Lizarazu and Dugarry) were playing away at AC Milan in the quarterfinals of the UEFA Cup. Beaten 2-0 in the first leg, they reversed the trend by winning 3-0 in a highly charged Parc Lescure. To this day, it remains one of the best games played by a French club in the European Cup.

Around this triplet of talent, of which we must add Dutchman Richard Witschge, Bordeaux is a team of "duty players.” Twenty years later, some are still at the club, such as Jean-Luc Dogon and Philippe Lucas who work for the training center.

The Milan side is most certainly not the one that stepped on Europe in the early 1990s but it remained a quality side at the European level, none-the-less. The names they line up in defense impress (Panucci, Baresi, Costacurta, and Maldini) and the presence of Desailly in front of them says it all. In front, is the Weah-Baggio tandem.

The primary objective of Bordeaux is to start off strong. After the 2-0 defeat in the first leg, a goal conceded may terminate their already slim hopes of qualifying.

The Girondins start the match by putting a lot of pressure on the ball and displaying a heavy presence in tackles. The objective is clearly to put AC Milan under pressure in their own half, especially since Fabio Capello starts developing a little rhythm. The Italians await their opponents in their own half, hoping probably to trap thanks to the speed of George Weah.

To ensure balance, Gernot Rohr put Philippe Lucas in front of the defense. His job was to monitor Robberto Baggio wherever he goes. This leaves only Weah between the two central defenders, Dogon and Friis-Hansen.

When the Girondins attackers disrupt the opponent's recovery, it allows them to manage the depth and long play of Milan. The speed on the sides from Toyes and Lizarazu also helps fill the gaps that may exist out wide. 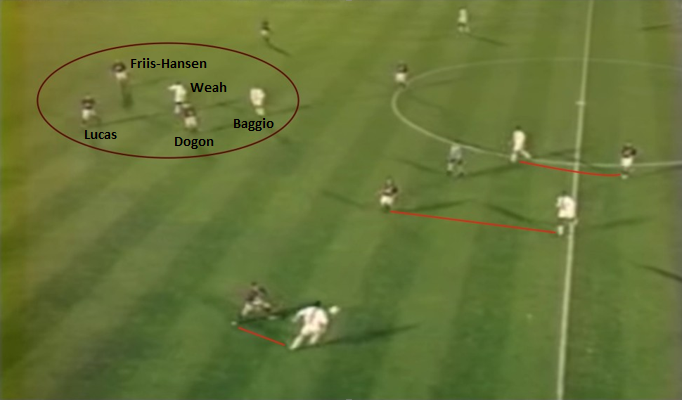 Under the cover of their teammates, Lucas, Friis-Hansen and Dogon control the movements of Baggio and Weah. 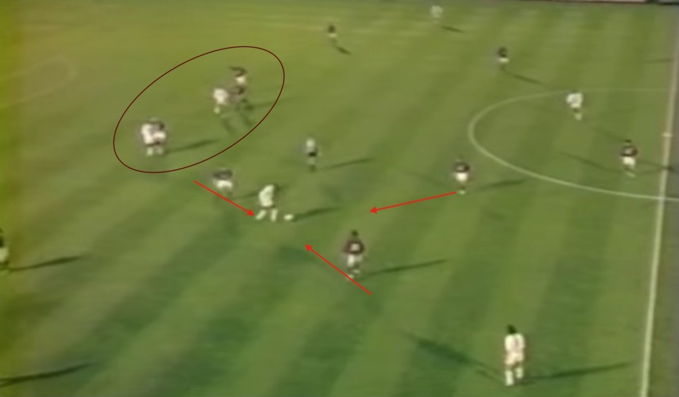 To control the short-game, Bordeaux relies on their midfield and forwards to come shut down their marks.

The problem for the Girondins occurs during the limited time when their pressing relaxes and AC Milan has time to press forward. Bordeaux’s defensive structure suffers due to the specific instruction given to Philippe Lucas. The advanced position of Roberto Baggio often pushes the defensive line. This creates gaps in the middle, especially between Zidane and Witschge, who are defending too far outside and leaving space behind them.

AC Milan rides a strong relationship between Baresi and Albertini, who switches quickly with Vieira to find a central position. When not pressured, the defender uses the interval between Zidane and Witschge to find an outlet. This then causes one of the backs (Dogon, Lucas or Friis-Hansen) to step-up, creating a two-against-two between the rest of the defense and the tandem of Baggio and Weah. 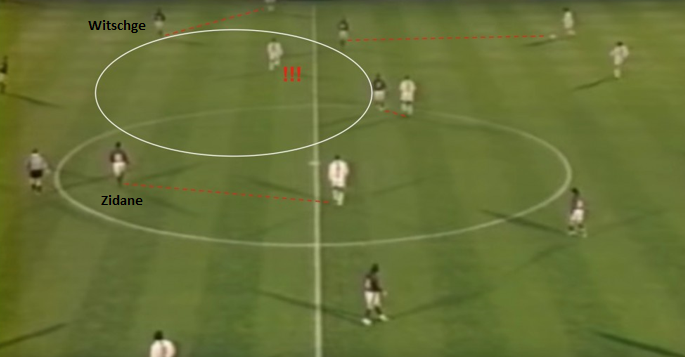 When Bordeaux allows time for Milan to push out, they have to use space between Zidane and Witschge. 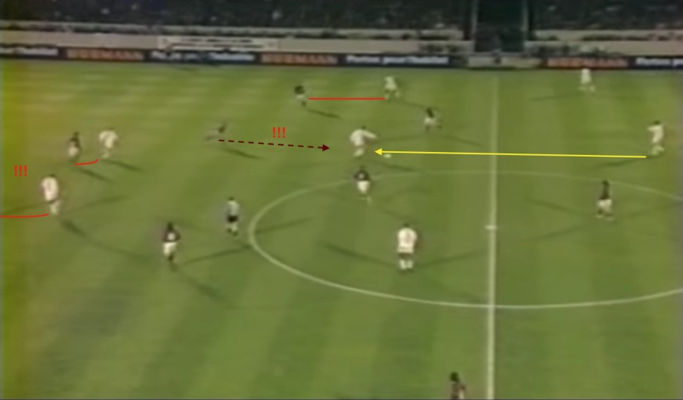 When this happens, it forces a defender to step-up which creates a dangerous two against two situation behind him.

Fortunately for the Girondins, AC Milan struggles to string passes together. They also suffer from a lack of creativity from midfielder Marcel Desailly. Too many times he slows down the match and allows Bordeaux to reposition.

Late in the first half, the Girondins are also able to regulate one of their problems by finding a more conventional structure to deal with the counter-attack of AC Milan. Behind Tholot and Dugarry, Zinedine Zidane finds himself at the tip of a diamond in the middle which sees Dutuel and Witschge defend more inside the field than before. 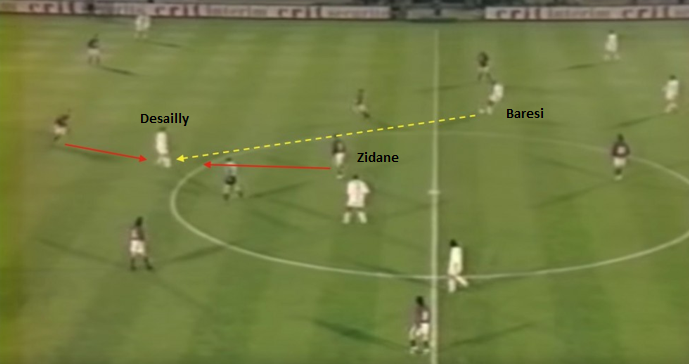 Desailly is served by Baresi, but he is unable to turn which allows Zidane to close from behind. 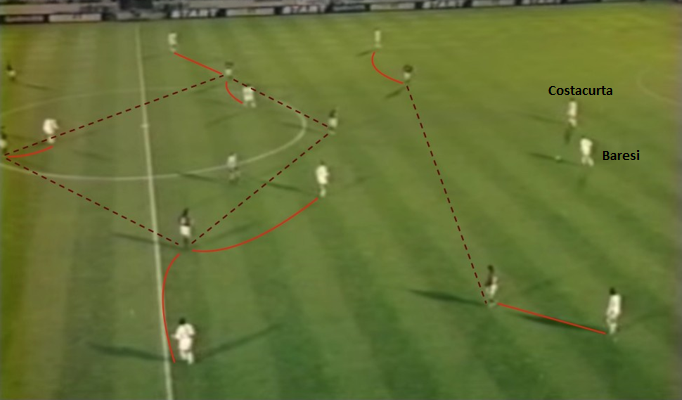 The 4-4-2 diamond allows the Girondins to better manage their assignments in the center, especially when the tandem of Costacurta-Baresi have the ball.

…and that’s How The Match Was Won!