The difference in reference points leads to huge differences in how zonal and man-oriented defences operate in terms of speed and style of access, shape, and number of players in each duel. In turn, there are also large differences in how attacking sides approach these types of defences. The methods a team use to get free from man-marking is called dismarking, and this article will detail one way it can be done.

Man-marking seeks to pitch the game into a series of 1v1 duels with each defender responsible for an opponent. As such, being able to get free from an opponent on an individual level can be the basis to unbalance the opponent’s whole structure.

In these situations, attackers (any player whose side have the ball) have a crucial advantage: they are aware of their movement before the opponent, the opponent can only react. On an individual level then, feints or “double movements” are a common way to create the separation from a marker to receive the ball. Double movement here simply refers to when a player moves in one direction, before moving in another, usually the opposite. 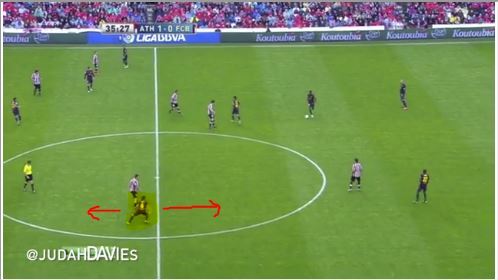 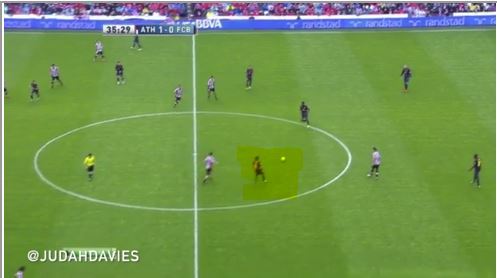 Although the attacker has a natural advantage in being able to start their movement before the opponent, there are ways around this disadvantage for the defender. With this dynamic advantage, the defender needs time to react and re-position themselves, and in football distance is the key factor influencing time. The further away from the ball an attacker is, the longer the pass will take, and the more time the defender will have to adjust themselves.

It follows then, that attackers should seek to shorten the distance between themselves and the ball when moving to evade a marker. This is key in exploiting the advantage that the attackers naturally possess. 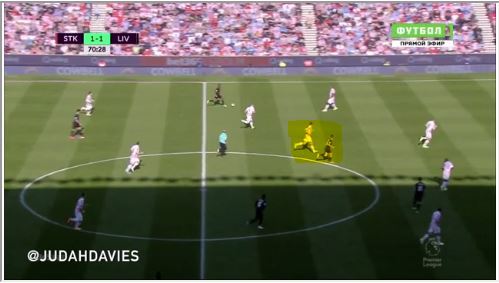 Here we see the distance being shortened while dismarking 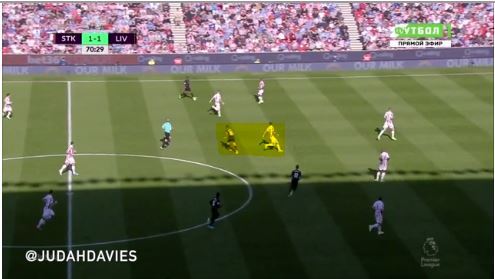 When aiming to get free from an opponent to receive the ball from deep, there are different directions in which double movements can be used. A common route is for an attacker to move towards the opponents’ goal, threatening to run in behind the opponent, before quickly changing direction and coming short to receive. Alternately, the attacker could come short initially, before running into depth.

In a double movement, the initial movement is used to increase the space for the attacker to move into in the opposite direction. Due to their man-orientation, the defender follows the initial movement, but are already slightly disadvantaged due to starting their movement later than the opponent. This often leads to the defender speeding up to reach the attacker in time for the ball’s arrival. This increased speed from the defender means they will take longer to re-adjust when the attacker changes direction, and the separation is thus increased. Neymar is an example of an attacker who uses double movements extremely well.