Introduction: This training session is about having the players receiving the ball with good control and having a positive attitude towards finishing on goal. Various offensive movements will be carried out by the players in order to create and exploit the momentarily numerical superiority that might come up during a match.

Developing the eight structures that form the player.
Bio-energetic: Energy and appropriate hydration to keep focused.
Conditioning: Apply and maintain explosive football actions.
Coordinative: Stance, oriented first touch and the quality of finishing on goal. Be able to play with both the left and right foot.
Cognitive: Identify the right moment to finish at goal and providing support to the player with the ball.
Socio-affective: Collaboration, verbal and non-verbal communication, angles and distances between the ball-carrier and teammates and also taking into consideration the positioning of the opponents.
Emotional-volitional: The right attitude to finish on goal.
Expressive-creative: Let the players be creative in their own way on getting past the defender.
Mental: A strong mentality to be successful. Compete with one’s own ability.

The training session:
Aim: Finishing at speed and with accuracy on target.
Level: Under 10 to under 12 (medium to high ability).
Duration: 90 minutes.

Stage 1: Coordination and cognitive tasks with the ball.

We introduce the players to working in rhythm with each other while performing different type of motor movements. 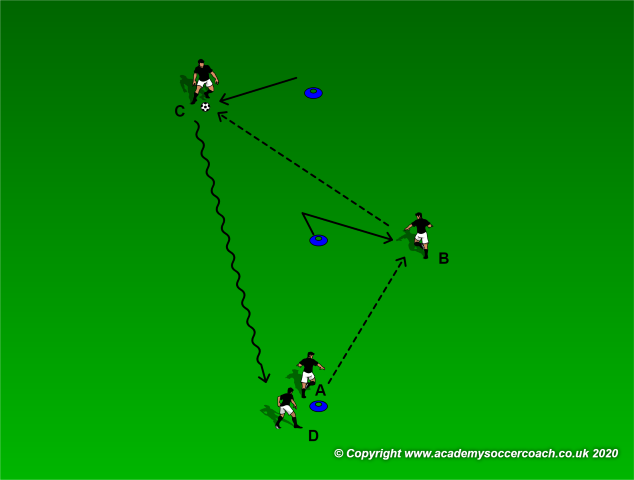 Description: Player B moves at an angle to receive a pass from A. At the same moment player C opens up in the opposite direction. The ball is played to player B who receives it with an open body and passes it to player C. Player C dribbles the ball to the first cone. All the players move one position forward. Player A moves to the middle marker, player B moves to the third marker, while player C moves to the first marker and waits for the next turn.

Coach the players on: Quality of passing, receiving with an open body and supporting the player with the ball.

We connect the training situations in this stage to the bigger picture, which means the realism of the global game. This are smaller chunks of the whole puzzle but with an intended direction (aim of the session) in mind.

Training situation 2: 2v1 to finish the attack at speed. 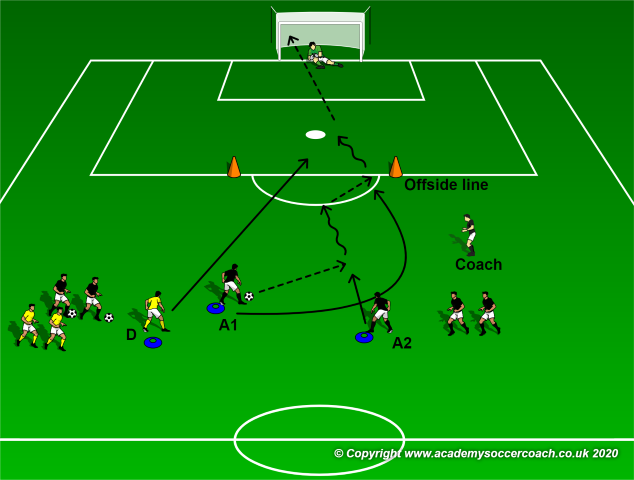 Organization: The area should measure approximately thirty yards by twenty yards. A regular goalpost is positioned at one end. The players are divided into two groups of attackers A1 and A2 and another of defenders D. Players A1 and A2 are positioned five yards from each other with A1 just a bit in front of A2. D1 starts two yards diagonally behind A1. Player A1 starts with the ball.

Description: At his discretion player A1 passes the ball to player A2 to control and dribble forward at speed. Player A1 overlaps player A2. The situation becomes a 2v1 in favor of the attackers. The defender comes into play immediately when the ball leaves player A1’s foot. The offside line is in effect from the edge of the penalty area. To score the attackers must dribble through the ten-yard gate before finishing on goal. If the defender wins the ball he passes it to the coach.

Variations:
1. Vary the distance between the defender and attacker A1.
2. This practice should be performed from both sides.
3. The defenders have another defender positioned between the two cones that form the gate.

We aim to finalise the session by working on the main aspects of the session to refine and consolidate them within the game. In these two games we focus on improving the players’ performance in the game converting scoring opportunities at speed. For the players to mentally assimilate this game with the regular game, the scoring opportunities and problem solving in this sector must be constantly repeated. The situation must also be as close as possible to the real game. 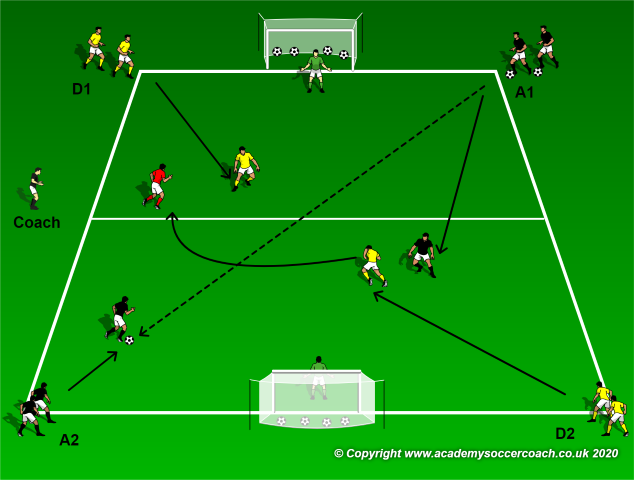 Organization: The area measures twenty-five yards by sixteen yards. A regular goalpost is positioned at both ends. The players are divided into two teams and a neutral player. The players of the same team are positioned at opposite angles as shown in the diagram. The neutral player stays in the middle of the practice area. Each team has a goalkeeper in goal. The ball starts from the designated team.

Duration: 15 minutes. Play in series of three minutes each with one minute of rest in between.

Description: Attacker A1 passes to attacker A2 who comes short for the ball. The situation immediately gets to a 2v2 plus the neutral player (red player) who plays for the team in possession. The neutral player is allowed to score. The offside rule is in effect from the marked middle line. 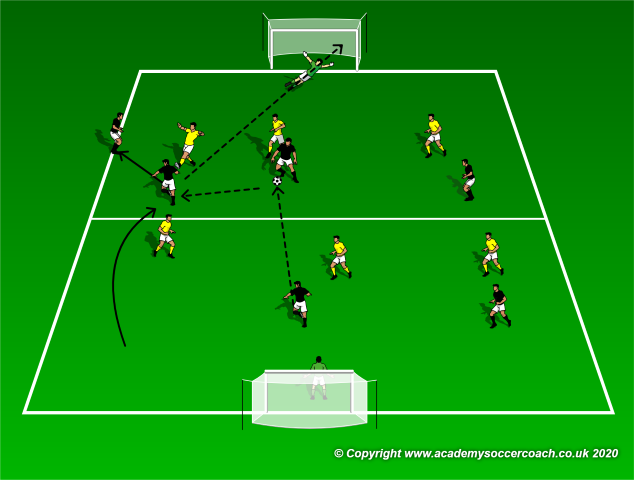 Duration: 30 minutes. Play in series of three minutes each with one minute of rest in between.

Description: The players must remain in their respective half of the pitch. One of the defenders can join the attack to create an overload of a 4v3+GK in the offensive half. When the ball goes out of play, or there is a turnover in possession, or a goal is scored, this player must drop into the defensive half.

Players are paired and perform a juggling competition between them. This should be followed by static stretching exercises and a quick Q and A with the players to recapitulate the key points of the training session.