Analysis of Italy’s two pivot players Jorginho and Cristante in the 2022 world cup qualifier match versus Lithuania played on September 8 2021.

The pivot players’ behavior during the offensive organisation phase.

Italy started the match using a 1-4-2-3-1 system operating within an associative style of play.  The match was dominated by the Italian side winning by a 5-0 scoreline. Lithuania’s intention was to defend in a medium to low block majorly using a 1-5-4-1 system knowing their side’s limitations against the current European champions. 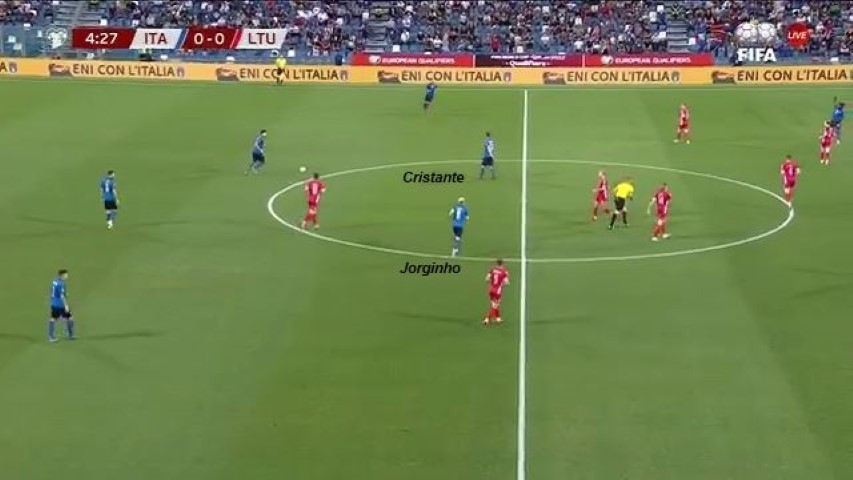 Figure 1: Jorginho and Cristante operating as the base of a midfield triangle.

Italy’s two pivot players (commonly known as the central defensive midfielders) Jorginho and Cristante worked wonderfully well together with the level of communication between them and their midfield triangle counterpart Pessina being of the highest quality.  The two identified when they were required to be available behind the first line of pressure during the initial stage of the build-up in order to create more playing options to progress into midfield, or if one of them had to drop with the back line.  The latter move was successfully implemented to get Jorginho receive the ball unmarked and dribble into midfield creating a numerical superiority in this sector.  In this case Cristante remained in the pivot role between the opponents’ forward and midfield lines. 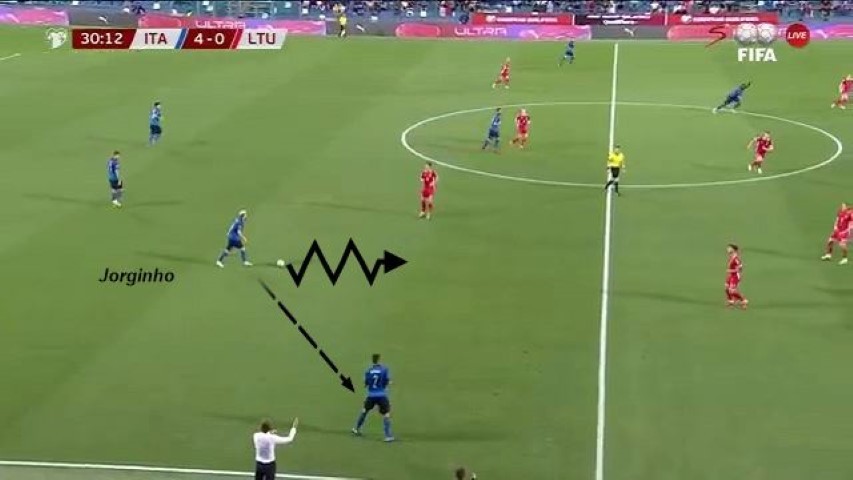 In other situations (see the below image) when Lithuania were defending in a medium block, Jorginho was positioned behind the single forward forming a diamond with the two center backs Acerbi and Bastoni and with the left full back Di Lorenzo.  The two pivots did not play the whole match side by side on the same horizontal line.  Jorginho had the role of the playmaker constructing play from the back, while Cristante played most of the time in a more advanced position.  This enabled the team to create more lines and therefore better options to play forward. 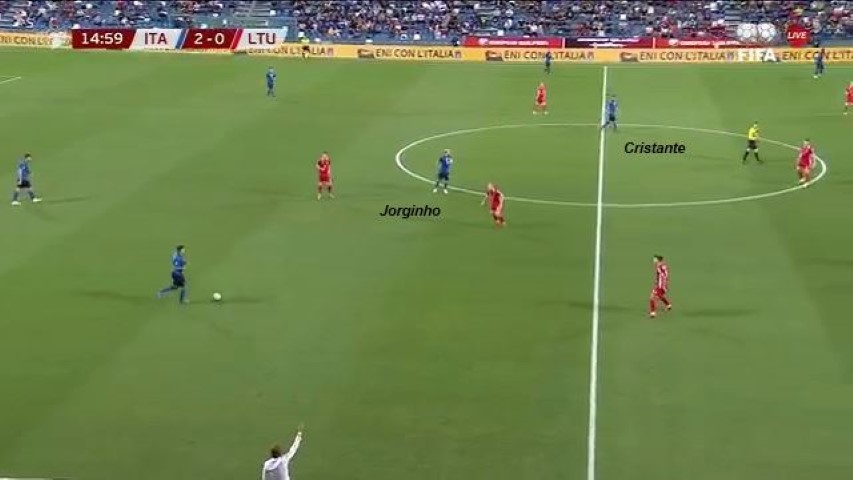 Figure 3:  Jorginho and Cristante on different vertical and horizontal lines.

The two players continuously adjusted their positions according to the specific needs of a particular situation.  The team’s intention was to create overloads in the inside channels and try to penetrate centrally.  Jorginho and Cristante played a huge role in this by being positioned between the lines.  As such, third player combinations with the aim of finding the free man were possible.  If this couldn't be achieved Italy would switch play to either side of the pitch.  On the left side Italy had the left full back Biraghi wide and high while on the right flank Di Lorenzo and Bernardeschi communicated very well between them and with the apex of the midfield triangle Pessina.  This provided Italy with many options from where they could advance.  On the other hand it created many stressful situations for Lithuania who found it very hard and were very often unsuccessful (especially in the first half) in controlling Italy.

In the image below Cristante is positioned diagonally in front of Jorginho.  A third man combination with the latter could have been carried out in order to unlock spaces.  Cristante was already in an advanced and unmarked position creating options for Italy to break lines. 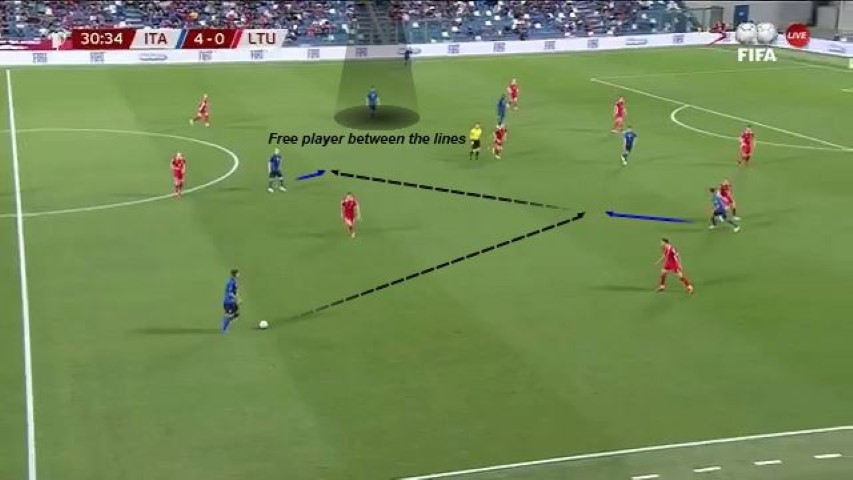 Figure 4:  Third man combinations could be used to find free players between the lines.

When building up from the inside channel and one of the two pivots dribbled forward with the ball, the other provided emergency support.  We call this emergency support as Italy’s first intention as a team was to play forward and break lines.  However, if the player on the ball was pressured he could still retain possession by passing to the player providing emergency support. 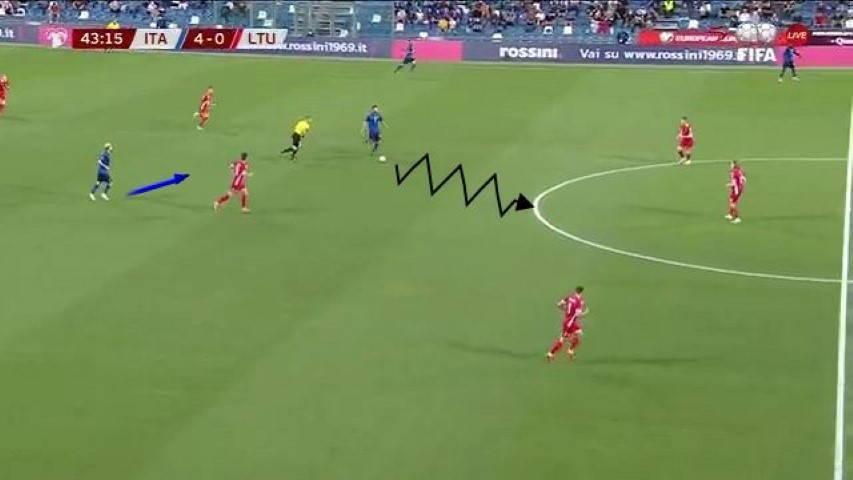 Figure 5:  Providing cover and emergency support to the ball-carrier.

The pivot players’ behavior during the defensive organisation phase.

During the defensive organisation, Italy’s two pivot players carried the role of the traditional central defensive midfielders; they prevented the opponents from reaching their forwards positioned in dangerous zones and also to regain possession of the ball.  Their position enabled the team to restart quick counter attacks whenever the ball was recovered.

When the opponents had the ball in any of the outer channels and the full back applied pressure on the ball-carrier, it was the closest pivot player who supplied him with cover.  In the below image the right full back Di Lorenzo moved to apply pressure on the opponent with the ball while Jorginho covered him.  In the same image we must also point out that the other pivot (the one to the right side of the referee) should have dropped slightly behind the center line to provide further cover and balance in midfield.

Figure 6:  Providing cover to the full back applying pressure.

On open balls and when the opponents were going to play long, the two pivots plus the most advanced midfielders dropped close to the back line.  By doing so they created overloads around the ball and increased their chances of winning both first and second balls. 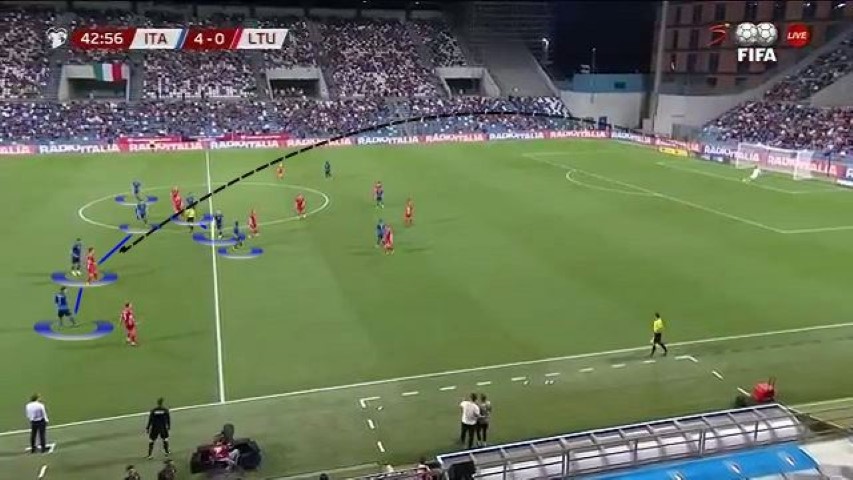 Figure 7:  On long balls the distance between the back and midfield lines was reduced in order to create numerical superiority.