In this match, Zinedine Zidane may have measured the road that still separates him from the great coaches. Facing a veteran, the "young" Zizou remained helpless, watching his Real Madrid side stumble over a well-organized team. It took a flash of brilliance from Ronaldo in the 57th minute to unlock this meeting and then and extra one from Jesé at the end of the match to take the points. Real almost qualified for the quarter-finals with this win, but they are still far from being a contender for the Champions League title.

The absence of Bale in the Madrid camp forced tough choices: Isco and James both started the match. On the Roman side, Spalletti did not change his old habits lining up in a 4-3-3 with no real center forward (Perotti) and two very quick outside strikers (Salah and El-Shaarawy).

It takes two to make a match and Real struggled for almost an hour, due to the game plan set up by Luciano Spalletti. Returning to Rome after leaving Russia, the Italian coach has left nothing to chance.

Defensively, Roma disrupted Real on all opportunities. Without over-pressing, which could quickly become dangerous when facing such quality technicians on the ball, the idea was to oppose the short build-up of the Spaniards. It was definitely not to leave enough space to players like Kroos, Modric and Ramos to play and be able to find Ronaldo or Benzema.

Once Real made it 30 meters out, Roma would position themselves with a central defensive block with Perotti as the point level with the center circle. Varane and Ramos were left free, the center forward concentrating on Toni Kroos. 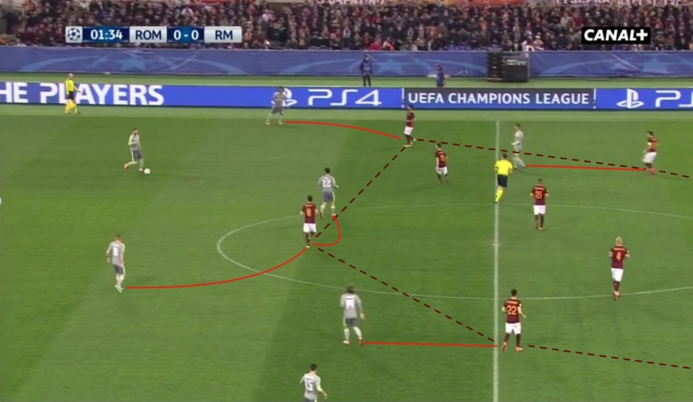 Faced with such a dense block in the core of the field made it difficult for Real to create opportunities centrally.

Rather well positioned, Roma did not leave many opportunities for Real Madrid to advance initially. Real was forced to mainly play down the sides, via passes down the sideline for a service in order to try and circumvent the opposing block.

Facing a block consolidated and disciplined, Real wanted to maintain possession of the ball. Modric, Isco, Ronaldo and James offer themselves as options to Kroos, Ramos and Varane and help move the ball. The problem is that this is not very efficient without movement.

The other concern for Real Madrid was when they were in recovery and the lack of effort from Raphael and Varane. Often, the French player was released by his teammates, but most of the time, he refused to attack the space opened up in-front of him. 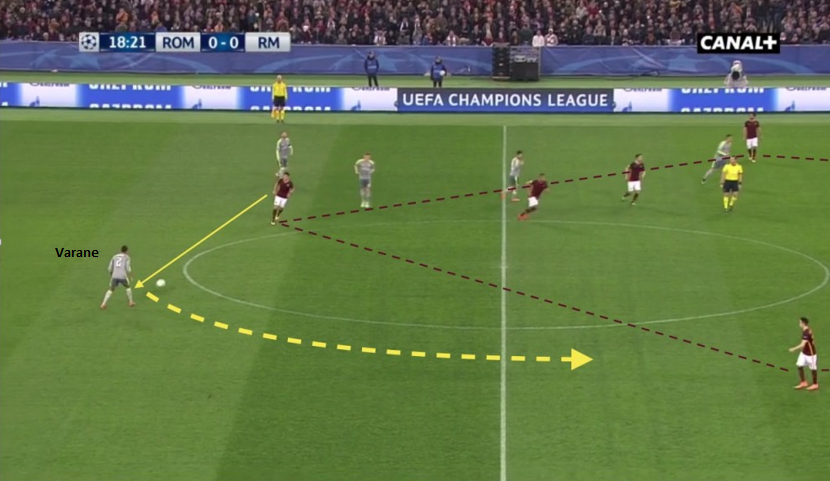 The Romans fixed their block on the left-side. Varane receives the ball and has clear field in front of him. 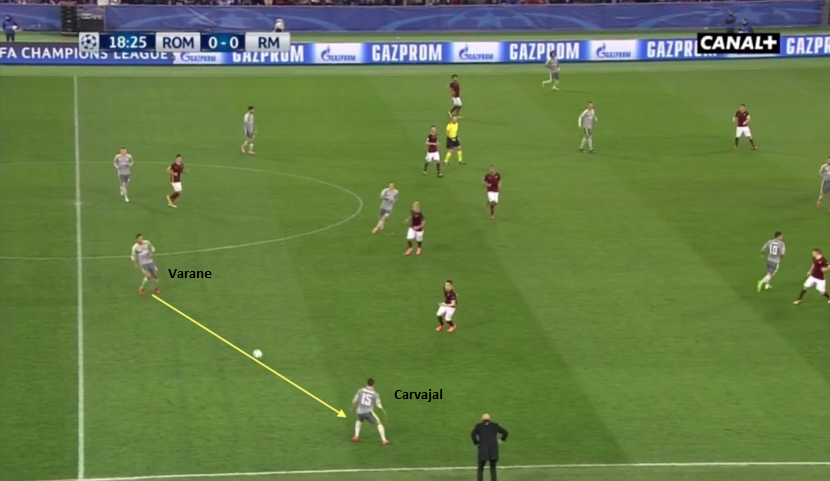 …but, the Frenchman does not take any risks and instead plays laterally to Carvajal, eliminating the gap created from the start.

Besides a resurgence from the French, Real also suffered from a lack of purpose from what they were doing early in the match.

Expected to help and offer options centrally, Modric and Isco were marked out of the match early on. Their lack of movement greatly helped the Giallorossi early in the match, the latter having to only chase Benzema around. 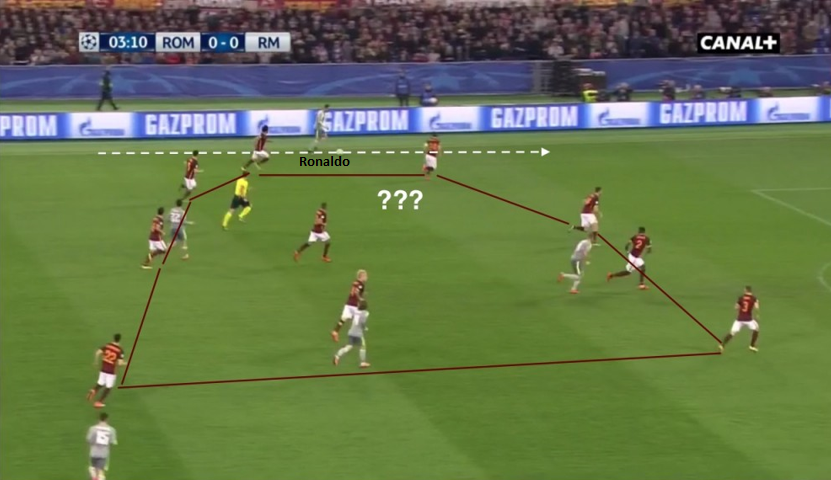 Ronaldo makes a run down a channel on the left-side, but isn’t really dangerous due to the lack of support.

The Madrileños had to resort to using set pieces (corners, free kicks) on the sides to be able to tighten the distance between Modric and Isco and be able to find them in small spaces. It was also during these times that Real Madrid was able to recall that they were part of the elite technically.

As the minutes passed, Isco and Modric took more initiative and began to combine with the wide players. In support of these actions, Kroos brought them his passing palette to play in the intervals or switch to the opposite side. Nothing spectacular, however, since Roma was rarely out of position. 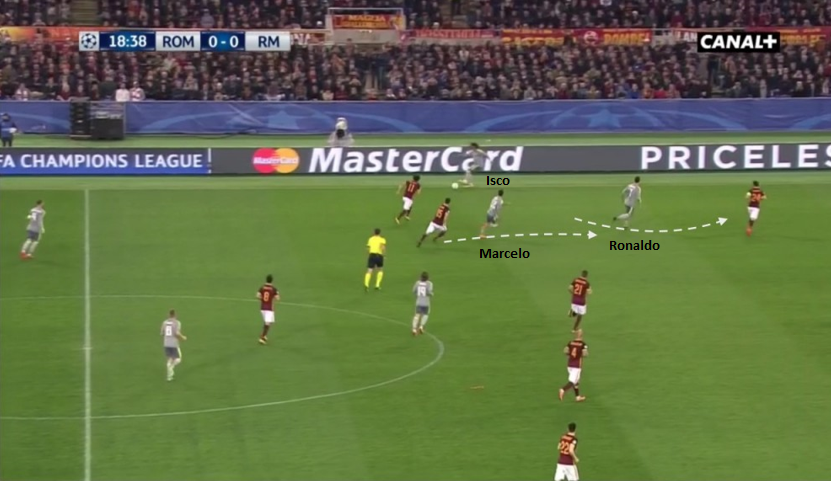 Playing the ball out wide to Isco on the left inevitably creates more space for Marcelo and Ronaldo. 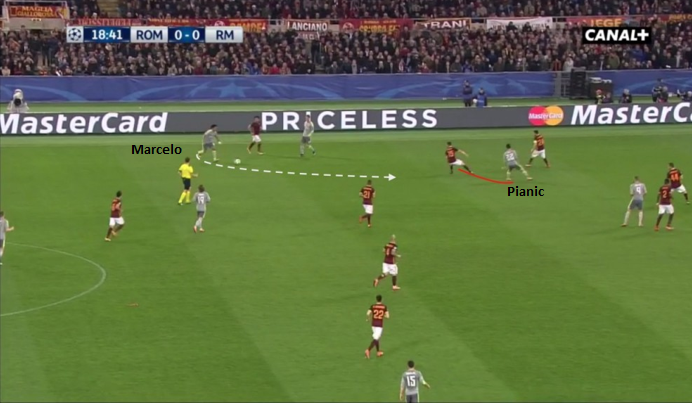 Pianic opening up space for Marcelo. 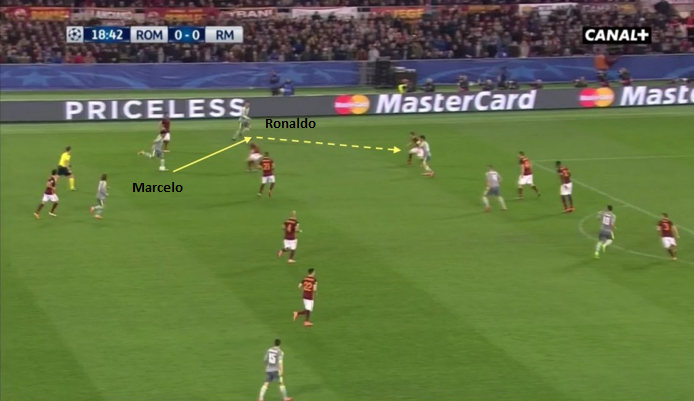 Marcelo plays Ronaldo along the sideline. 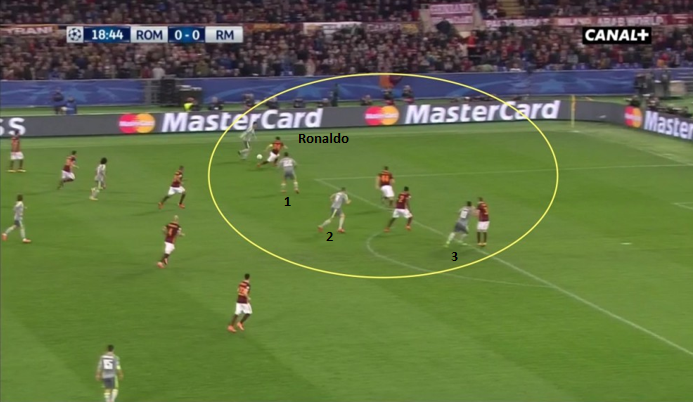 Ronaldo is released into a 1 vs. 1 situation with three options just outside the penalty area.