This is the time of the year when the going gets tough and the clubs that eventually go on to claim the honours in May, are really forced to elevate their game to a whole other level. The Champions League semi-final is always a match that requires not only preparation and hard work in training, but also a bit of luck. In addition, it also demands some performances that are ‘extra’-ordinary. Last season, Lewandowski stole the show against Real Madrid and Bayern Munich’s collective brilliance was too much for Barcelona to overcome. This season however; the tables were turned on Bayern Munich, as Real Madrid; led by Carlo Ancelotti, executed a devastating plan that left Bayern on the wrong end of a 5-0 aggregate score line. Guardiola’s possession based approach, which has certainly had its day, now looks like a bit outmoded.

Since 2008, Pep Guardiola has established himself as one the best managers in world football. His teams have consistently played fantastic football and have produced result after result. However, one of his weaknesses as a coach was exposed quite brutally in the second-leg of the Champions League Semi-final in Munich. Of the 4 goals that Real Madrid scored in that leg, two of them came off the head of Sergio Ramos, as the Spaniard took his goals tally past his red cards for the season. There was a clear pattern to how these goals were scored and two weaknesses in the Bayern organisation for set pieces were revealed. Real Madrid did score a total of 5 goals in the tie, but it was these first two goals from set-pieces in the second-leg that ultimately decided How The Match Was Won.

It was when defending corners that one of Bayern’s primary weaknesses on set-pieces first became evident. By noticing the starting position of the Bayern players just before a Real corner; one of which resulted in Ramos’ first goal, we notice that the Real players were on the run as they were approaching the ball; in contrast to the Bayern defenders who seemed to be back on their heels, locked-in position and ready to deal with the threat Real was offering. 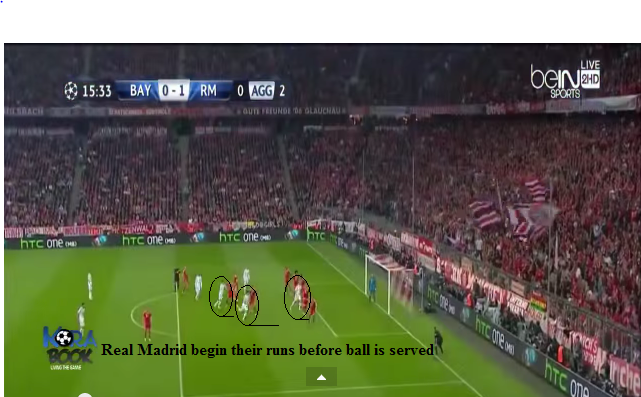 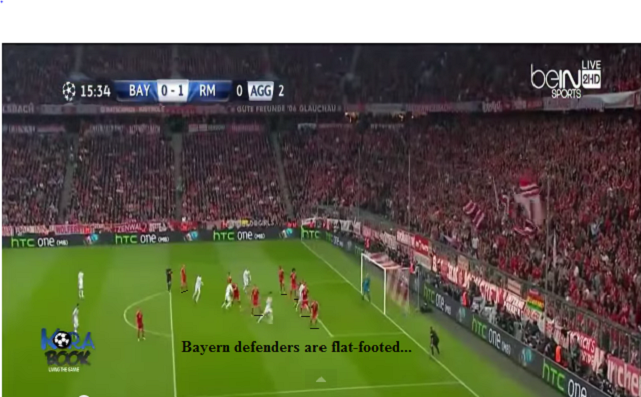 …as the ball is served in from the corner we can still see the positive and aggressive movement towards where they anticipate the ball’s flight to take it from Real, while we also continue to see Bayern players remain flat-footed and offer very little counter-movement at all. 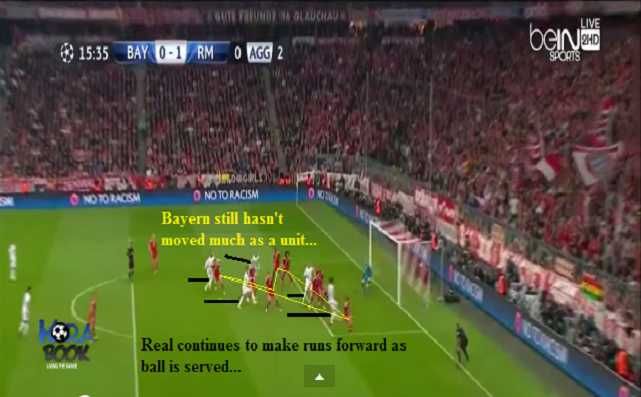 However, the Real players got the jump and made early runs into the box, which unfortunately for Guardiola caught his players asleep and forgetting to fully mark their counterparts all the way through the end of play. 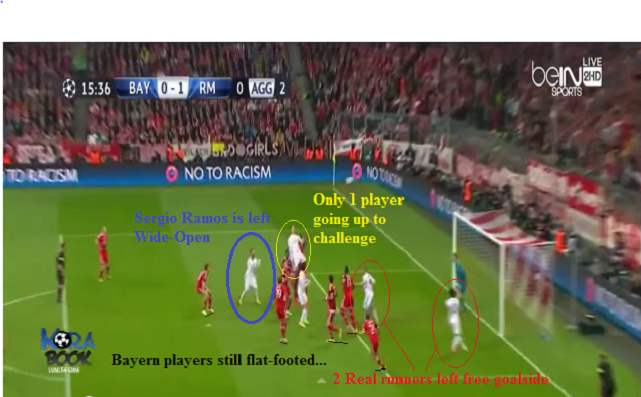 You can see that the defence is well organized and there is no dearth of numbers from a Bayern perspective. Guardiola needed to ensure that his players were tighter in their marking to stop Ramos’ goal from going in. 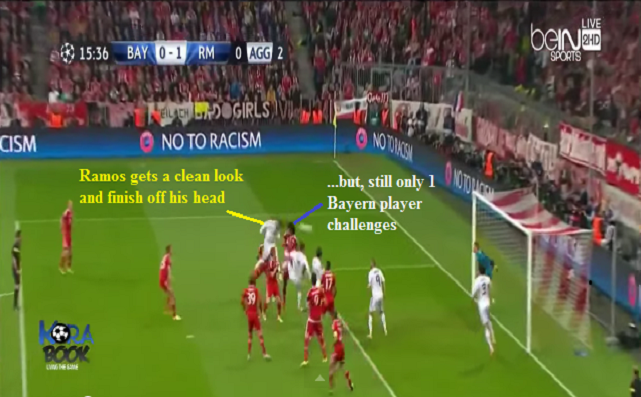 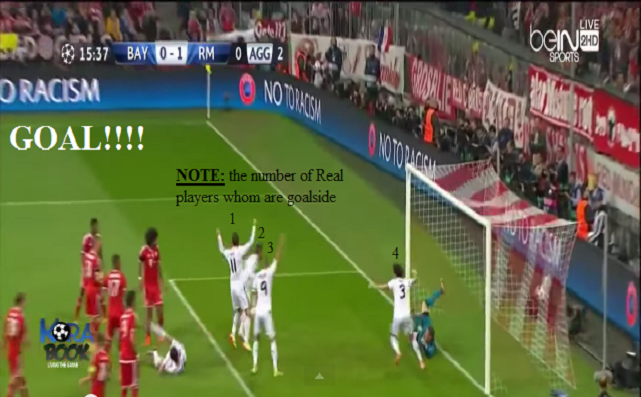 For the second goal, Bayern made a fundamental mistake with respect to their organisation. Usually, one looks to maintain a defensive line that is a little high, so as to allow their keeper ample space to come off their line and collect the ball (re: owning their box); however, at the same time, this line cannot be too high, or the defenders will not be able to attack the ball.

The Bayern defensive line was positioned just inside the box on Ramos’ second goal. The choice to hold this high of a line combined with their already discussed problems with marking players offered Real the room they needed to attack. 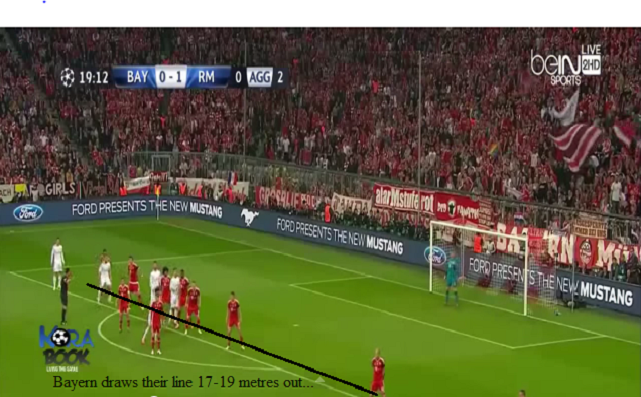 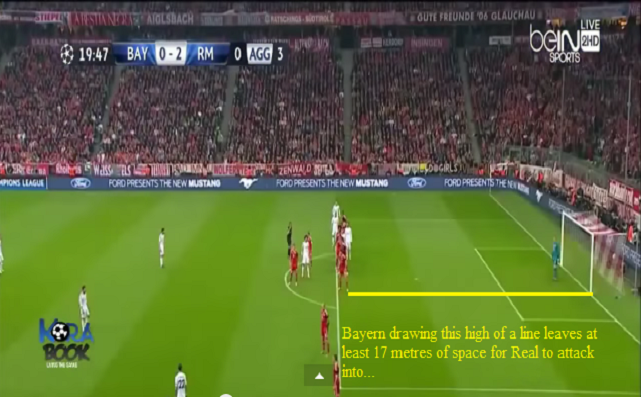 Just as was the case with the previously discussed corner kick, Real Madrid gets the jump on Bayern Munich with early runs into seams trying to get into this space behind the Bayern line. 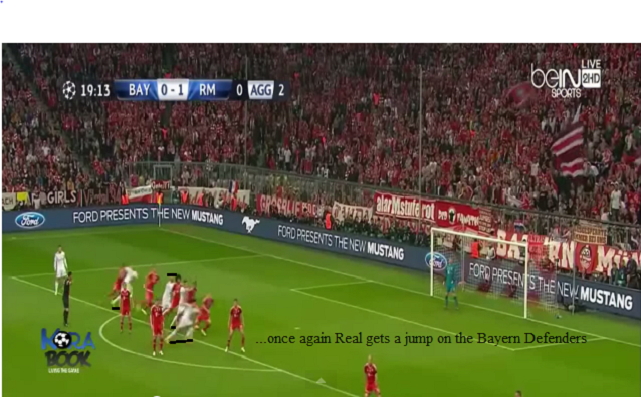 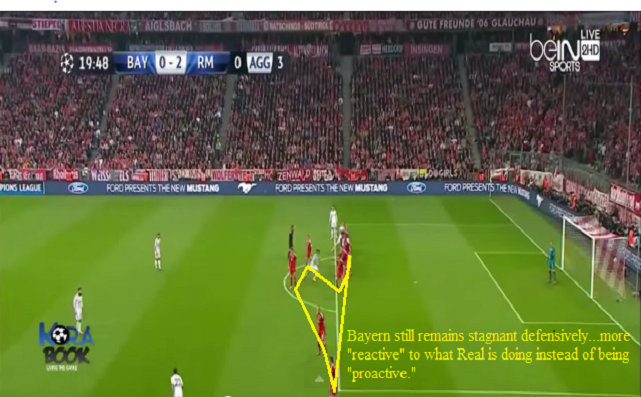 Not only did Bayern’s starting position leave a lot of space for Real to deliver the ball into; more importantly, it was also too much space for Neuer to cover and safely leave his line to come out and get any ball dropped just inside the Bayern line. 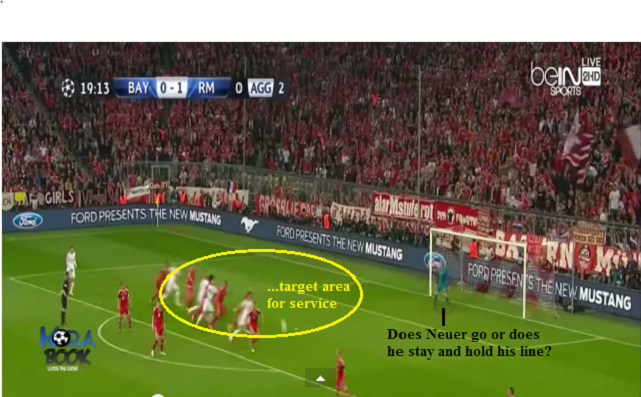 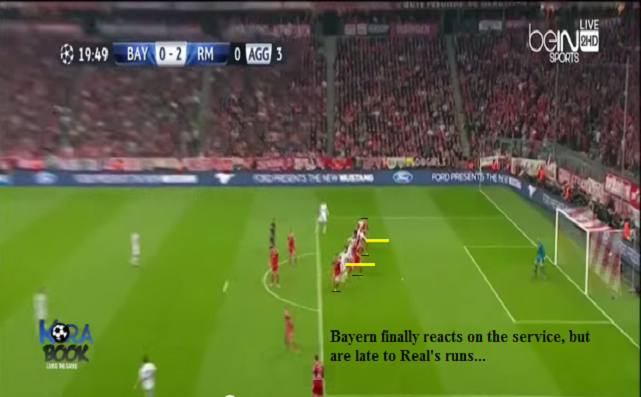 The second issue that this high line exposed was the act that Bayern was always going to be moving backwards. This motion isn’t conducive to winning headers and indeed, we have all seen a number of own goals scored by defenders running towards their own goal. Ideally, the Bayern line needed to be a little deeper. 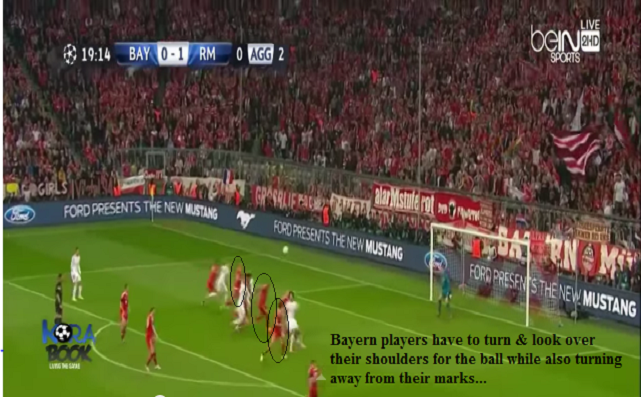 Just as was the case with the earlier corner that we discussed, Real Madrid were the only players to legitimately challenge the service. Also, due to the high starting position of Bayern’s initial line, Neuer is still locked-into his own goal-mouth with too much space to safely come-out and collect the ball. 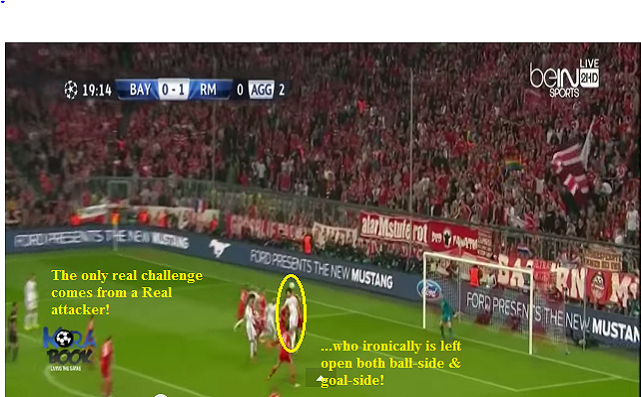 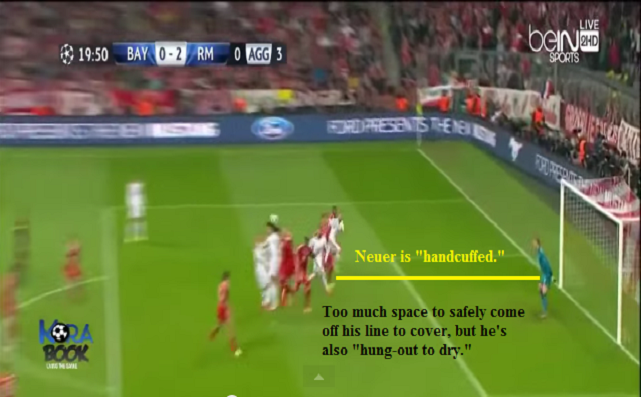 All of this combines to allow Sergio Ramos to once again slide through a seam in the Bayern defense and finish a header to put his side up 2-nil which is what ultimately is How The Match Was Won! 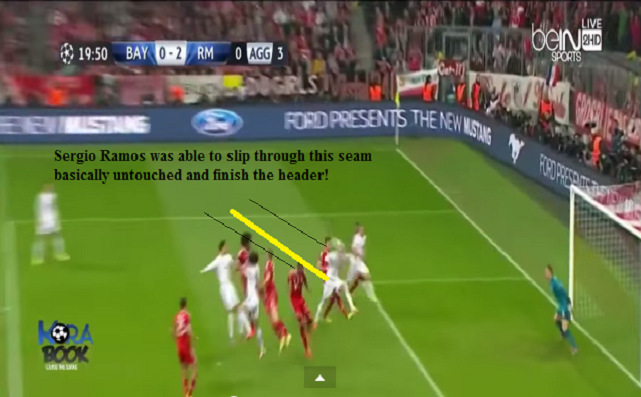