Creativity in the Final Third By Real Madrid

Real Madrid went into the European Super Cup match against Sevilla on the back of a summer of spending on big names Toni Kroos, and James Rodriguez. It will be hard for Carlo Ancelotti to balance his squad trying to accommodate Sami Khedira, Xabi Alonso and Angel Di Maria within the starting 11, but this is a task the biggest manager must face if they are to be successful. Angel Di Maria brought balance and stability to the team, and a high assist ratio, something which Mesut Ozil brought to Cristiano Ronaldo (it seems as though assists aren’t enough to stay at Real Madrid).

With the players they have, creativity and quality in the final 3rd is not in short supply. 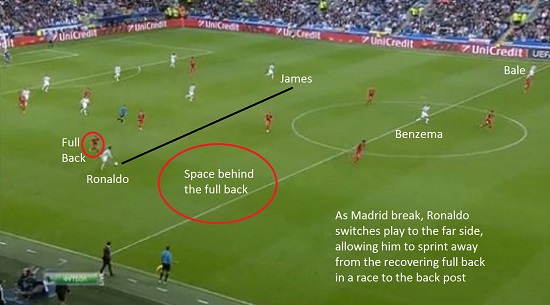 As Ronaldo switches play to James, Bale is wide to offer an outball should James be pressed. The main aspect of this scenario is that the full back has a race with Ronaldo to get to the far post, a race which he would have a chance with should Ronaldo run with the ball. If Ronaldo can run without it, he has almost no chance. 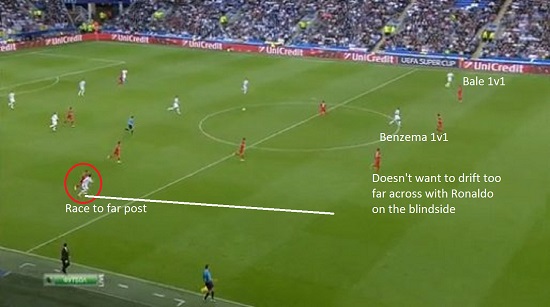 As the ball travels, the full back has caught Ronaldo, while the left centre back doesn’t want to drift too far across to deal with Benzema 2v1 as James could drill a backspin pass over the defence into the stride of Ronaldo from this position.

James to Bale who must time his cross perfectly 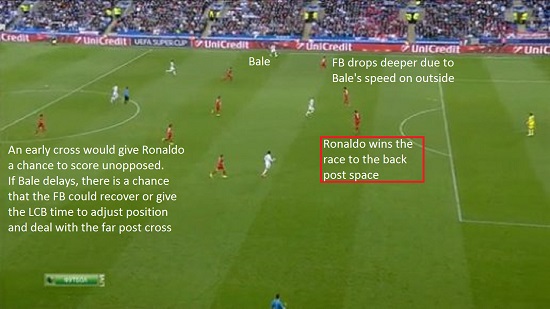 As Bale is a natural left winger, and is extremely quick on the outside, the full back drops off as he is worried about committing and letting Bale sprint past him. The space that Ronaldo is attacking is the space that the full back he is racing with needs to be in, but he can’t outrun Ronaldo.

Bale must find the correct timing for the cross to exploit the space that the full back hasn’t occupied. 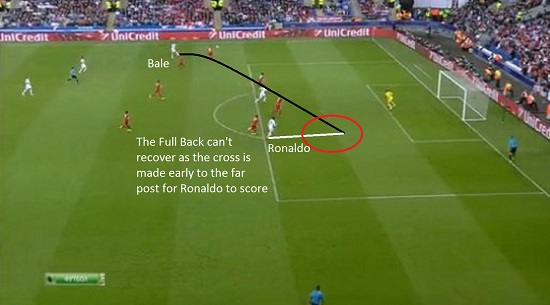 Bale puts the cross in before the full back can get goal side or close enough to Ronaldo to distract him from scoring. The cross going in at the correct time is the key aspect here; late, and the full back can recover, earlier and Ronaldo may not reach the ball, which is played into the exact position that a player defending the far post would be in.

Exploiting the defenders body weight being on one side 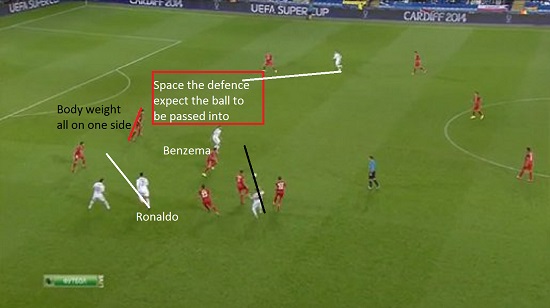 As this pass is rolled into Benzema, the expectation is that Benzema will pass diagonally into the space between centre back and full back, which Bale is running into. The central defender can see this and is already on the move, with all of his weight on his left leg.

As Benzema passes 1st time, the defender can’t recover as his body weight is going the opposite way from the pass, allowing Ronaldo to get behind him. Ronaldo’s body shape allows him to take a touch towards goal and accelerate instantly. 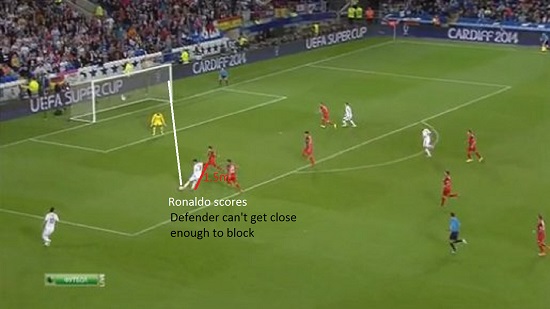 As Ronaldo’s body weight allows him to touch and accelerate instantly, the defender cannot get close enough to block the shot, and Ronaldo scores with a shot to the far corner via the GK. I feel that the GK is standing too close to the ball and cannot react enough to save the shot, had he been 1m back, he may have been able to react better and keep the ball out.

When we coach young players, we must teach them how to identify which passes can be most beneficial for team mates, and have them understand instantly what signs to look for during the pre-scan before receiving the ball. This sort of pass looks easy, but the recognition of the defenders movement and body shape is key to making sure that the defender can’t recover.

Attack vs Defense with Transition

Playing Beyond the Obvious

Being Creative with Free Kicks