Real Madrid was humbled by their rival on the 22nd round of La Liga fixtures. With a defense reduced to a reserve squad due to the absences of Ramos and Pepe, Carlo Ancelotti's men didn’t even have a chance to compete. Within the first 20 minutes, the Colchoneros were 2-0 and were continuing their momentum, seemingly creating opportunities at will throughout the match. Proof of Real’s impotence: they only took 4 shots compared to the 17 taken by the residents of the Vicente Calderon. For 10 years, only Barcelona (3 times) managed to limit the Merengues to within 5 shots in a single match.

Real Madrid was playing amputated without their two central defender. Carlo Ancelotti had no choice but to align Varane alongside Nacho and 7 little league names. In the middle and up front as well, Real Madrid was also missing Modric and James Rodriguez.

The Colchoneros started the match by putting enormous pressure on their opponents. Weaknesses appeared all throughout the defense of Real Madrid and Nacho was particularly targeted by Atletico, who would apply intense pressure on him whenever he was in possession of the ball. This initial pressure was obviously followed by high-level cover (Arda and Coentrao, Varane and Griezmann and Kroos to next closest), which forced the Spaniard to get rid of the ball quickly. 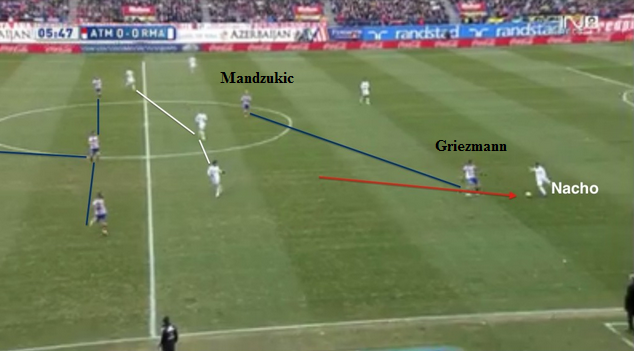 The Colchoneros very quickly put pressure on Nacho via Mandzukic and Griezmann.

What was to be a sign of the times of what was a difficult day for Real, Ronaldo and Benzema tried to win to the ball to make it available in the midfield going forward...but, they were outclassed by Tiago and Gabi, who quickly gained the upper hand in these duels. The bottom line: a Real Madrid without a vertical relay and forced to play lateral or long balls simply was no match for Atletico Madrid.

One bright spot, however, during this disastrous start to the match for Real Madrid was the availability of Isco and his technical acumen to be able take the ball down and penetrate through Atletico’s first line of defence (Griezmann-Mandzukic) and into the next 40 meters of the pitch. This, however, was just pushing the problem to a couple of dozen feet away as the Merengues were failing to follow up in support as play would enter the final third. The always important two-against-two battles when these two clubs meet had already largely turned to the advantage of the Colchoneros and any attempt to drop play back into the centre was aborted by the always effective recovering from Griezmann or Mandzukic. 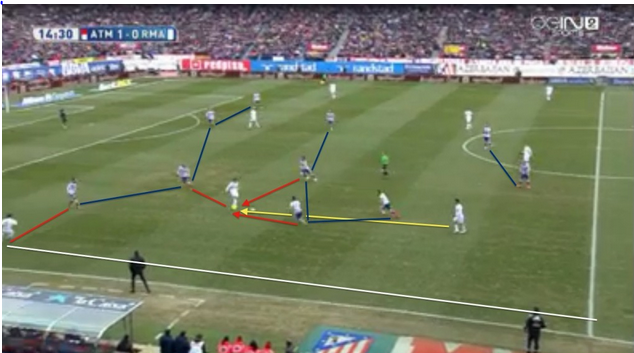 Here we see Isco slide down when asking for the ball from Kroos or Khedira. This creates a surplus from the line Griezmann and Mandzukic are holding. In this sequence, Arda is released over the Spaniard to try and compensate which leaves Coentrao alone out on the left to deal with Juanfran. In spite of the Turk, Isco still manages to find Ronaldo who is unfortunately surrounded. Miranda prevents him from dropping it and the Tiago and Gabi pair close in tightly.

Now, defense is one thing, but it is still necessary that the Colchoneros managed to recover any loose balls. In particular, those won in midfield by Tiago, Gabi and others, which allowed them to quickly generate scoring opportunities. Once they recovered a ball, Griezmann and Mandzukic would come in from width and be joined by Arda and Juanfran from the right and Koke and Siqueira from the left. 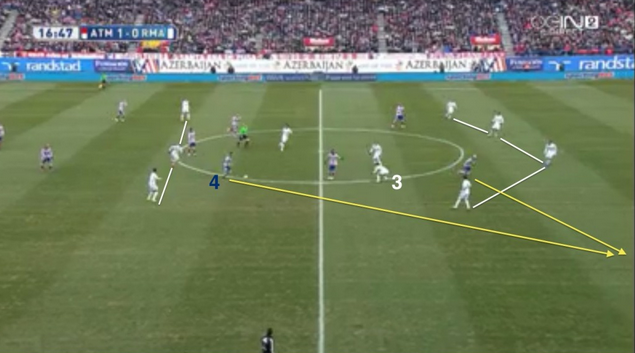 Atletico often had a numerical advantage over Real Madrid. Here, as the ball is picked-up in the center circle, Arda and Saul have squeezed inside to provide support for Gabi and Tiago as well as Griezmann and Mandzukic. 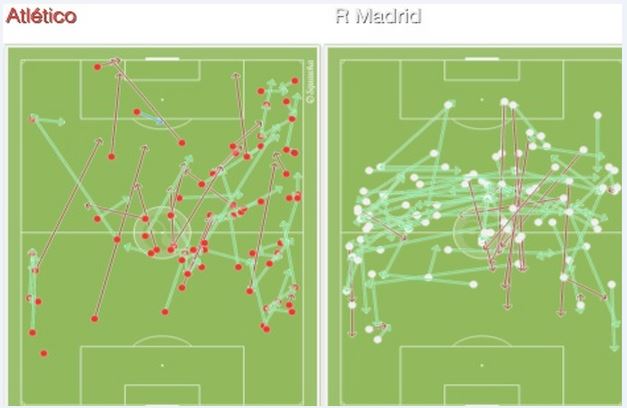 The passes made by both teams in the first 20 minutes of play perfectly illustrate the tactics employed. To the left, Atletico Madrid, who built from the midline and looked to play quickly towards the flanks. On the right we see a Real Madrid side locked in a sterile laterality, unable to build anything within 40 meters of goal.

Atletico wanted to apply high pressure on Nacho to force him to play the ball into the midfield where Griezmann and Mandzukic could hop on it. The pressing of Nacho offered attacking options and the activity of the whole team removed all verticality from the game-plan of Real, who were unable to find Ronaldo or Benzema.
Despite efforts to solve the problem, such as combinations between Ronaldo and Bale, positioning in relation to Isco etc..., Real Madrid never managed to get its head above water during the first half. 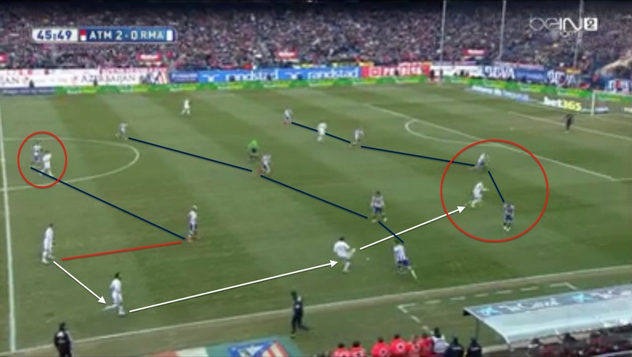 Real Madrid thought they may have found a solution in the second-half: use the flanks to find their attackers in behind. The only problem was that Atletico was already dominating these wide areas and any player Real Madrid sent in to offer support was accompanied by a Rojiblanco.

…Atletico’s overwhelming presence in the midfield and relentless pressure was How The Match Was Won!