The Champions League is always a very exciting competition, but this most recent campaign provided a few more edge of the seat moments than most other campaigns have given us. After a tournament of incredible football from some of the best clubs all over Europe, the last two were finally able to square off in Lisbon; which like almost every other match in this competition, had you on the brim of your chair from the first whistle to the last.

Real Madrid’s obsession for the coveted Champions League trophy ended with a beach celebration on the southern Pacific shores of Europe in the city of Lisbon. After the epic, eccentric, wild, crazy or whatever you choose to call it final…a final that on any other day Atletico Madrid perhaps didn’t deserve to lose…for Atletico as always, worked hard, fought till the end and made things very difficult for the opposition. Unfortunately, as the saying goes, you aren’t winners even if you are two minutes close to scripting a fairy-tale: ‘Whole is greater than the sum of its parts.’ Never-the-less, at the end of the day, the sheer determination and energy from Real made the difference, as the Galacticos 2.0 made history by reaching La Decima.

The 4-1 score line was too harsh if not cruel on Atletico, whose defence was as much a fortress as the Spanish military itself. Yet in the end, the trophy would be shipped off to Real’s portion of Madrid.

Enough of emotion, let’s get down right down to it and look at How The Match Was Won of a final which we will remember for years to come.

Real Plays Around the Middle

Real Madrid have been an excellent attacking side this season. Carlo Ancelotti’s charges have displayed some spectacular offensive showings. The speed at which they break-out and attack opponents has turned a lot of hair grey on opposing managers’ heads. However, so few seem to realize that this attacking success is built upon the back of a successful midfield. The midfield maestros’ of Alonso, Di Maria and Modric have been nothing short of phenomenal in turn of setting up opportunities for their front-runners.

Ironically, though; in the final the middies weren’t as effective as they usually are. Atletico was able to stop them. Right smack-dab in the center of the park a ferocious battle ensued; a battle that would tilt the match one way or the other.

Gabi and Tiago were fighting above their weight-class and with the assistance of fellow heavyweights; Garcia and Koke, they made sure that Real had to play the ball around or over the midfield from wide or deep areas, rather than through the middle.

Here we see an example of Atletico Madrid clogging the middle and cutting off options in the heart of the pitch, thus forcing Real Madrid to play down the right flank: 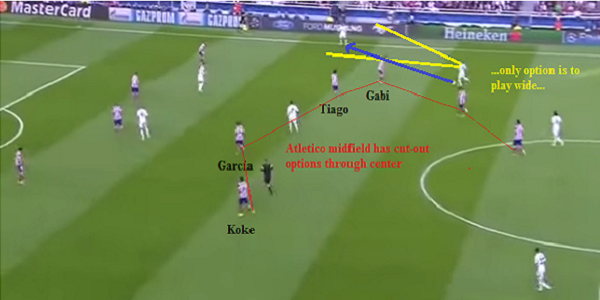 …and here is an example of Atletico forcing Madrid to try and bypass the midfield from a deeper position through the air: 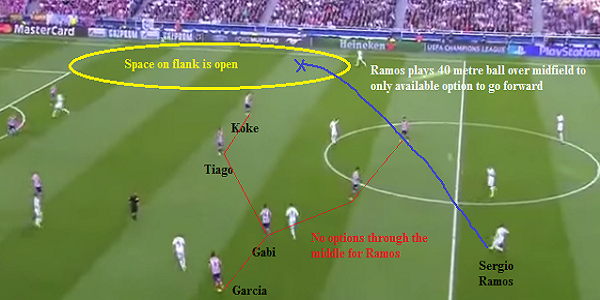 Their tenacity and fighting spirit forced Ancelotti’s Real Madrid into a different way of achieving the same end; a side whose primary means of creating scoring chances almost always came from midfield.

On this night however, it was simply a 2v2 match in the middle of the park. Gabi and Tiago stepping up and preventing Modric from shuttling past them as he has done so often in the past.

In this next image, we see Gabi pressing Modric while Tiago begins to double-down from Modric’s front giving the Real playmaker no options: 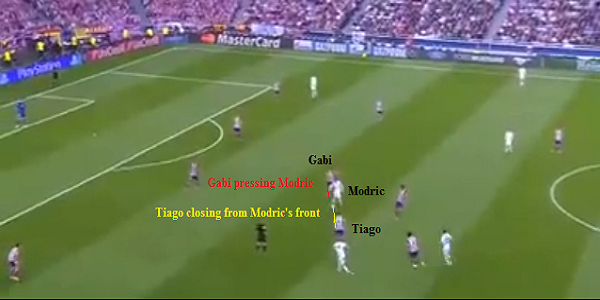 Khedira was there as well; there to ensure defensive solidity. While he put in a very good shift of cutting out the Atletico attacks, he was never able to contribute much going forward.

Notice how deep Khedira is in this next image, especially as a center of the park player: 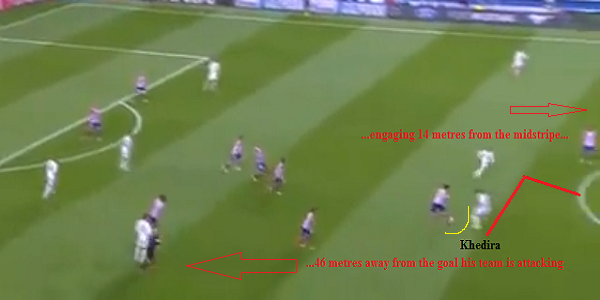 This was where the puzzle piece that is named, Xabi Alonso, was so very missed by Carlo’s side. The Spaniard can sit deep in that pocket and distribute quite well from range. With the likes of Bale and Ronaldo to help aerially up front, Real could have continued to play through the middle by going over the top, but we must give Atletico full credit for making it extremely hard to do even that.

The Colchoneros midfielders had to make sure that Real were not able to play the ball behind them, as the double-edged sword of Bale and Ronaldo getting ahold of the ball could be disastrous for any defence on any club anywhere in the world.

Atletico’s aggression of which they tasked themselves upon Real was rather impressive. Their four midfielders; Gabi, Garcia, Koke and Tiago just did not allow Real to establish the foundation for any dangerous offensive attacks.

So, because their normal path of operation through the middle was closed to traffic, Real had to take a detour by playing through the wide areas.

It was this stranglehold in the center of the pitch by Atletico that forced Real to activate their backs. Carvajal and Coentrao; respectively, saw an awful lot of the ball. Being that the midfield stayed quite a bit narrow, the backs had to shoulder a large brunt of Real’s attacking responsibility, as the space was available for their picking. 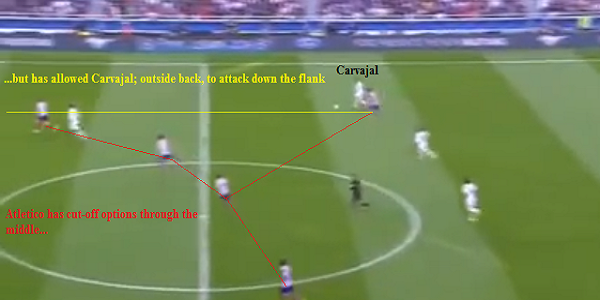 With this newfound space on the flanks, Angel Di Maria was also forced wide and he was the one player that made the biggest impact for Real Madrid. The Argentine was a threat the entire match. What he did with the ball at his feet devastated Atletico. It was this brilliant technical flair that was directly responsible for the crucial second goal finished off by Bale, as Di Maria dribbled past defenders almost as if they were corner flags to get off a quality look and strike on frame to create the chance.

Di Maria breaking four Atletico defenders as he turns inside from the left flank before setting up the go-ahead goal: 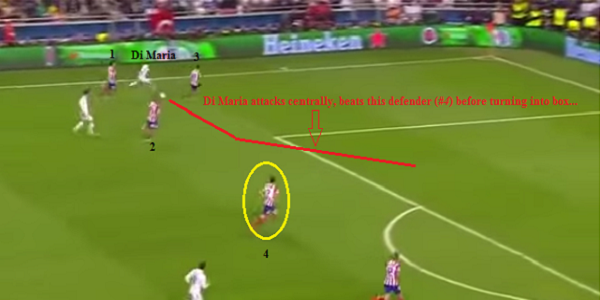 Oh Marcelo; how we love you so…

As previously discussed; the available space was on the flanks, as Atletico wanted to remain narrow and stop Real from attacking down the middle. Being that most of the open space was out wide, the onus to attack fell on the defenders, but they were unable to make enough of an attacking impression in the first stanza. Coentrao was tuned-in on his defensive duties, feeling confident in doing so because he had Di Maria and Ronaldo in front of him.

However, Ancelotti saw this and made halftime adjustments with substitutions. Izco came on for Coentrao and Marcelo was brought on for Khedira. These two personnel movements brought a whole new attacking mindset to the fore-front.

Izco positioned himself in the middle of the park, but locked-in at a more advanced position than Khedira. He was brought on to try and get behind the Atletico midfield and when successful, play balls through any seams that appear in the Atletico back-line. Ancelotti was expecting these gaps to appear because Atletico would be forced to shift their defensive emphasis to wide areas in order to successfully defend Real’s attack. With Marcelo on the pitch, Real was able to rotate themselves and be able to play with just three across the back, as Marcelo continuously pushed very high up the field.

Here we can see Marcelo releasing from his left-back position with plenty of open pitch to attack: 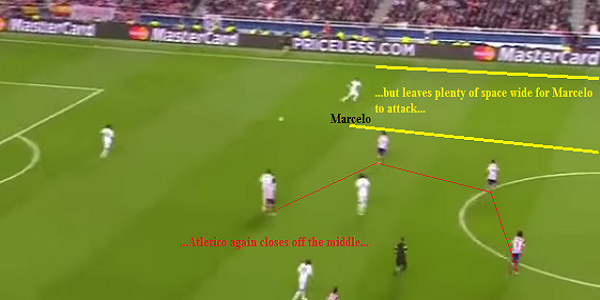 …then we can see Marcelo interchange down that same left flank via an overlap: 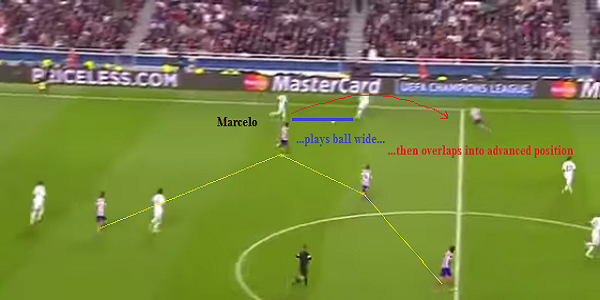 This was nothing short of a brilliant tactical read of the match by Ancelotti and his team. The ability to recognise Coentrao’s inability to create enough for Benzema and Ronaldo is something all football coaches should aspire to have; as the ensuing move it led to was a masterstroke! Real Madrid suddenly had found that spark about them down the left flank. Marcelo began wreaking all sorts of chaos and served as the catalyst for...How The Match Was Won!