In the last analysis I made which was on Algeria’s solid defensive system, I looked at how they made Germany predictable, and how they almost defended in a 6-3-1 formation, playing on the counter attack behind Germany’s high line.

In this, I will look at the slight tactical alteration Jogi Loew made in regards to the runs that Germany looked for, and how it won them the game in Extra Time.

Highlighted areas and runs to exploit the spaces

When Germany had the ball in deep or wide positions, there were 2 main areas that were available on both sides (due to the symmetrical nature of the Algeria defensive block shape) which were;

For the blindside runs from deep to work, the wide attacker on the far side had to tuck in enough to take the attention of the full back, while staying wide enough to leave the space open.

Similarly, if a player was far forward enough to hold the attention of the far side CB, it had to be in a position to open up space for Muller’s 2nd run from wide-> centre -> behind defence while also leaving the space for the far side run to be open.

Identifying where the space is when it is so small is a difficult thing to do, for the players to have the intelligence to make sure the game process allows the players to exploit the spaces within an organised defence is incredibly difficult.

For Germany, I would say that with Pep Guardiola being the new coach and his ideology of making space and using it effectively being a big part of Bayern Munich’s system, this has undoubtedly helped players like Kroos, Schweinsteiger, Lahm, Muller and Neuer (with regards to playing a high line) has helped them to become better players when being able to break down a tight defence like Algeria.

Full Back presses but CB’s don’t drop together, Germany exploit the space 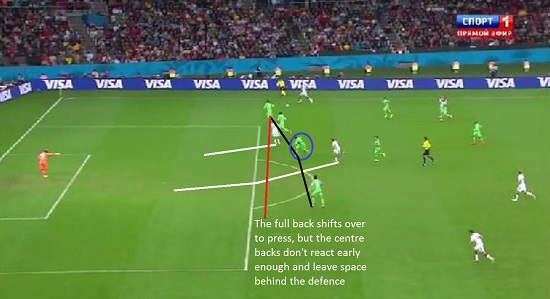 In this chance, Germany have identified that they need to get into the space between the far side full back and far side centre back. As the ball is passed wide, the CB’s are higher than the pressing full back, giving the runners space to get behind the CB’s before the ball is crossed. 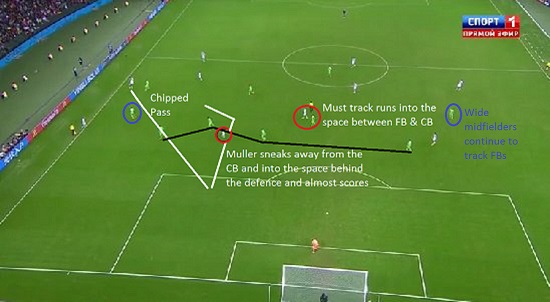 As the full backs of Algeria are reluctant to move away from the centre backs and leave space, the wingers have to protect wide areas in deep positions, meaning that Algeria often overload the wide zone 3v2 and force Germany back where they have a pressing trigger to win possession or move the defensive block forward.

With this information, Muller has drifted inside from his right wing starting position into an area where nobody is sure who should mark him. The CB steps out expecting a ball to feet. As this happens, Muller drifts to the blindside and sprints into the space behind the centre back, and between the defenders, offering a chipped pass where he nearly scores from.

I think in this situation, the near side CM of Algeria must be closer to the side of the ball and track Muller as he drifts into that zone. As he is not close enough, he doesn’t take responsibility for his run. 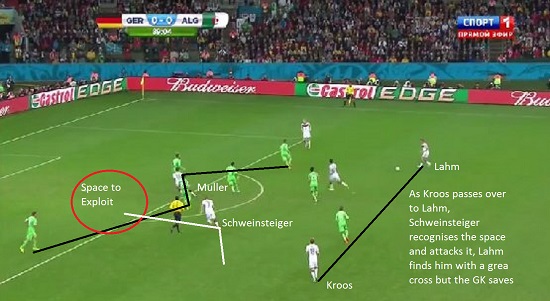 As the ball is transferred across the field, Schweinsteiger drifts between the lines. As the ball is en route to Lahm, he scans for Muller and space – he see’s Muller has attracted both CB’s and can then make a 2nd run which will be unmarked into the space between full back and centre back, with Lahm in a position to cross that he finds himself in regularly for both Germany and Bayern Munich. 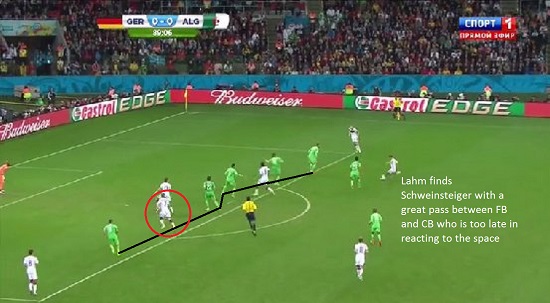 The key to this is the timing and ‘type’ of run Schweinsteiger makes – a jog into the gap between the lines as the ball is played to Lahm, then the sprint which is made after eye contact is made with Lahm as he looks up and knows where the space would be – between CB and FB on the far side.

Schurrle’s winning goal between FB and CB from blindside 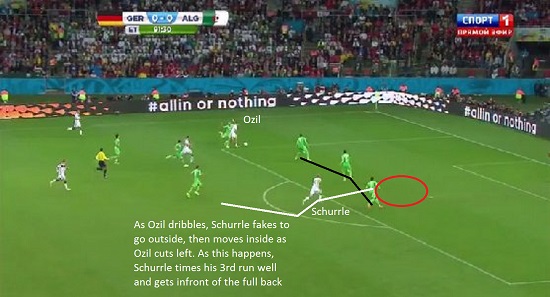 In the first minutes of Extra Time, the tactical information that Jogi Loew had given to his players had been used to create chances, but not goals. Algeria didn’t react to the runs Germany were making and were caught out several times. It was no surprise when the goal was scored from a run into the same space that was targeted in the 2nd half. 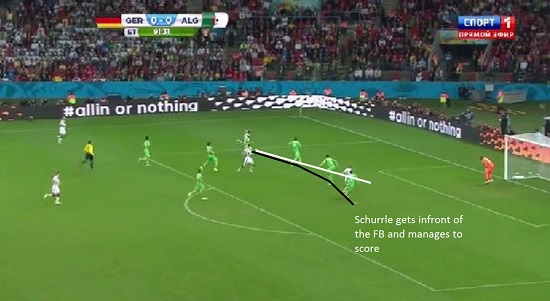 As Muller shifts the ball to his left, he knows he will put it across goal, all Schurrle has to do is arrive unmarked and on time. As he is now goal side of the full back with the far side CB 1m too high, the space is available (possibly because of the cutback option) and Schurrle scores.