It was on the last day of the group phase when one of the most exciting groups; Group G, was drawing to an exciting close. Each of the four teams in the group were all within in a shot of advancing through to the next round. So, there was obviously a lot of tension in the air as the build up to this match rolled on in which only a draw would be enough to take both sides through. This was also supposed to be a very tough match as the two sides were looked at as being quite evenly matched going in. Coach Jogi Low, who was an assistant to Jürgen Klinsmann during the latter’s time in charge of Germany, would be facing his former colleague as head-up; just to add some more spice to the occasion.

Here's what I thought were the key tactical pieces that led Germany to this win over the USA. What are your thoughts? Please let me know what you think and what other tactics you think were a factor in this match in the comments section below.

United States’ Outside Backs Get Taken Behind the “Proverbial” Woodshed

In their first 2 group games, Germany unveiled a slightly different system where they played without the use of a traditional central striker and instead, used a False 9. Generally, it was Muller who took up this responsibility. Their traditional 4-2-3-1 had been discarded for the 4-3-3 to add extra protection in midfield as a sort of shield against sides who liked to counter. Philipp Lahm, the additional man in the middle of the park, served as a holding midfielder and sat-back to protect the defence. Germany’s outside-backs were actually centre backs and never really got forward to support the attack. This worked out quite well in their first match against Portugal. However, in their second group match against Ghana, Germany struggled as Ghana sat deep and tried to play on the break using their speed out wide to target these very same German outside backs. This actually worked out well for Ghana and it also exposed a potential weakness for Germany.

Because of the lack of width they showed in their previous match against Ghana, Klinsmann probably expected Germany to keep their attacks focused through the middle of the park. However, that wasn’t what Germany did and Klinsmann was ultimately out coached by his former apprentice as Germany would very seldom come up the gut; primarily because the USA left the wings wide open. The early pressure from the USA came in the middle of the pitch. Their midfielders got quite close to each other trying to cut out any vertical passes the German midfield might try and play through them.

In doing this, Germany was left with a tremendous amount of room down the touchlines. 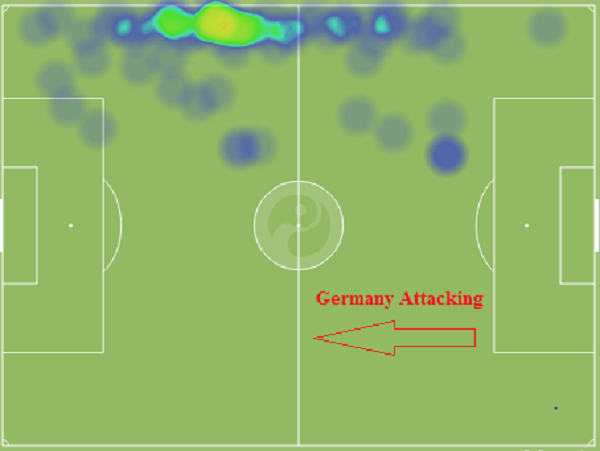 Boateng heat map. He spends more time in the opposition half

So, in response to the United States’ overloading the middle, Low encouraged his outside backs to get forward and support the midfield from width. Boateng and Howedes spent a lot of time in the opposition’s half very early in the match. Germany connected a number of horizontal passes moving the ball from side to side which would eventually both create space and open-up seams for player to run into and serve as targets for these outside backs to find on service. Most of the time it was Jerome Boateng who got in behind to cross the ball. 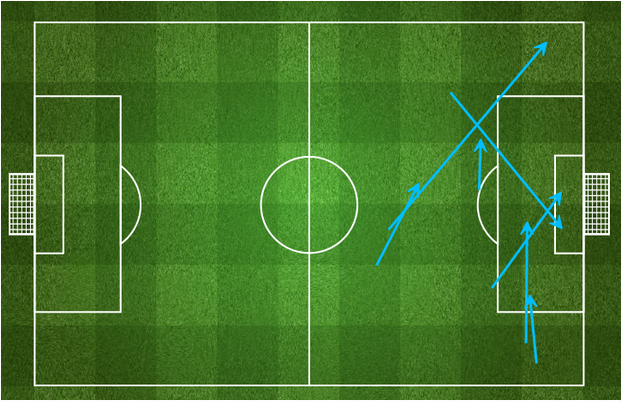 As you can see from the previous graphic, most of the opportunities that Germany generated from open play originated somehow from a wide area.

Because the United States were having extreme difficulty holding onto the ball and creating anything due to the added pressure of the German outside backs getting forward and into the fray, Klinsmann responded by not allowing his outside players to push forward as much when the USA were on the ball. When the Germans had the ball and were able to hold it, the two USA outside midfielders; Davis and Zusi, didn’t have to worry about recovering and were already in position to stay locked into the block of 8. 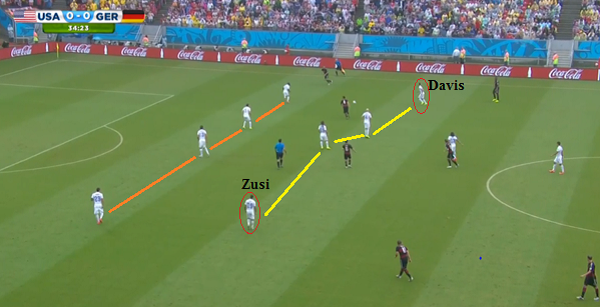 What this established was some protection for the USA outside backs as well as a few more numbers defending their box and marking their zones more carefully. This resulted in a reduction of Germany’s effectiveness when sending attackers into the box. Unfortunately for the USA, this also made it easier for Germany to maintain possession when they had the ball.

In this next image, notice the positioning of Germany’s back four and how far advanced they are.

Lahm Comes Bursting Forward At Will

Another essential part of the midfield battle was executed almost singlehandedly by the exceptional Philipp Lahm. Selected to play as a holding midfielder, the Captain put in a good shift supporting the attacks. On a normal day, his job would be to screen the back four and allow the likes of Kroos and company to get forward and link up with the front three. However, with the USA playing so close together, it became a bit difficult for the likes of Kroos and Schweinsteiger to dominate proceedings. Those two in particular were forced all over the pitch and received a lot of rough treatment for their efforts. This is where Lahm came into the picture. The Bayern player’s vertical movement made him hard to pick up for the USA team and he was able to get in between their block and slice passes trying to scramble them. The USA did well to retain their shape, but Lahm did even better as a passing hub.

Throughout the Group Stage, the USA did just enough to make it through a very difficult group and fans will be in love with a certain John Brooks for a certain crucial late goal for quite a while. Unfortunately, what this match showed is how far away the USA is from really competing with the elite nations the world over and how they will need to add some more attacking verve to their line up if they are ever able to really trouble the Germans.

Germany, on-the-other-hand, put in a domineering performance that saw them win the group with ease in the end. The team, like so many tournaments in the recent past, looked strong going into the knockout rounds. They just needed to ensure they got their tactics correct in the upcoming battles to finally lift some silverware.

…but, on this day it was their work on the flanks and the talent of Phillip Lahm that was How The Match Was Won!

Give Credit To Germany