Bayern Munich are right now arguably the best team in Europe, and although they regularly enjoy over 60% possession in matches, they need to ensure that they don’t leave the back door open and conceded goals in the minimal amount of attacks that the opposition will have. In a recent Champions League match v Arsenal, Arsenal have a few noteworthy attacks, but many were cut off at source or stopped by very clever positional play and quick pressing once everyone was in position to do so. 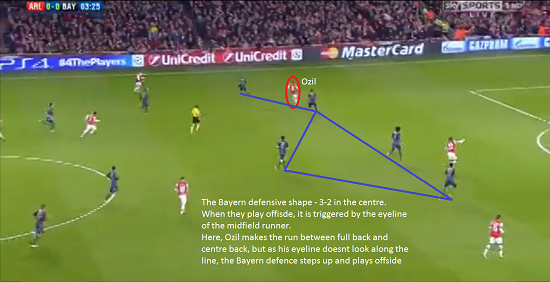 Arsenal are attacking down the left side, and Mesut Ozil makes the centre-wide run behind the full back. Bayern Munich have a very straight back 3, playing Sanogo offside. Bayern have a trigger where that if the player makes the run that Ozil has made, the back 3 will step out. The trigger is the eyeline of the player making the run, he can’t see the defensive line so can’t hold the run. 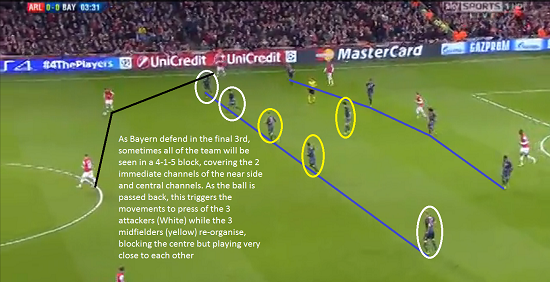 As Arsenal force play towards the Bayern goal, Bayern drop off into a shape with no front pressing striker. They block the side of the ball and as Arsenal only have 1 passing option forward, they have to pass back and re-start. This triggers the high press from Bayern Munich, which forces Arsenal back and allows Munich to get higher up the field and into positions where they are happy in. 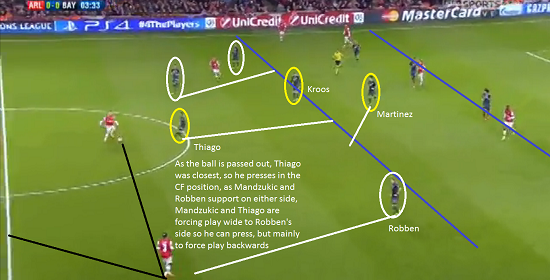 As the ball is passed to Wilshere, Thiago becomes the CF and presses high, not forcing play either way. Martinez covers the space behind Thiago which blocks the pass into Sanogo at CF. Mandzukic is high on the right, blocking the forward pass, leaving Sagna free on the other side, where Robben is ready to press and force play back, reshaping into the 4-3-3 formation. 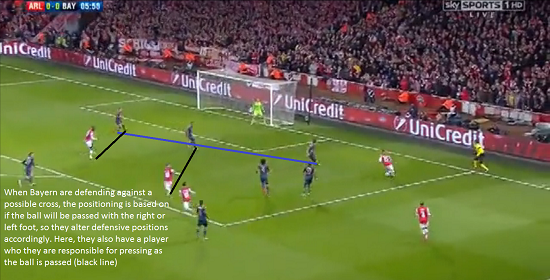 When Bayern defend, they defend properly – they get into positions which defend the goal, but also close to opponents who could receive, taking responsibility for a player inside the box. Some teams when in this position defend across the 6 yard line, where the far side defender wouldn’t be able to defend a cutback. Bayern make a diagonal line which covers the passing line possible, giving the GK responsibility for dealing with any high balls into the 6 yard box.

Bayern overloading on the sides 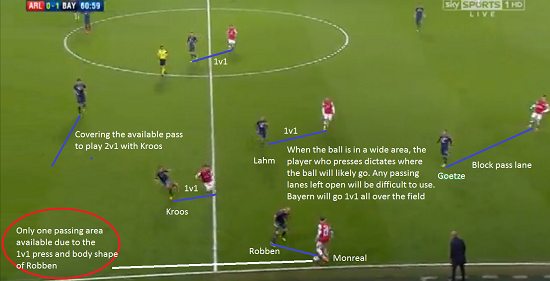 One of the main reasons Bayern are successful defending under Guardiola, is that they play a positional possession game, and they always have one eye on defensive transitions. When possession is lost, they invariably have enough players around the ball to win it back.

In this example, Bayern are 1v1 all over the field, with Goetze spare but blocking the passing lane back to Koscielny. Robben is in good defensive position, and there is only on possibly passing angle – down the line into a position where Kroos is already ahead of his opponent with Martinez covering.