For many coaches, speed is considered to be one of the most important predictor’s of soccer performance. Indeed, one of the first things that come to mind when doing tryouts is speed assessment.

In today’s activity, we are focusing on developing starting speed and acceleration. These components of speed are especially important for wingers and strikers who are trying to get the better of their man in a 1 v 1 situation; or for midfielders trying to evade their mark in midfield so they can receive a ball to feet and face forward.

For today’s activity, divide your players into groups of two and give each pair a ball. For each group, instruct the players to stand 7 to 10 yards apart facing each other. Place two small pylons (1 yard apart) midway between the players as shown in Figure 1 below. In addition, place two small cones to the side of each player: one 7.5 yards away while the second should be placed at 15 yards.

Instruct the two players (in each pair) to pass back and forth between each other using one or two touches. However, every pass must go through the gate created by the two pylons (Figure 1).

On the coach’s signal, both players should turn and sprint to the desired cone. In Figure 2 below, they are sprinting towards the cones that are 15 yards away. The coach should tell the players beforehand what the signals will be, and which means what.

When they reach the specified cone, they should decelerate, turn around, and then jog back to their initial positions. As soon as they return to their starting positions, have them continue to pass back and forth until the coach signals for them to sprint again.

Continue this process until the players have completed 5 sprints (1 set). However, ensure they rest at least 20 to 30 seconds between each repetition. Do a total of 3 sets (15 repetitions total), but rest for 2 to 3 minutes between each set.

Note: Ensure you switch the starting positions of the two players every so often so that they accelerate towards both their left and right sides.

You should vary the exercise after each set. Consider the following two variations when planning your activity:

For the first variation, instead of having the two players pass through the two pylons; have them pass on the outside. However, each subsequent pass must be on the opposite side. So, as shown in figure 3 below, player-1 passes to player-2 and the ball travels on the side closest to the cones used to mark the sprinting distances. Player-2 then takes their first touch to their left and passes back to player-1. This time however, the ball travels on the opposite side of the two pylons (Figure 4).

As before, have the players sprint to the required cone as soon as the coach signals.

Justin Cresser – Has coached soccer at various levels both in North America and abroad (Hong Kong and Africa). His most recent position was as the Assistant Technical Director at the Soccer Club of Toronto. He has his National Diploma from the NSCAA and is also a certified strength and conditioning coach.

You can see more of Justin's soccer specific conditioning drills and exercises with a ball in his two book set, Total Soccer Conditioning: A Ball Orientated Approach. 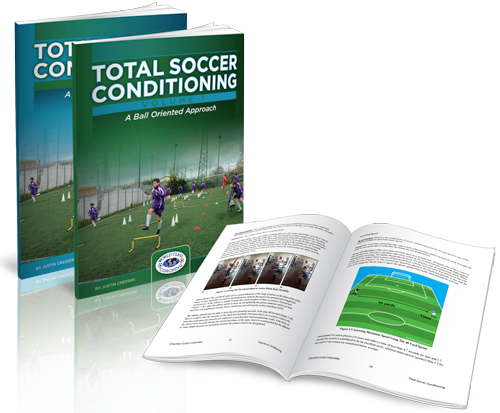