New Manchester United Manager Louis Van Gaal has taken over a struggling side from last season, but despite the criticism that David Moyes endured, Louis Van Gaal's premier league start had delivered 1 point from 2 winnable games. This was followed up by a 4-0 humiliation from MK Dons. Despite fielding largely a reserve side, it did contain experienced first team and internationalists in Javier Hernandez, Danny Welbeck, Shinji Kagawa, Jonny Evans and David De Gea.
In the 3-1-4-2 attacking system, there are space to exploit in transition, or when the midfield press high. When the ball is played wide into the full backs, this may entice the already high positioned wing-backs to press high and leave a large space between the DM and outside CB, and these spaces were the ones that punished Manchester United, from 2nd balls and off the ball runs from deep.

Spaces highlighted that can be used to exploit the positioning of a 3-1-4-2 if the opponent presses high.

If the wing-backs return into a defensive line of 5, then the space spaces exist while there should be more space in central midfield as the wide central midfielders should drop deeper to help make a bank of 5-3 infront of the defence, closing off the key zones highlighted.

Problems with the high pressure against good circulation 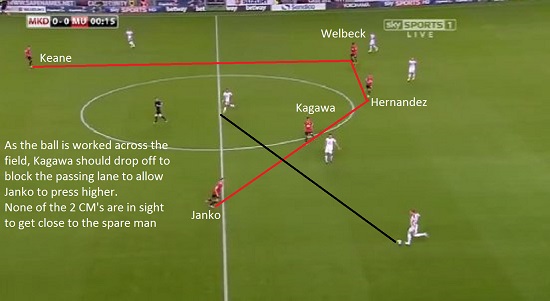 Here, MK Dons simply pass the ball quickly across the defensive line, spreading Manchester United open. Shinji Kagawa needs to block the passing lane by playing further away from the man he is marking, who won’t get the ball as the angle is not correct with pressure from behind. There are no central midfielders high enough and as a result, 4 players are taken out of the game with one pass.

Targeting the weak zone and overloading the side 3v2 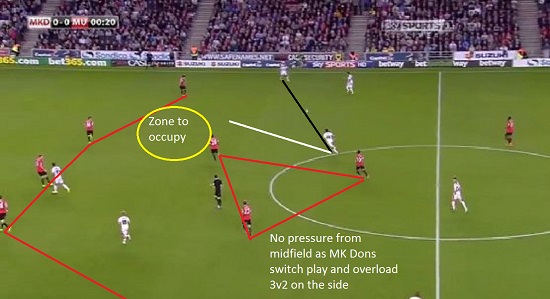 The ball is easily transferred one way then diagonally across, opening up space on the far side and allowing the 3v2 overload and occupation of the weak zone (yellow circle). No pressure on the ball from either central midfielder. 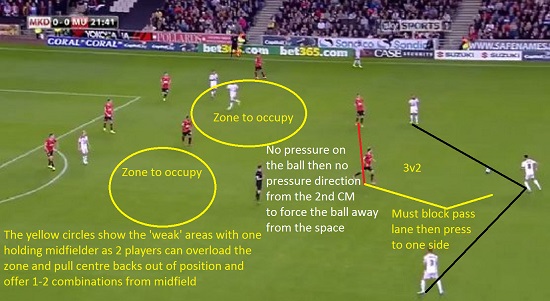 As MK Dons re-circulate the ball, they create a 3v2 in the centre, which Man United don’t deal with as nobody forces play back the way it came from. The front 4 occupy key zones and look for a way past the DM who can’t influence the play from such a deep position. 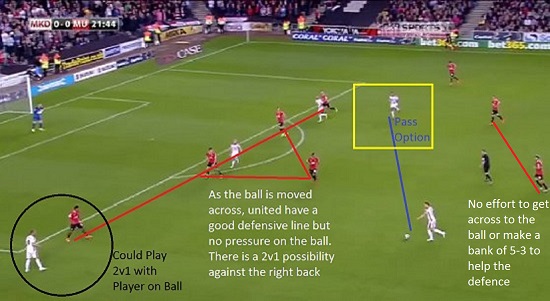 From the 3v2, MK Dons have worked the ball into the full back who was positioned centrally, who can pass wide and play 2v1 on the side, or behind the full back as he has his stance forward which may restrict him from reacting and accelerating to block or cover a pass behind him. There is a pass option inside which would open up the 2 attackers on the defensive line, but he shoots.

Struggling to deal with 2nd balls from high diagonal passes 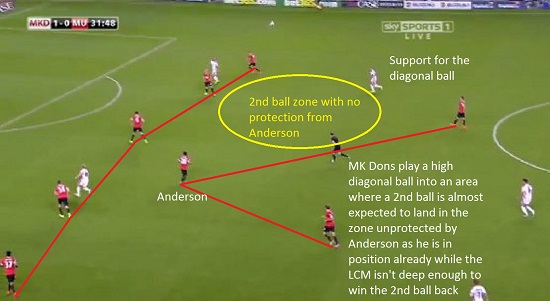 As highlighted, there is a weak area in a 5-1-2-2 (5-3-2) formation as if the lateral central midfielders don’t get close enough to the zone highlighted, it can be exposed with runs from various areas, and is particularly weak when defending against 2nd balls when the zone is occupied.

The back 5 are unorganised with combinations in the attack 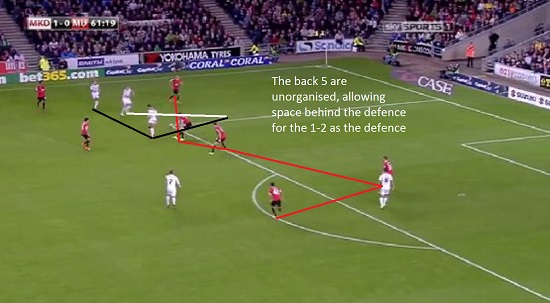 From a throw in, the full back starts behind the defensive line, but as the defence push out, the right back and left centre back don’t, while the near side and central defender both push forward, leaving space behind them for the 1-2 that MK Dons will play. 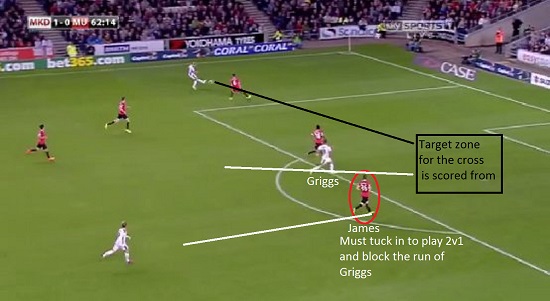 As United are exposed on the counter attack with the wing back high, the near side centre back is still recovering, so the central defender is dragged across to defend 1v1, leaving the far side CB to track the runner, who loses him by drifting wide while the far side full back doesn’t tuck in. 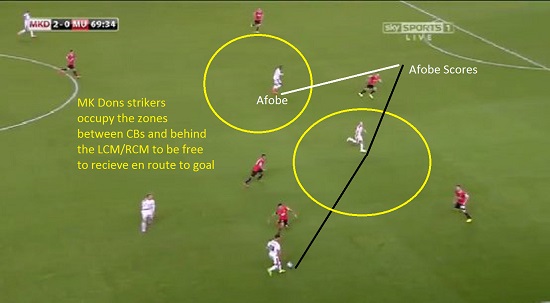 Again on the counter attack, MK Dons break quickly from winning possession, and look to get the ball forward quickly. As the attackers are in the yellow circled area highlighted previously, they both have space to receive and can play at angles to pass through the defence. 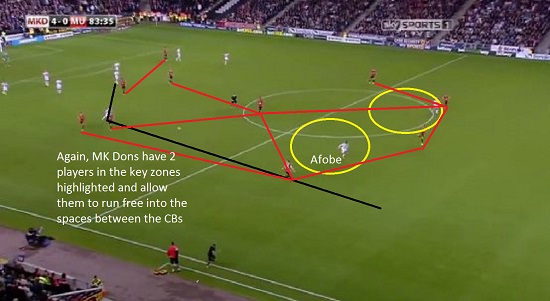 Again, MK Dons win possession and within 2 passes are behind the back 5 and DM of Manchester United. As the ball is played around the outside of the outside centre back, Afobe races onto the ball and is quite lucky to stumble through challenges to score.

During the whole match, MK Dons looked to stretch Manchester United across the front to stop the press from being successful, and gaining control of the key zones that would give them a way of playing through the defence on a regular basis.