Since I was young, I have always had an interest in tactics, specifically successful coaches, or coaches who have seemingly come from nowhere. When Jose Mourinho’s FC Porto won the UEFA Cup in 2003 against Celtic, I enjoyed the direct style of play much more than I enjoyed watching Celtic’s direct style of play, mainly because it had some unpredictability, fluidity of movement and the talents of Deco as a number 10 in a midfield diamond.

Costinha’s role was an interesting one; a common thing in all of Mourinho’s teams has been the utilisation of a defensive midfielder who sticks to his position and protects the defence – Costinha, Claude Makelele, Esteban Cambiasso, Thiago Motta, Xabi Alonso, Nemanja Matic – but for me it was interesting because it was a ‘new’ position as I had grown up in Scotland with a 4-4-2 and no set defensive or attacking midfielder, and certainly not within a diamond midfield which is common in Switzerland and Italy.

Mourinho’s Porto were a strong defensive team with pace and efficiency in attack, with a good supporting cast in midfield in the form of Thiago, Nuno Maniche and super-sub Dmitri Alenichev.

Wide area turnover; Porto drop off and form a flat back 4 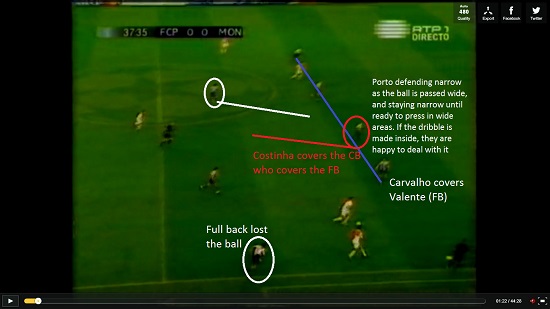 As the ball is lost on the side instantly the back 4 drop off and get into a clear line, with Costinha filling in the space that Carvalho leaves to cover Valente the FB who lost the ball.

With only 1 player on the defensive line, they know they can force him to delay his run, while they get into a clear 4-1 defensive shape. Costinha will fill in the space between the centre backs to reform the back 4 and allow the centre back who is covering the full back who lost the ball to track back and play 2v2 on the side with the centre back who has cover in the form of Costinha.

The key to this is the timing of the pressure on the side – they know that the main danger will come from speed into the space, so delaying the attack is the priority then making the play 2v2 on the side. 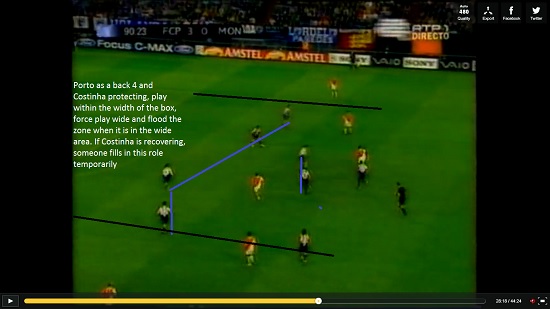 Here, we can see the narrowness of the Porto back 4, with an arced back line as the central defender has spotted the danger of a chipped pass over the defence behind the full back could allow the attacker a head start in the race to goal.

The 2 central midfielders protect the back 4 and block the forward pass, while the pressing player ‘directs’ the play to one side. The biggest problem here is that a high pass can eliminate the 2 defenders, but the body shape of the left side centre back is interesting because he can block any passes that are made on the floor, or come out to press if a short pass is made.

This set up here is the problem with having a high line, if there is no pressure on the ball, having the back 4 so close to the ball with space behind can be exploited if the correct pass is found. For me, I would ask that my full back drops off with the right side centre back and avoid playing offside as I think that is what the intention is here, if the right centre back steps up. 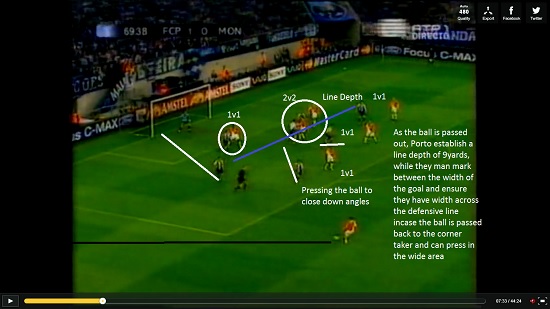 As Monaco play the corner to the edge of the box, instantly the man comes off the post and to close down the space. We can see with the blue line that Porto have now established a line depth and can possibly force an attacker to be offside when the cross is made if they can keep pushing out. 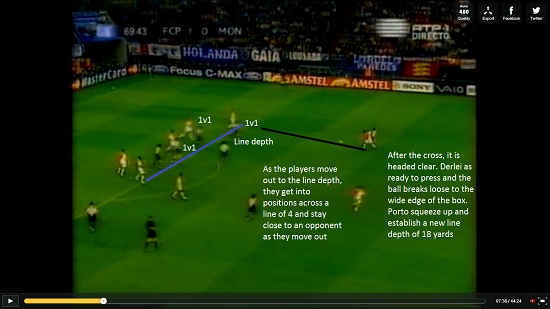 As the ball is headed clear, Derlei presses the loose ball. Porto continue to come out as a unit, in one straight line of the back 4 with 2 infront, but also the back 4 have the discipline to come out close to an opponent so that if they receive, they can instantly close them down and reduce their time on the ball close to goal.

Dealing with the next phase of the attack 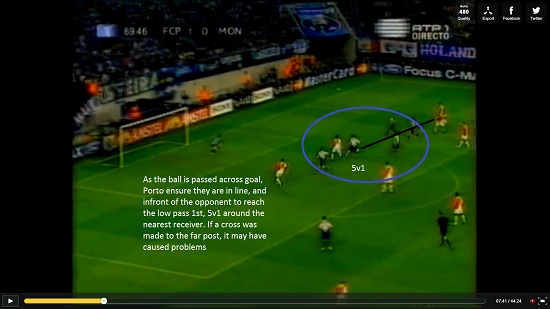 As Derlei doesn’t win possession, Monaco continue to attack. As the ball is wide, they look to make a pass across goal, but Porto have everyone on the same half of the field, and can easily get players infront of the attacker. Vitor Baia (GK) takes an interesting position – he looks ready come out and claim the dangerous cross to the far post which is the only area that Porto don’t have covered.

Dealing with attacks in wide areas when organised 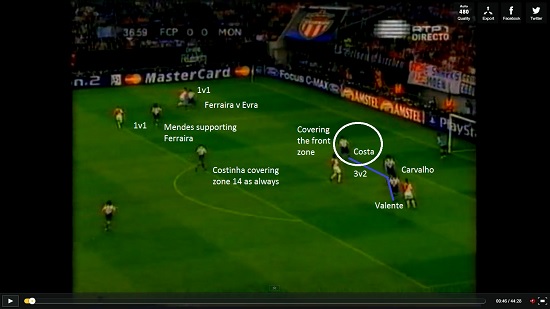 Porto don’t over commit to wide areas, they play with equality or a 1 man overload if a player is a dangerous dribbler. Ferraira and Mendes are responsible for a man each on the side while Costinha is in a covering position for both Mendes and the possible cutback. Costa, Carvalho and Valente protect the goal 3v2 and cover the 3 key zones – front zone, centre 6 yards and back zone.

We can see from this image, the positioning that Mourinho wants from his defence and Costinha.

Overloading the wide zone and man-marking inside the box 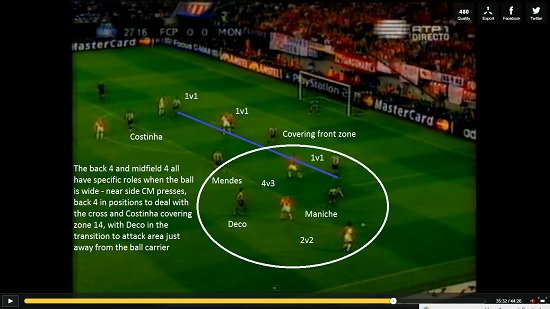 As Monaco advance down the right, Porto want to stop the ball from entering the box; Maniche closes down the ball quickly as this is an area where a good cross could be made from, while Deco will mark the supporting team mate but become the 1st player in transition to lead the attack. Mendes is between the LB (Valente) and Deco incase either needs support as the ball is moved.

Inside the box, Porto have established a line 5m from the ball, high enough to force a difficult header from 12m, but deep enough to cover and curved crosses that may go between the defence and goalkeeper.

Each defender has a role – cover your zone and mark the attacker, only Carvalho is spare, covering the front zone. Costinha is responsible for 2 roles – marking his runner and collecting any loose balls on the edge of the box.

Dealing with penetration on the side 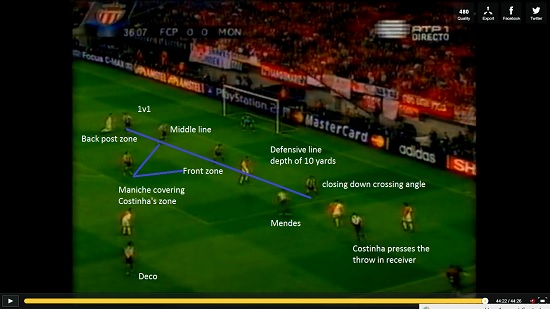 If the player on the side can’t win the ball or force play back, Porto still ensure that the opponent in the scoring position in the box is marked while the 1st defender closes down crossing angles. As Costinha is the player who was dribbled past, Maniche covers his position at the edge of the box between the central defenders.

Mourinho’s Porto was a well drilled machine, efficient in attack and solid in defence, as we can see from these images, even if they did get into difficult positions, they were organised well enough to deal with the threat of the opposition and adjust to defend the attack.