Despite the criticism of Luis Enrique this season, he has made an improvement on the work by Tata Martino last season, by re-introducing a pressing game and adding an aggressive offside trap, while finding a way to play the front 3 of Luis Suarez, Lionel Messi and Neymar. Earlier in the season, Luis Suarez and Messi failed to connect with enough regularity so Enrique had to find a solution; change Messi from being the false 9 and instead play Messi in a right sided free role with Suarez central.

Obviously, having Messi on the side and not in the centre would make him less effective, so to allow him to drift inside and have Suarez occupy several defenders, there has been a newly formed right sided triangle created with the occupation of the wide zone rotating between Messi and Rakitic, with Alves playing slightly deeper due to his declining physical prowess.

Normally, we will see Ivan Rakitic as the right sided central midfielder, with Messi as a right forward. Often, we will see Rakitic drift into the right forward position as Messi moves central. If Rakitic is unable to fill Messi’s zone, Alves may move forward and stretch the back 4 wide, or be completely free on the far side which leaves the opposition vulnerable to the switch to the right.

Messi, Rakitic and Alves on the right side occupying all of the zones 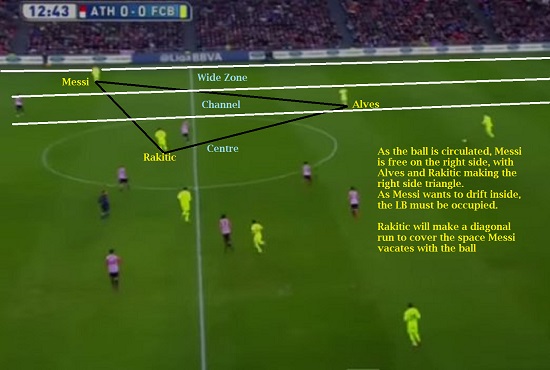 As the ball is circulated from left to right, Messi starts off on the far side, with Rakitic right centre and Alves deeper at right back, in the channel. As the ball reaches Messi, Rakitic will fill in his space. 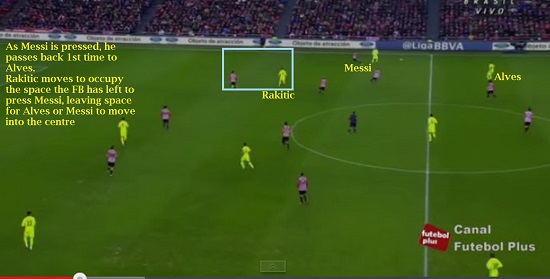 As Messi is pressed, Rakitic draws the centre back over as he drifts into the space Messi will leave. As Alves stays narrow, there is a good passing angle in and out of the wide zone to attack diagonally. 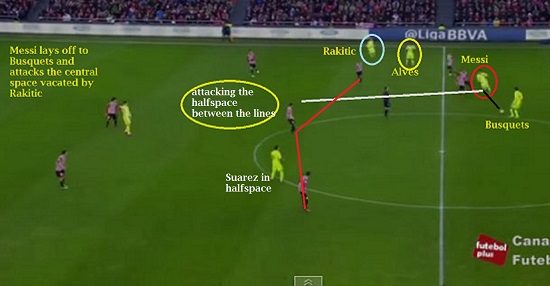 As Messi moves to take the 1-2 back from Alves, has has Busquets to use as security to release the ball to and attack the halfspace between the lines, with Rakitic now the right winger in a 4-2-3-1.

This time, as Barcelona counter-press to regain the ball, Rakitic spots Messi in a midfield position and looks to fill in his space on the right side, with Suarez and Neymar 2v2, creating a 3v2.

We can see Barcelona in an organised shape, looking to disrupt Bilbao as quickly as possible as a switch of play may be difficult. Rakitic is on the right midfield position with Messi as the right forward, while both are man-marked, potentially drawing a space (blue square) for a diagonal run from Suarez into the space created by Messi and Rakitic being marked by the LB and LCB.

Here, Messi, Alves and Rakitic have all changed zones – Messi at RB, Alves RCM and Rakitic RF. As Alves and Messi exchange passes, this delays the attack and gives Rakitic time to attack the space behind the LCB who isn’t sure if he should close down Alves or drop deep to cover the LB.

Messi at RCM in organised possession 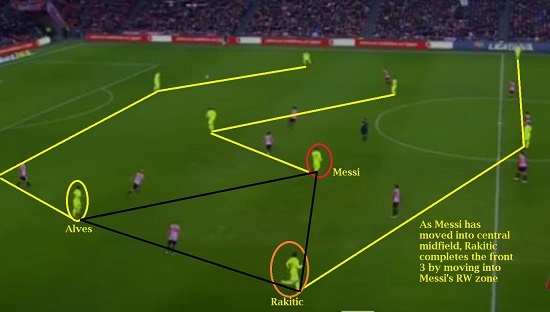 From this image, we can see that Rakitic has again drifted wide as Messi moves into the RCM position as the ball is being circulated. The LB half goes with Messi but stops, aware of Rakitic’s run into the position Messi occupied. None of the midfielders seem aware that Messi will drift between the lines into his most dangerous area as they move forward to press and cover spaces higher up.

Alves in the RF position as Rakitic and Messi play deep

This time, Messi moves deep as Rakitic plays closer to the back 4 to bring the ball forward safely. To ensure that Barcelona can open up Bilbao with the switch of play, Alves will quickly move into the right forward zone that Messi has vacated, as the LB wants to go with Messi but is very aware that Alves will offer a pass into the space behind him if the switch is on, with Messi in a dangerous supporting position. 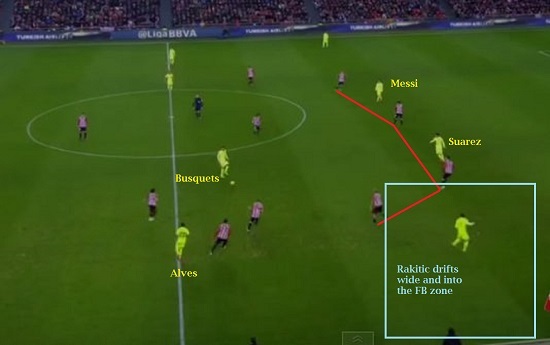 As Messi has a free role from his right side starting position, sometimes he will appear in the centre, with the right forward position left unoccupied. Rakitic will again fill in the wide position as Busquets and Mascherano are in plenty of space across the field, creating a 2-4-4 formation.

Since the end of December, the slight tactical alteration in Messi’s position to give Suarez a more central role and have Messi play with freedom, with a compensation system covered by Rakitic, has led to Barcelona to having a new 2-4-1-3 or 2-4-4 formation in many phases of play, with Neymar and Suarez in fixed positions and Ivan Rakitic in a compensational position to give positional freedom for Lionel Messi.