For the 4th time (2006, 2009, 2011), Barça won the Champions League final. Put on track by an opening goal from Rakitic, the Catalans were disrupted by a Juventus side that did not fall-off despite the difficult start. After the break, the Bianconeri were even par with their opponents, who relied on Suarez, Neymar and Messi to pick up the win.

There were no surprises with the line-ups for one side or the other: the 22 players who started were the 22 that were expected. There was some chatter prior to the match from Chellini about some possible uncertainty around the system Juventus was going to employ. However, it was the same 4-4-2 used against Real Madrid that the Turin begin this final.

The Turin fit very well in their match thanks to two sequences of successful pressing into the Barça half of the field. Pressed by Tevez, Mascherano misses a clearance and offers Juventus a beautiful opportunity for ball recovery, but Marchisio is unable to capitalize. Then, seconds later, the Argentine conceded a corner under adverse pressure again, but Barca is still able to escape unscathed.

As expected, the diamond quadrille from Juve kept Barca well on their half of the field as the Catalans play short: on the sides, Marchisio Pogba complements the work of Vidal, Tevez and Morata on the opposing side. However, when the ball-carrier is able to "skip over," it becomes complicated. Barça is able to pull themselves out of this mess through switching play from right to left. 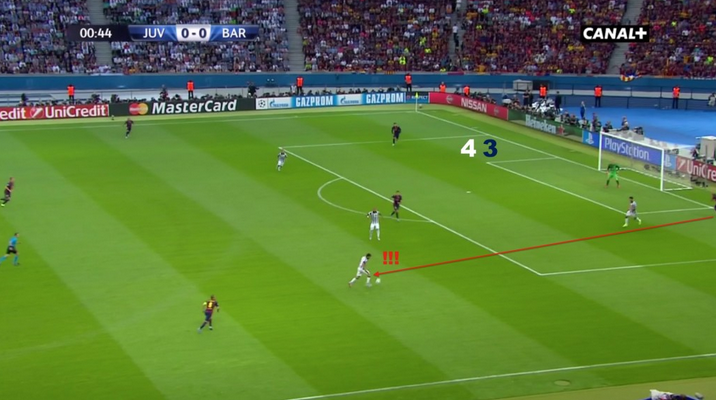 From the first minute, a poor clearance from Mascherano offers a great opportunity to Juventus who do not benefit. 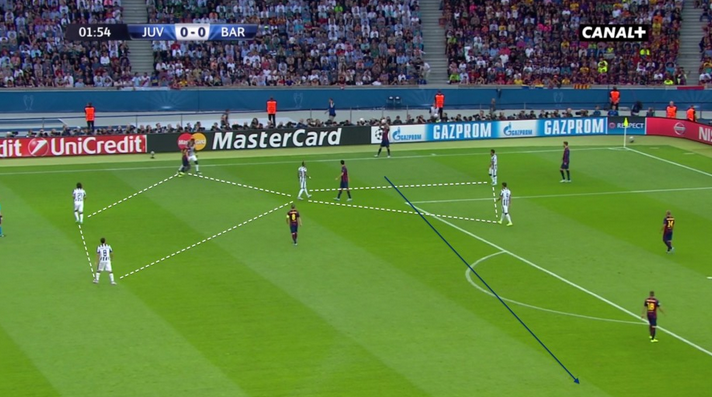 To relieve the pressure applied by Juve, Barca must either play longer or jump the relay: either off the foot of ter Stegen or by overloading one-side and then quickly switching play to the other.

Once repositioned back in their flat-back 4-4-2 the Turin side attracts Barca to its flanks. To the left and right, the Catalan side (via Daniel Alves and Jordi Alba) are left free to better find Messi and Neymar. When they receive the ball out wide, they are faced with two players: Pogba and Evra at the first level and Marchisio and Lichtsteiner at the second.

The act of forcing Barca into double layers out wide allows two things: First, it complicates things for the dribbler and second it then forces him to play negative. In short: stop the progression of Barça. 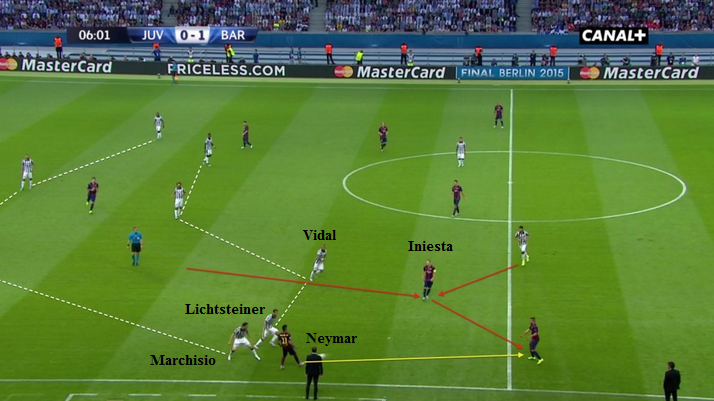 Here we see Marchisio and Lichtsteiner pressing Neymar and Vidal reacting to the pass by applying pressure on Iniesta and trying to reform the diamond. 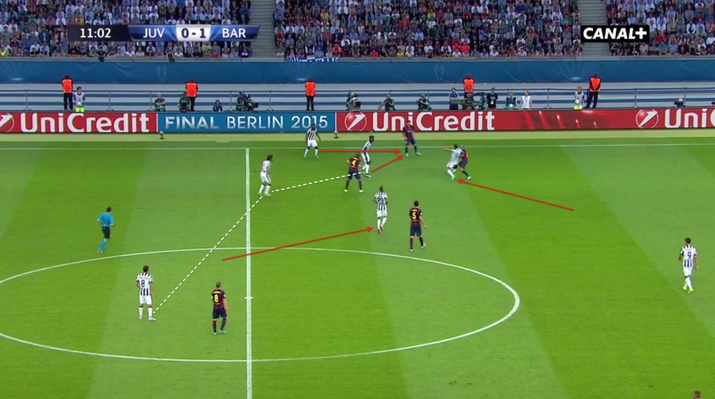 Here’s a similar scenario on the opposite flank with Evra Pogba and pressing Messi.

However, Vidal proves ineffective in his assigned tasks: he makes tackles in a vacuum and commits mistakes repeatedly throughout the first half. Without Vidal to allow the block to recover, Juve has no option but to concede play in their own half, especially as the diamond begins to leave spaces open crosswise. Instead of playing to win the ball, they must resolve to contain Barça’s attacks.

Forcing Juventus to play very low, Barça facilitates their actions based upon the loss of the ball. The Blaugrana react on each turnover, their pressure is effective and forces the Turin to push out, thereby facilitating their own transition. Most of the time, the ball comes back so quickly in the last 30 meters, allowing the Catalans to increase the pressure on a Juve defense that is becomingly increasingly concentrated. 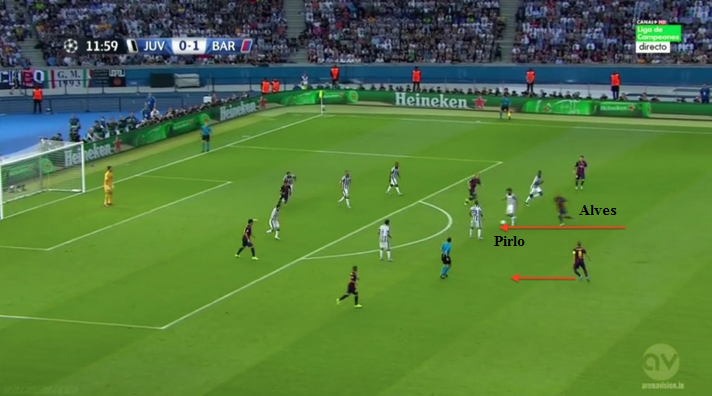 Alves just lost the ball by trying to play it through on the floor…but, the Brazilian reacts very quickly and is already in contact with Pirlo to keep him from turning.

On some sequences, Juve still speaks their quality and are able to put Tevez or Morata in good situations.

Thanks to the quick score that opened up the match, Barca is also able supports their efforts. If the ball is not recovered quickly, the team repositions itself so Suarez finds himself in the midfield area with Pirlo in front of a line of five players and a very compact middle as usual. The surprise lies in the behavior of Suarez, that does not trigger - or less than usual - to press the Juve playmaker. The amount of work Suarez does or does not do costs his teammates such as Iniesta and Rakitic or Messi and Neymar. 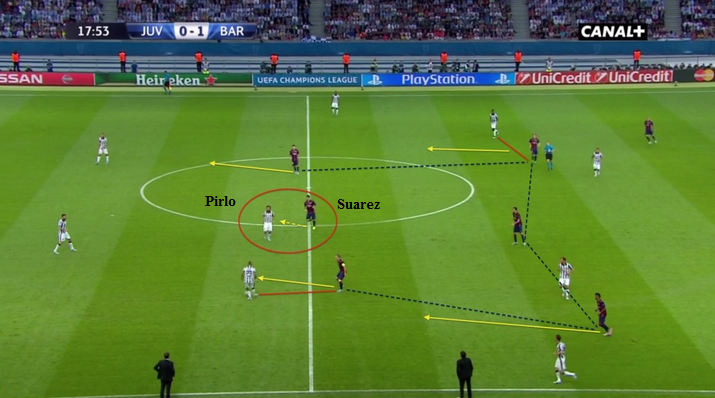 When Barca pressed usually Suarez was in the same area of the field as Pirlo. His teammates would press out on Turin players, however, they had to wait for just the right moment which afforded Juve some sequences of possession.

It took Juve 18th minutes before they held their first real sequence of possession in the match. As against Real Madrid, their ball movement was fast and midfielders Marchisio and Vidal positioned themselves intelligently to be available to Barzagli, Bonucci and Pirlo who were responsible for initiating the proceedings. When they managed to outwit Barça’s initial pressing, Juve was able to open the game down the left through Pogba and Evra.

After the break, Juve tries to stay on the front foot when facing the Catalan pressure. Interestingly, Barca have as much space to work with in the second half as the they did in the first half, where they used it to support Messi and Neymar. However, now Marchisio and Pogba were locking up mostly on Alves and Alba. 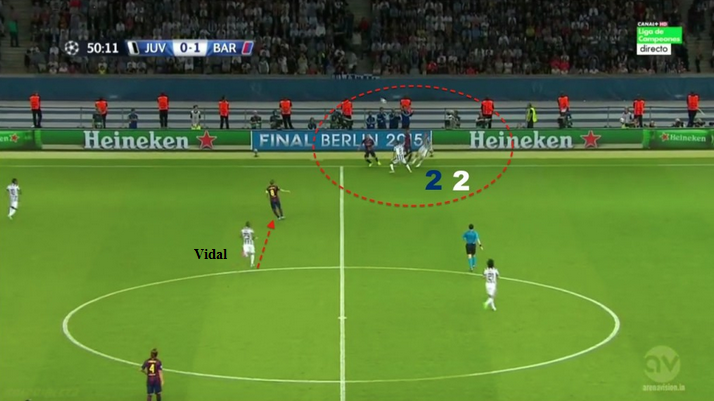 2 vs. 2 out wide with Marchisio focusing on Jordi Alba, while centrally Vidal is dealing with a supporter running wide to offer help.

This is the logical continuation of how Juventus started the second half. Barça did not have time to settle into the Turin half of the field as Alba, Alves, and Busquets were all now under constant pressure. So, Juve took advantage, alternating long, direct efforts from Buffon with their short game to get themselves out of their defensive third. When they did approach the midline, they played longer to exploit the spaces in behind the Catalan defense who were always aligned very high or they would simply reverse the game and change the point of attack.

Barça finds themselves forced to defend backwards and are not comfortable in doing this. It was not until the hour mark did we see them react through the play of Iniesta. The captain was indeed the first to start pressing again from midfield, taking with him the rest of the block. Technically comfortable and confident, even after Juve had equalized, however, Juve still managed to get by. In short, their formation was what allowed them to rebalance the debate. 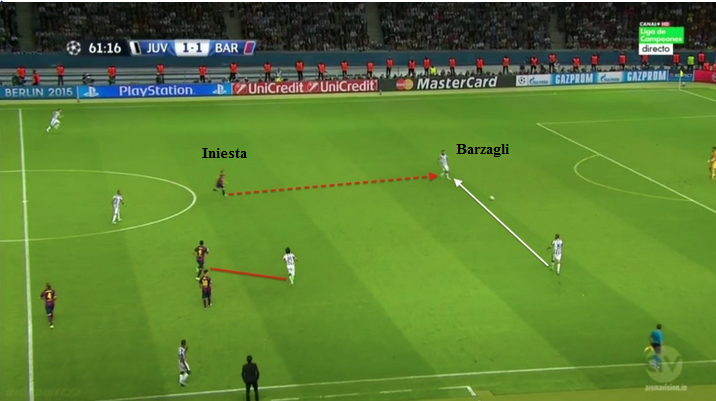 With Barca unable to pressure, they must go and fetch Juve higher up the pitch. Here, Iniesta triggers the sequence out on Barzagli. 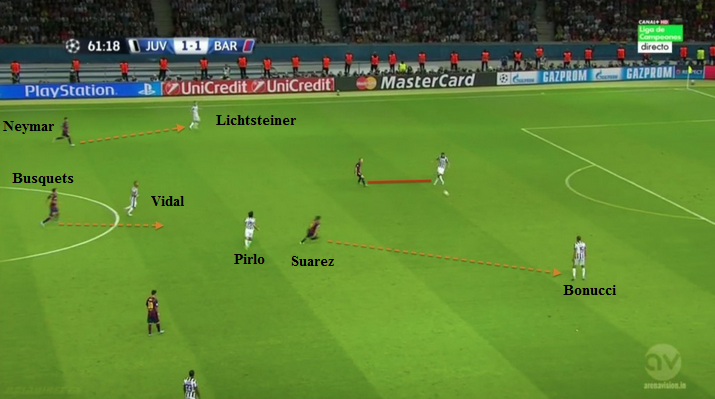 …behind him, the entire Barca block reacts: Neymar and Busquets to Lichtsteiner and Vidal/Pirlo with Suarez on lateral passes to Bonucci. 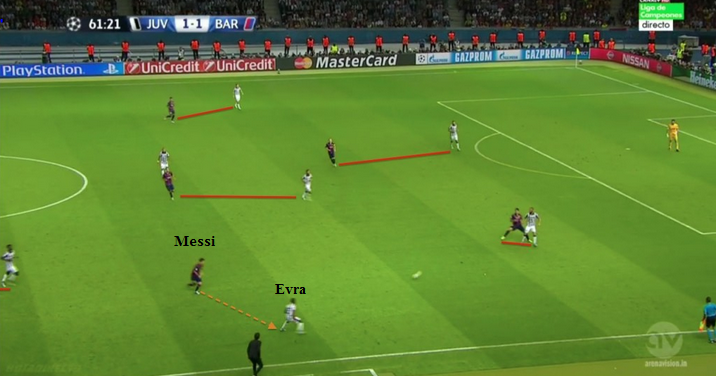 Definitely not a spectator to the action, Messi is blocking the left-flank and facing Evra. They leave only one way out and it’s through Messi.

The victory of Barcelona to end this 2014-15 edition of the Champions League makes the most sense. The best team from the beginning of the spring has finally triumphed. Dominating in the first half, the Catalans took advantage of the spaces offered by the Turin diamond, thanks to the game changes orchestrated by Messi. Their pressure then smothered Juve who could answer that occasionally until the break.

Much more balanced and rhythmic, the second half saw Juventus double their efforts to compete with Barca. Masters of possession, the Blaugrana were able to hold the ball. However, their defense eventually held, leaving enough time for their individualities to find the crack and definitely take advantage.