This session is focused on small groups of players working together to defend the space behind them.

I am first and foremost a defensive minded coach. I have had tons of success teaching teams to drop back early in two lines of four, essentially playing a 4 man midfield like a 4 man back line, and clogging up the defensive third in hopes of a few counter attacking opportunities . The concept of Pressure , Cover and Balance has been a foundation of this success. In my experience however, too often, the covering player  gets sucked in too close, the first defender dives in and gives up pressure and a well timed move or give and go can beat both the first and second defenders and send the balancing defender way out of position, exposing critical space in the center of the field.  If this happens on the back line, a lot of times the only option is to start thinking about what you want to do on the kick off.

This is where the concept of Space, Ball, Space can help. The idea of pressure in itself to me means forcing mistakes. I have had too many teams which pressure and cover well but don’t see the opportunities to win the ball back and take advantage of the pressure they have created. This is mainly because they are all so worried about getting scored on they are too afraid to break their defensive mindset and shape.  Additionally, when playing an opponent who can handle the pressure and not make a lot of mistakes, the counter attacking opportunities simply don’t come.  I have found the concept of Space, Ball, Space helps players better understand when to go for the ball as a result of their pressure thus complimenting  the concept of Pressure, Cover, Balance. It also places the players in a position to transition more quickly into possession and attack instead of just constantly dropping back trying to provide cover which leads to more and better scoring chances. Again, dropping back first and delaying the attack is critical but AFTER everyone is marked and you have numbers back, it’s time to start thinking Space, Ball, Space.

Space , Ball, Space is simply getting the players to understand the first defender is more worried about controlling space than the ball. In fact, if the first defender does their job right, often times the attacker will try to force something and “give” the defense the ball, usually with a heavy touch, failed move or bad pass. In any of those scenarios, if the covering player is thinking about the ball, especially with the knowledge the third defender will control the space behind them should the ball get by, your team is on the way to gaining back possession while still limiting the opponents opportunities to score in the process.

The following session explains how to take your team through the basic steps of creating team pressure with a focus on winning the ball back to immediately gain a numbers up possession opportunity. During training this can look like a defensive back line drill, however ideally this concept is employed in the midfield or attacking third during a game with a combination of 1 defender, 2 midfielders , and 1 forward.

Individual Pressure – Keep them in front of you

To practice this, pairs take turns passing /pressuring and receiving /dribbling. In a 10 x 20 grid, one player starts at the corner and passes the ball, with pace, to the player in the opposite corner. The passing player then tries to close down the receiving player and prevent them from dribbling across the end of the box.

The coach should stress here it is ok for the attacker to have the ball, as long as they do not get past the defender and they stay contained in the box. The coach should encourage good defensive posture and footwork, often times called “jockeying”. Defending players should NOT dive in or stab for the ball. 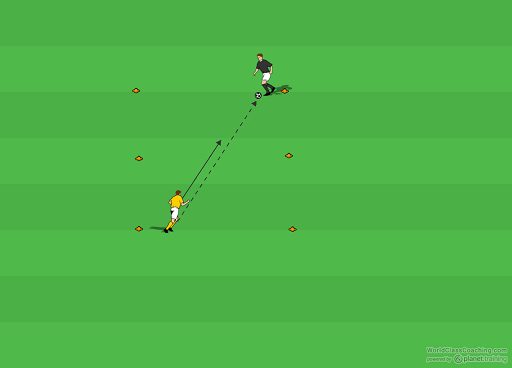 Pressure and Cover Together  to win the Ball

Once the space is controlled, the next player, or covering player, should be focused on the ball and more specifically what happens to the ball as a result of their teammates pressure.

To practice this, the grids are expanded to 20yd x 20yd. Two pairs of players , one from each team in each grid, are added with one team as the pressuring team( defending ), the other as the possessing team ( attacking ).

The coach should stress going for the steal by the covering player in this drill. If a player is worried about the open man, remind them the drill is part of a progression and forcing and stealing passes is the goal.

Play starts with the pressuring team serving the ball across the grid to one member of the possessing team. 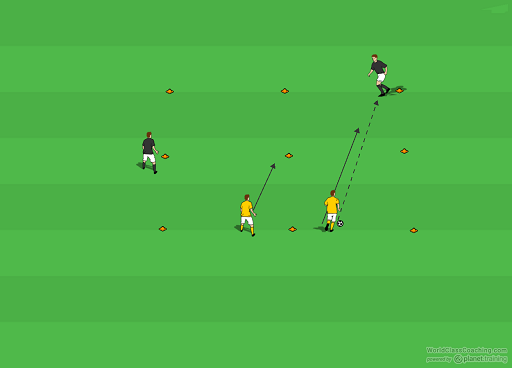 The possessing team member comes out to receive the ball with a goal of completing a pass across the next grid to his teammate. The additional pressuring player is trying to hold a position of cover, but ALSO be in position to steal any pass attempt that is made. IF the possessing team makes a successful pass, play continues with the possessing player trying to pass back to their team mate with the pressuring team trying to force and then steal the pass. IF the pressuring team wins the ball, play is stopped, the teams switch roles and the drill is restarted from the beginning. 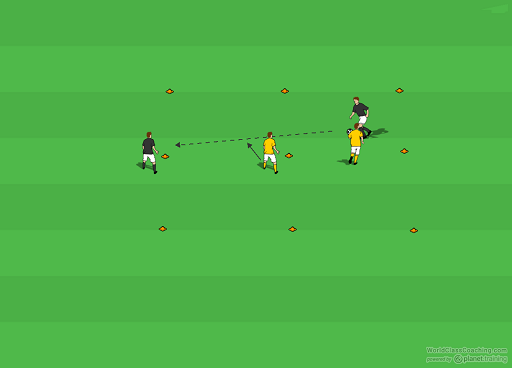 After the pairs have “gotten it” the session is expanded.

The grid is now 30yd by 20yd and an additional pressuring member is added. This completes the Space, Ball, Space concept and should allow the ball focused player to be very aggressive in attempting to steal the pass. At this stage, the possessing team starts with the ball and the play is basically free with in the grid.

The coach should focus the pressuring team on moving together to create pressure on the attacker with the ball, marking the second attacker ball side and having the ball focused player in constant position to steal any pass attempt that is made. The game becomes 3v2 keep away if the pressuring team steals the ball.  Set a number of completed passes, number of splits, time in possession etc. to signal the restart. 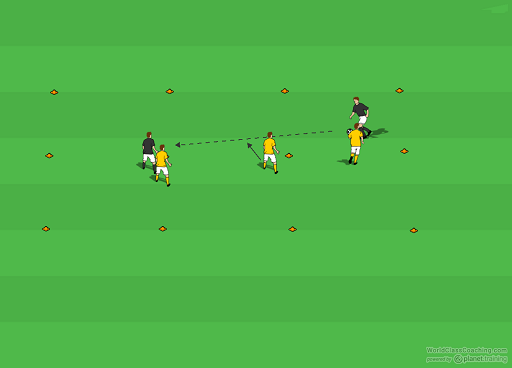 Winning Back Possession of the Ball

The final stage of this lesson is a game condition activity with 8 field players plus a keeper. Additional players will be in groups of 4 and will rotate in at each stoppage This is a defensive third drill executed on a half field .

The play starts with the keeper distributing the ball to the two central attackers. Two of the attacking team members are neutral and are stationed behind two cone gates in the wide areas of the field. 4 defenders start at the top of the box and chase the keepers distribution out to try and pick up the Space, Ball , Space rotation immediately.

This is a defensive drill so the attackers should initially be made to get wide in position to attempt a service or cross rather than just attacking straight to goal. Attacking players can use the neutrals, who must stay behind their cones and on their side of the field to start the drill. Should the defending team win the ball, they score by making a pass through the gate to either neutral. 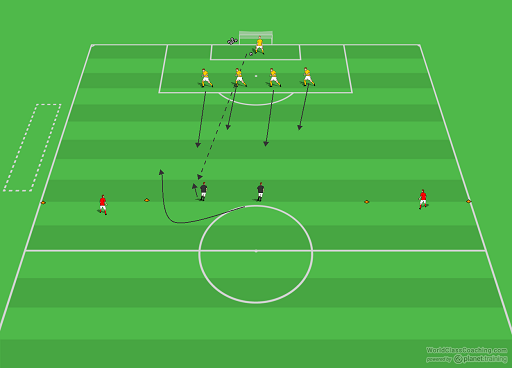 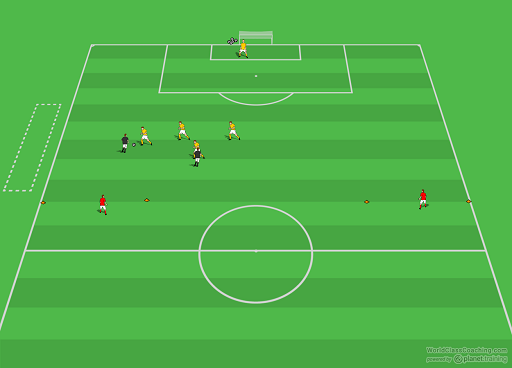 The defenders essentially put into play the Space, Ball, Space activity they have just been working on, but coming from a traditional Pressure, Cover , Balance set up. ( thus the addition of one more balancing defender). IF the third defender, who is responsible for the next space, picks up good pressure, the 4th defender can also worry about the ball as well, with the Space, Ball, Space, concept repeating across the width of the field.

The coach must stress here that in a game, there are still 3 defenders ( back line ) and 2 midfielders ( holding the center ) left to “cover” should the attacking team break the pressure and get through with the ball. Ideally the attackers will not force play and will drop the ball back to the open neutral, who has 5 seconds to release the ball back into play. Just like in a game, the neutral can try to break pressure by sending a ball over the top. The defenders should move up aggressively anytime the ball is dropped and seek to be in position to steal any attempt to pass the ball back in to the attackers or loft the ball over the top of the pressure. WHEN, the defenders win the ball, the coach should give them 10 to 20 seconds to attempt to score, which is also time for the attackers to try and win the ball back and counter. If the attackers win the ball back they do not have to go wide again and may go straight to goal. After this, the teams should be rotated and play should continue. 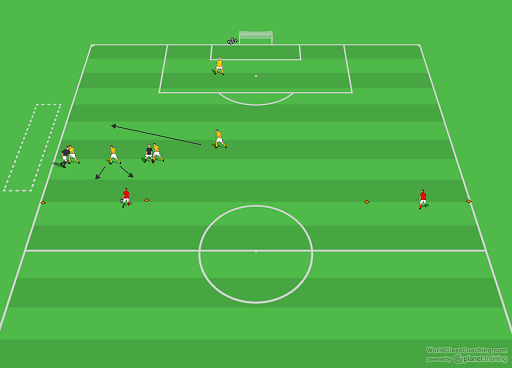 As a final progression, I add one of the neutrals into the attacking mix to start and allow the other neutral to move laterally across the field behind the cone gates.  This presents a very realistic game situation. Should the attackers overwhelm the defenders an additional back line of two more central defenders can be added to the defending team and the remaining neutral can be freed to play on the attack. The defending team scores by dribbling through either cone gate.

Adding the idea of immediately controlling space as a team, with a focus on regaining possession of the ball is one of those concepts which allows a team to “take the next step”.  As I mentioned in the beginning of this article, I expect at least one forward to pick up pressure immediately as part of this concept in addition to one defender coming up to pressure aggressively. At almost every juncture of this exercise, the opportunities to gain possession and transition with numbers up are there, which mean the attacking, possessing and switching options are endless.  As players practice this, they will learn to recognize the opportunities they have to both fall back and get organized in Pressure, Cover, Balance, but also then when they are in position to use the Space, Ball, Space concept to pressure aggressively and win back the ball.