By: Dan Minutillo - Author of Formation Based Soccer Training

Coaches of great soccer teams like Barcelona, Real Madrid and Arsenal struggle to find and maintain a balance between game day offense and defense measured by goals for as compared to goals against. Arsene Wenger, longtime coach at Arsenal, said as late as April 2013, over 30 games into the EPL season that Arsenal had only now just found the proper balance between offense and defense during League games--too many goals against, not enough goals for. Numbers up on attack, high in the front third of the pitch but numbers down in the middle third of the pitch when defending on transition.

What is game day offensive and defensive balance and how is it attained by a team?

Game day offensive and defensive balance is a tactical maneuver, no matter what formation is used, to ensure

that a team plays high enough up the pitch with enough numbers on offense to provide scoring opportunities but with players in a position behind the ball to ensure that an easy goal is not scored against the attacking team on transition, i.e., attacking with protection.

Using Arsenal as an example, television commentators and pundits had a field day in the early part of Arsenal’s 2012-2013 season claiming that the team had a very leaky defense, not solid enough to make it into the top four in the EPL in order to qualify for Champions League. As Arsenal moved closer to 4th place in the EPL, the pundits said that the same Arsenal defenders had “stepped up” and played better to assume their responsibilities as backs. What really happened is that Wenger changed the system of play to create offensive and defensive balance in the later part of this EPL season.

Wenger realized that Arsenal’s high line used on attack was easily exploited on quick transition because offensive and defensive balance during the run of play was off. Too many players in the front third of the pitch and not enough players, or, the wrong players supporting the attack but ready for transition.

This offensive and defensive balancing act can be solved tactically a few ways, for example:

1. Add more speed in support of the attack by substituting faster players in deeper positions in the formation for slower players

2. Hold a lower (deeper) line of defense when attacking

3. Attack high but with fewer players, or

4. The Barcelona way, to immediately pressure the man with the ball, double up on him, and put players around the ball cutting all short passing lanes high up field in order to get the ball back quickly to avoid quick transition by the opponent.

How does each solution mentioned above help a team balance a high powered, numbers up offense with a solid defense during the run of play so that quick, potent transitional play by an opponent does not result in a goal against?

First let’s consider game day strategy as it relates to:

2. System of play within a formation which can include:

A. Large group tactics (like tactical positioning for midfielders or backs for example)

B. Small group tactics (the players immediately around the ball) and

C. Individual tactical play, or as it relates to this article, changing player personnel (substituting) and changing individual defending tactics.

And then, explain how each of these elements promotes offensive and defensive balance.

BALANCED FORMATIONS
This is the easiest and clearest part of the analysis to attempt to avoid a goal against on transition by providing balance. Not considering a system of play within a chosen formation (just looking at a formation on its face), a flat back 3-4-3 should be easier to gain an advantage against on transition than say a 4-3-2-1 because the 3-4-3 is more naturally top heavy leaving more space on the wings to get behind the line of defense leaving fewer players overall to contend with on transition than the 4-3-2-1. Again, absent a system of play countering this issue, the same can be said for the 4-3-3 and possibly the 3-5-2 when compared to a 4-3-2-1 or even a 4-2-3-1. More players are naturally more available to form a line of defense or interrupt the counter attack quicker, absent a system to the contrary, with the 4-3 (seven players available to handle transition) or 4-2 (six players available to handle transition) and this still leaves 3 or 4 players high enough to attack in either formation. Overlaying one formation to another, on its face, demonstrates this point.

BALANCED SYSTEMS OF PLAY WITHIN A FORMATION

Let’s start with 2A, a large group tactic, holding a deeper line of defense on offense. This can be accomplished in a variety of ways. If the chosen formation calls for a flat back line of defense then merely drop the line a bit deeper on attack with more space between the midfield players and the backs and more distance from the line of defense to the ball. On transition, players will already be in position to mark attacking players without having to quickly drop. A deeper, flat back line serves as a safety net making it more difficult to penetrate and much easier to handle transition.

A deeper line of defense can also be accomplished in any formation by using a dedicated sweeper, deeper than the other backs, or by retracting an inside back a few yards behind the other backs to provide depth or cover on defense as soon as the line of defense is set during the run of play. This additional depth when defending also makes it more difficult to penetrate on transition.

Small Group Tactics
In any formation, even the 4-3-3, using a high line of attack but with fewer numbers high up field is a small group tactic which will leave more players a bit deeper for quicker marking on transition. When the opponent takes the ball, less players in the front third of the pitch allows more players to mark deeper. This can be accomplished no matter what formation is used. As an example, in a 4-3-3, the wing forwards stay retracted leaving a striker/center forward up top, or, as Messi does over and over again, the striker could stay retracted, drifting deeper to space in the goal channel during the attack with the wing forwards higher, either way, there will be more players behind the ball on transition.

Another small group tactic used by Barcelona is the six second rule on transition. Once Barcelona loses the ball, a first defender immediately pressures it, another player double teams the first attacker, and all other Barcelona players near the ball either cut passing lanes or form a fortress around the ball so there is no escape without either an interception or a bad pass which either moves the ball backwards our out of bounds attempting to do so within 6 seconds after losing the ball.

Individual Tactics
This is one of the few times that a coach can truly influence the outcome of a game as it relates to transition, substitutions. Speed at the back and on the wings will always serve to counteract attack on transition. The outlet pass for most transitional play is wide, to a winger who moves the ball up field in space. There is usually more space in the outside channels during the run of play and wingers usually are the speed demons on a team. Moving a ball from pressure inside to a wing and then quickly up field wide or moving the ball high to a lone striker or group of forwards is the essence of transitional play especially after a shot on goal.

Why? By the very nature of attack, more of the attacking team’s players are up field after a shot on goal. If this shot on goal by the attacking team is saved by the keeper, this usually creates a good opportunity for the keeper to quickly start transition out of the back either wide or with a long punt up field. Focusing first on the long punt, a deeper line of defense or a retracted sweeper will help thwart the attack. If the keeper attempts to play wide out of the back to start transition, deeper holding, fast wingers (forwards or midfielders) will serve the same purpose.

Another individual tactic to slow transition is substituting a speedy center back to keep up with that sole striker or substituting to provide more speed on the wings either in the forward or midfield position to thwart transition. Speed will allow the marking player to drop and mark quickly in order to delay the attack, one on one. It doesn’t matter if the first attacker is delayed in the back or middle third of the pitch so long as he does not make it to his front third unmarked.
Shepherding or steering wide is another individual defensive tactic that helps avoid transition. In most cases, coaches will encourage players to shepherd or steer a first attacker into help, to a teammate, so that the first attacker is pinned in and the ball can be taken 2 on 1. However, in the case of transition, it is best to shepherd the first attacker wide, away from the goal channel and toward an outside channel toward the closest sideline in order to delay an attack on transition because less players are usually available to defend on transition as mentioned earlier.

Offensive and defensive balance during an attack can be accomplished by choosing a back heavy formation, or by using the large group, small group, or individual tactics mention above as part of a system of play within any formation. But, in any event, if you have one team with a line of defense comprised of the likes of Vidic, Kompany, Maicon, and Thiago Silva, this article would be irrelevant.

Dan Minutillo - Author of Formation Based Soccer Training
E-mail minu@flash.net
Telephone 408 998 8900
Dan Minutillo has coached soccer for about 23 consecutive years, all ages, and both genders. He holds a National diploma from the NSCAA among other California State licenses, and he is the author of the best seller, “Formation Based Soccer Training”. He has had articles nationally published about third man runs, plyometrics, speed of play, player motivation, differences in coaching club soccer as opposed to high school soccer, among others. He is presently the head men’s varsity soccer coach at Leland High School in San Jose, CA. 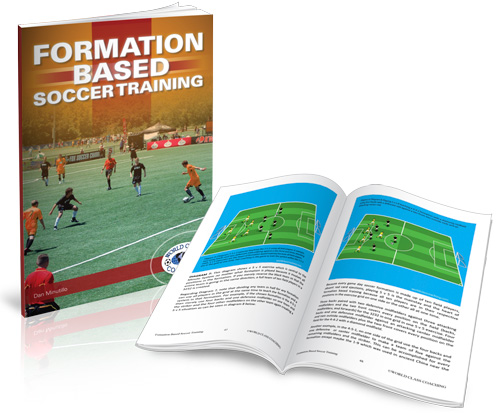