Opening Up After Recovering Possession

Level of ability: The players should be well familiar with the concept of making the pitch as big as possible when in possession of the ball. Being able to play both short and long passes is a must as is receiving and controlling the ball with an oriented touch.

Adaptations: Reducing the number of participants in the practices makes it easier for the players to experience success and understand how the key concepts play an important role in achieving the aim of the session.

Number of players: This training session is planned for twenty players. However it can be adapted to any number of players. For the first two practices the team is divided into two groups so that we could have two setups working simultaneously. In the third practice and the global game we rotate four players who play a 3v1 rondo and who will then be included in the main exercise.

Aim: To secure possession when recovering the ball.

Key concepts:
1. Open up on winning the ball.
2. Create space – make the pitch as big as possible.
3. Positional superiority – between lines.
4. Break lines.

Preparation: One team starts playing a 5v2 rondo in the central area that measures eight yards by eight yards. The defending team apart from the two defending players inside the rondo have two players outside the area on the sides and an attacker in front of the goal they aim to score in upon recovering the ball.

P.S. This practice should be preceded with a movement preparation exercise. 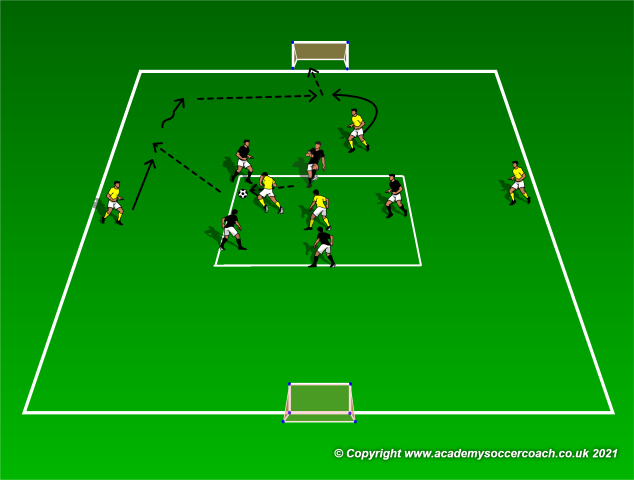 Preparation: The area of practice should measure twenty five yards by twenty yards. The team in possession of the ball (blacks) are positioned at each side of the perimeter. The team recovering the ball (yellows) are positioned inside as are the two neutral players (reds). The way the players in possession of the ball are organised refer to the following positions: attacking team – central defender (4), two lateral midfielders (7 and 11) and the forward (9). The neutral players are the central midfielders (8 and 10).

Description: The team in possession aims to retain possession of the ball with the help of the two neutral players. The team recovering the ball aims to gain possession and switch roles with the attacking team. This means that on winning the ball teams must open up while if the ball is lost they have to regroup into a compact formation to limit the time and space of the opponents. 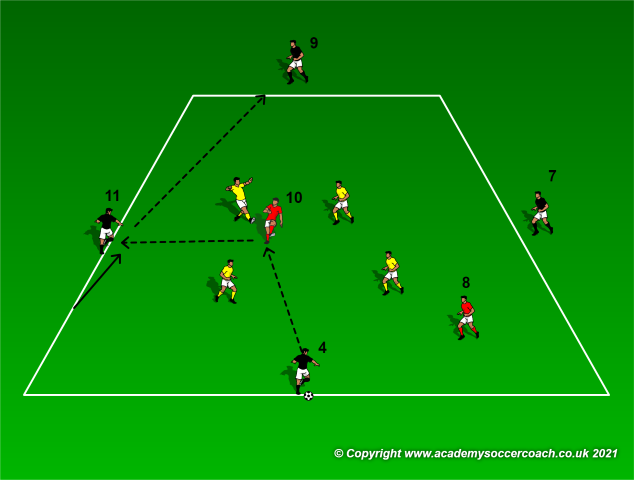 Preparation: The area of practice should be fifty yards in length by thirty five yards in width. An additional two yard wide channel is to be added to each side of the area. Both teams play with six players and a goalkeeper while another two players play with both teams in possession of the ball. When in possession of the ball the attacking team refer to a 1-2-4-2 formation where they have two centre backs, a full back on each side and two forwards. The two neutral players played as midfielders for the team in possession. 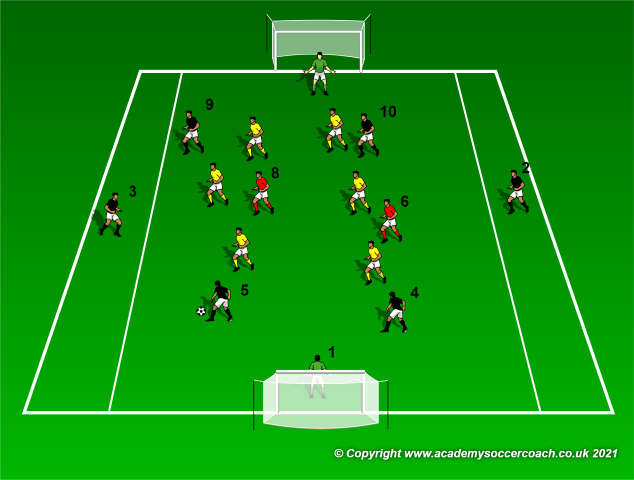 Preparation: The area of practice should be fifty five yards in length by forty yards in width. Each team consists of a goalkeeper and seven outfield players. Each team plays in a 1-2-3-2 system of play.
Description: Normal soccer rules apply. The offside rule can be introduced. This depends on the level of the players and the rules they play with during competition. This session is based on 8-a-side soccer normally without offside but it can still be used by other formats by adding and reducing the number of players, increasing or decreasing the area and including the offside rule. 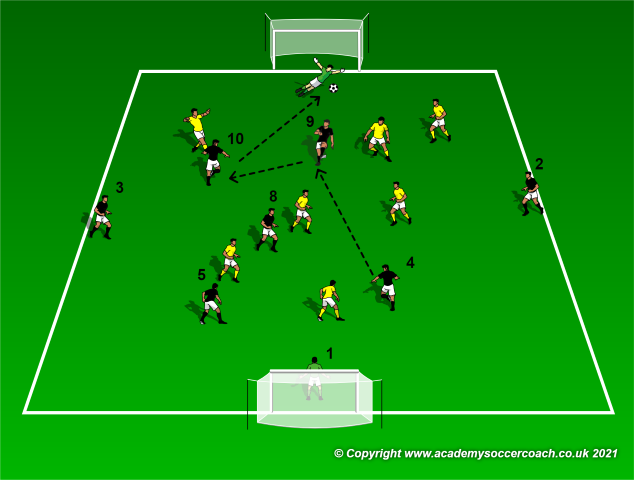 Cool down: Players juggle a ball using different parts of the body and using both feet. The session ends with the players stretching statically. Each stretch should be held for between fifteen to twenty seconds. Players should focus stretching the quadriceps, hamstrings and glute muscles.