I find a Keepers footwork is often overlooked. I believe it can be the difference between getting across to save a shot and not.

What I look for in footwork is:

It’s that simple. I find the 3 S’s stay in players’ heads and helps them practice correct technique. Players, especially young ones, tend to like the sound of heel clipping and often bang them together when performing sidesteps. This should be avoided as it can cause a player to trip over. We avoid crossing over our legs for the same reason and it also slows us down and restricts movement. For example if legs are crossed over and the ball deflects meaning we have to make a save on the other side we would have to uncross legs then get across. With short and quick sidesteps changing sides is easy.

As well as these drills, sidesteps can form part of a general warm up. I often do 2x2, so 2 facing one way and 2 facing the other. This is also good technique for outfield players.

These ideas are flexible and can be used at once or follow on from each other in a circuit. This might depend on numbers, time and skill. I use these drills as a base and adapt all the time, these are easy to adapt to keep things interesting. 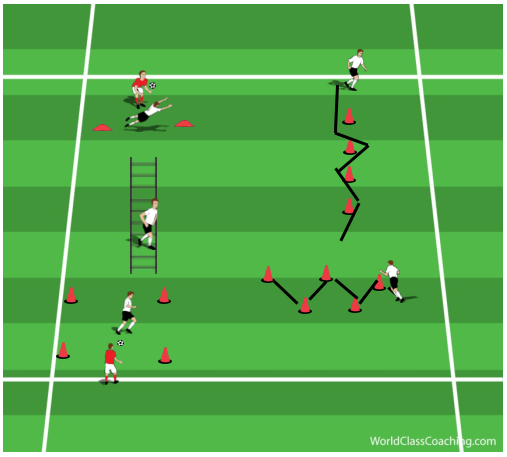 Ladder: There are a number of techniques that can be used by the player to get though. Can go forwards quickly, shuffle through, sidesteps, back and forths to name a few. Be creative it will all help with footwork and movement. You could also have the Keeper work handling at the same time by getting a coach to serve the ball in between movement. Here though I have included that and a final save at the end.

Cones: The close cones together can be used similarly to the ladder however with the added pressure of knocking them over, they should be moved as close or as far as the keeper can handle whilst still being difficult.

Cones ii: The second batch of cones are to work the Keeper on angles. Imagining the cones are players the player must get down the line of the cones, touch the top and then hurry to the next one. The cones can be replaced with balls and Keepers can pounce on them.

Depending on number of coaches and players you could even add more opportunities to make a save.
Another footwork drill that incorporates saves; a square, Keeper starts in the middle, coach points to a corner and the Keeper must get to the corner as quick as possible (using good technique) return to the middle and make a save, coach serves once keeper is set.

Footwork goes hand in hand with positioning. Can the Keeper get down the line of the ball and remain in the centre of their goal. This brings this to life in a structured way. As well as good footwork can we now also add:

The drill itself is fairly basic but difficult to nail. Keeper makes save at each point. This can be adapted to be taking shots at different angles, heights and varying deliveries (volley, throws, off the ground). You could also time each Keeper to add an extra dimension. I’ve done it with three servers but can be done with just two or as many as you can fit in (beware of tiring out the Keeper too much). Remember this drill is about working the Keeper not scoring a top corner wonder goal. 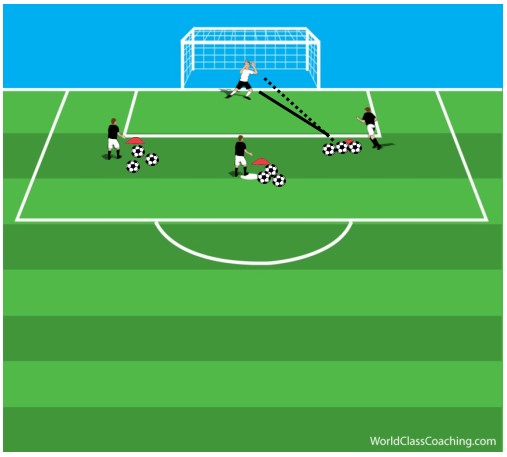