This drill is very easy to set up, is relevant to all ages and has a great amount of variations. When working on footwork for your goalkeepers, especially when working on a new drill, it is important to emphasise the quality of footwork and not to put too much emphasis on the tempo or pace that the drill is executed at. It is always vital that your goalkeepers feel confident that they are moving technically well and always under control, then and only then should they look to increase the tempo of the drill.

Set up
Cones are set up as diagram below and goal size is between 4 – 6 yards, depending on age / ability. 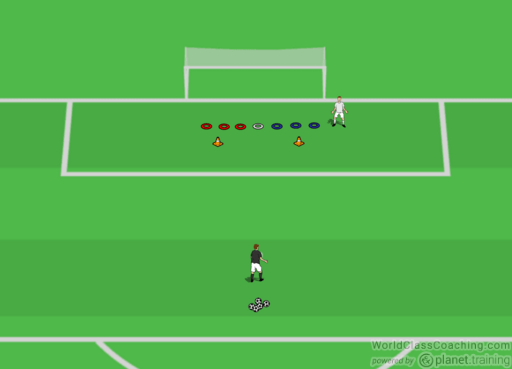 The white cone is the centre cone; it is in line with the centre of the 4-6 yard goal.

The goalkeepers start from the outside of the cones and while always facing towards the coach they step laterally over the cones. Before they get to the white cone they step forward quickly to move into the centre of the goal, being ready for the coach who will strike a shot at goal as soon as the ‘keeper is in position. 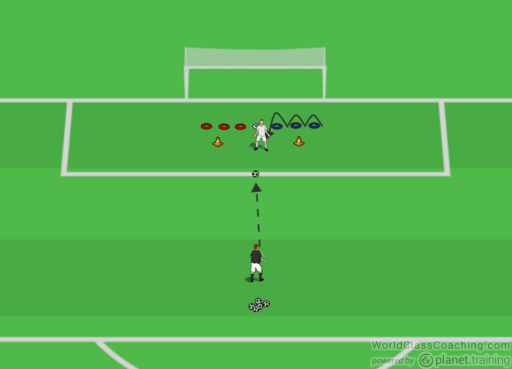 Variations
While still facing forward, the goalkeepers slalom in between the cones in a “forwards and backwards” stepping movement. 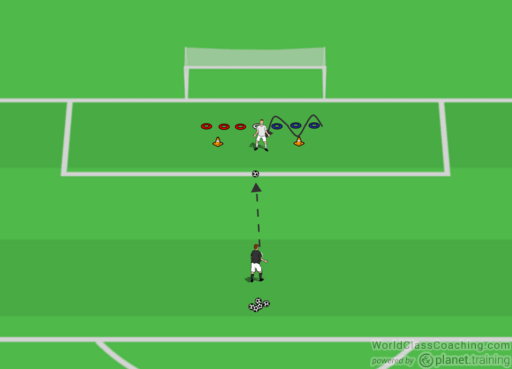 Variations
Rather than facing the coach, the same drills can be performed while facing the white centre cone, now the movement over the cones should be sharper because the goalkeeper is moving “forwards” instead of laterally, but as earlier, before the ‘keeper reaches the white marker the keeper now turns 90 degrees to get into position to face a shot from the coach. 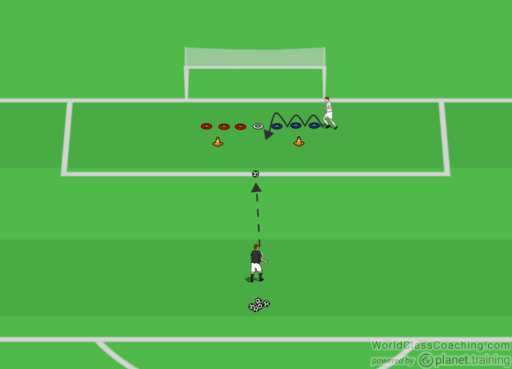 The slalom style movement can also be performed facing the centre cone and this means that the slalom movement is lateral instead of forwards and backwards as it was earlier.

The coach can also vary the types of feed throughout the drill.

Progression
The drill can also be progressed to incorporate a diving save. 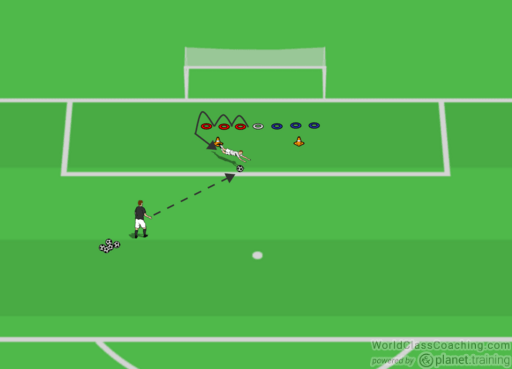 Starting from the centre cone, the goalkeeper now moves towards the outside cone before moving around the “front post” and performing a diving save.

Progressions of movement are as before.

I.e. facing the coach, facing outside cone, slalom forwards and back and slalom laterally.

The coach can also vary the types of feed throughout this drill.

I.e. Low, medium or high feeds, thrown from hand or struck from the ground.

Coaching points:
As mentioned before, it is vital that the goalkeepers are comfortable moving smoothly and controlled before the coach asks for the drill to be performed at a higher tempo.

Remember to work both sides and emphasise the importance of good diving shape and excellent handling at all time throughout the drill.