It is almost just as simple as it sounds. The fact is, defensively the most important space is only 8 yds wide and 8 ft high, and is always stationary in the center of the field. Tucking in and protecting this space is a guaranteed way to have a chance for victory in almost every game. Conversely, moving players out of this space by sucking them out into the wider areas of the field has to be the main offensive goal. This session works in a half field to help defenses recognize how not to get sucked out and helps offenses recognize how to not force play by clogging the middle up even more by utilizing the wider area of the field and crosses. 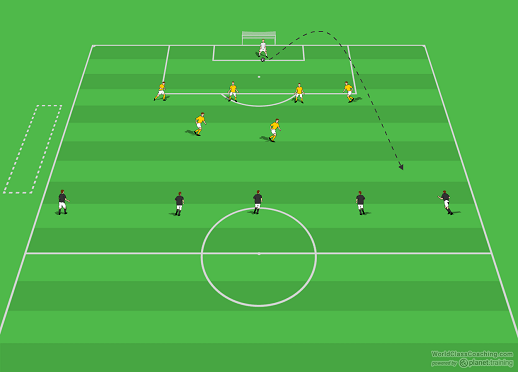 The attacking players should move into good attacking positions with a forward high challenging the back line, supporting players in the middle of the field who can connect with each other and an overlapping or wide player to entice the defense to come out of the box and into the corners. 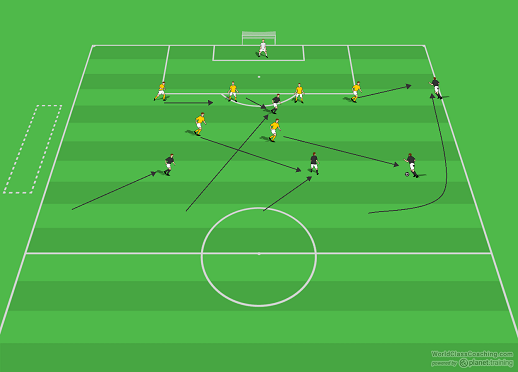 The attacking players should keep possession until an opportunity arises. This happens when the defenders give up space and come out at the wrong time and place to challenge the attacking play. 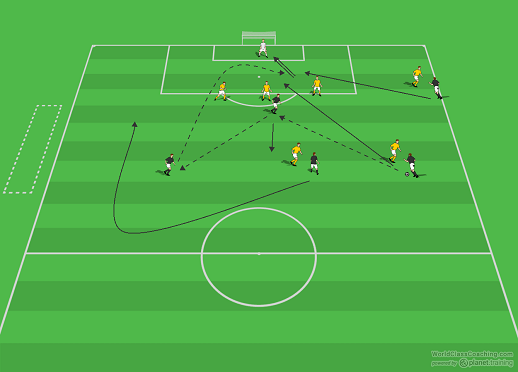 Coaching Points
There is a fine line defensive line here. Wait back too far and yes, the space is covered, but you are going to get pounded. Cheat up to far and get too aggressive with challenges against a better side and again, you are going to take a lot of shots. About the only offensive coaching point it to keep the ball, use the width and not force play. Defensively however the coach should encourage the defenders to work together to create pressure on the ball as a unit. IF there is no pressure on the ball at all, the defenders should mark the target players and only step out on the ball when the attacker comes in to close, not step out too early which not only gives up space, but has little impact of the attacker with the ball.

Set Up
The next progression should help drive home the ideas of both protecting space defensively and using width and possession offensively. 6 defenders are still taking on 5 attackers. However, one attacker must stay inside the box. Additionally, two goals are placed wide at the top of the defensive third for the defenders to play out and score on. The attacker confined to the box is under off sides rules, it is up to the other attackers to realize when the player in the box is an option and when they are not. 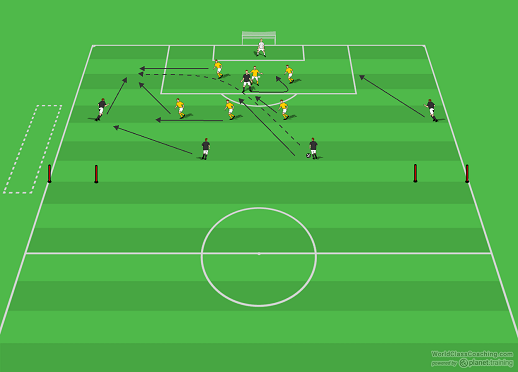 IF the defenders keep good shape and marking in the center, they will face crosses but should be able to hold the 5 attackers at bay. However, as the next diagram shows, IF the defenders get sucked out and give up central space, the attackers should have some quality chances to score. 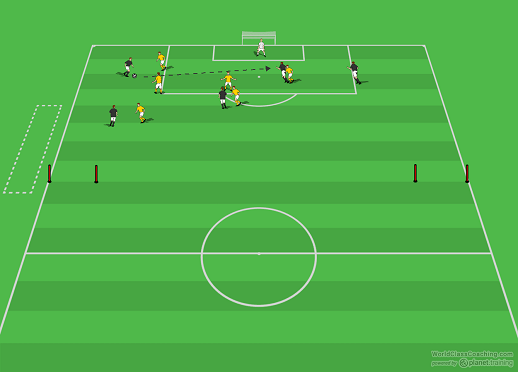 Coaching Points
The coach should encourage both sides of the ball here. The defenders should stay organized and patient, and wait until the attackers compact themselves to attempt to play out and counter. The attackers should keep possession wide and also be patiently waiting for those opportunities where the defenders open up critical scoring space.

Opening Up After Recovering Possession