In a recent high school district championship match, the perennial district champs found themselves down 1-4 to the usual runners up with about 20 minutes left to go in the match. After a furious comeback to level the score and force overtime, the comeback win was completed off a corner kick from the right side, which was finished at the near post by the outside right back. Not an uncommon occurrence on corners or game critical situations but why doesn’t this happen more during the run of play, especially at the youth and high school levels?
While it may sound a bit strange to let your outside back – or any other player for that matter – just roam free the fact is, most back lines operate with 1 or 2 players up and in many situations, this numerical advantage can be used to your teams benefit in the midfield and forward lines without terrible consequences to your clean sheet. Here’s how: 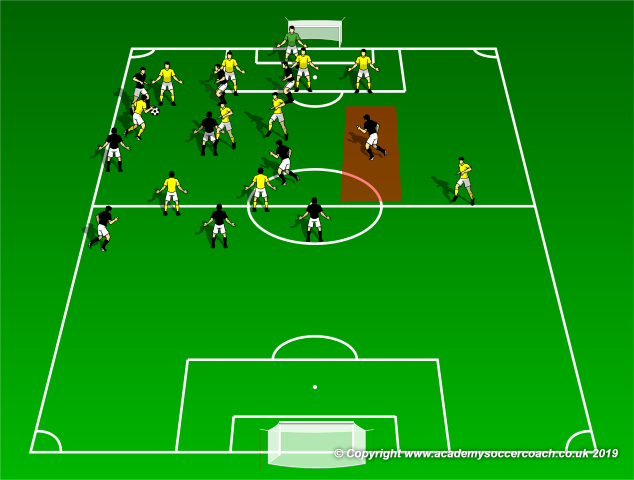 Even matched up against a defending side ( yellow ) in a 4-3-3, note the outside back in the area shaded in red. Also note the holding mid at the top of the circle for the attacking ( black ) team. The attacking side is in clear possession with a 6 v 7. The wide defending forward is only dangerous if possession is lost PLUS the ball has to come through the shaded area where the attacking outside back has moved into. The attacking side has players centrally with good recovery angles should possession be lost so why not move another player up and create a 7 v 7 in the attacking third? By doing this if one defending player is beaten, one attacking player will be wide open. Or, the defending side will drop one of their forwards into the midfield to which I would say, move another defender up! Put the pressure on the defending side and trust good central recovery angles to nullify the counter. 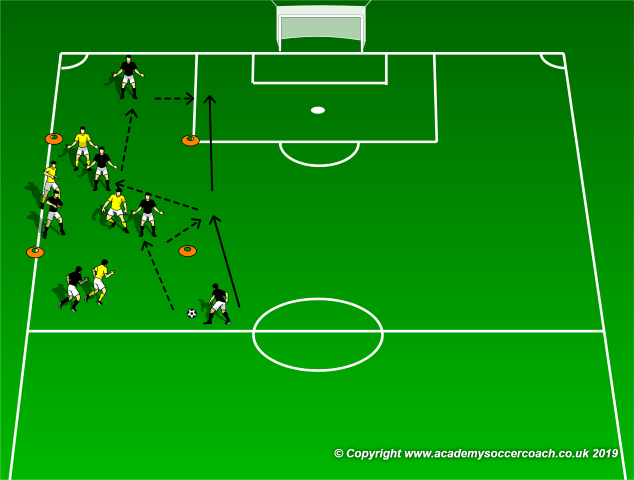 In the outside third of a half field, set up a 20 x 30 grid as shown. Play is 3 v 3 inside the grid. The attacking team has 2 additional players in their defending end ( they are defending the half line ) along with a target player for the defending ( yellow ) side. The attacking team also has a target player at the other end, who must receive and then return a ball out to another attacking player for the score. To start, only one designated attacker from the defensive area closest to the half line may advance up the field, un marked , outside the box. This player ( as shown above ) starts play by sending a ball into the cone grid, receiving it back, sending it back in and the receiving the scoring pass from the attacking target player. The players inside the grid may combine as well and skip the supporting player outside the box as long as at least 2 passes are made inside the box. The ball may also be dropped back. IF the defending side wins the ball they may pass directly to their target player who scores by dribbling the ball over the half line.

Progression
The idea is for the attacking side to use the extra support at every area of the field. The ball can be worked around until a good chance to hit the attacking target player is created, at which time the supporting attacker, who is essentially running an overlap can move up to receive the scoring pass. Initially this is all unchallenged, however, as the players get the hang of it, more game like pressure can be applied. First, allow the defending target player to move freely, either inside the cone grid, or out wide with the supporting attacking player. 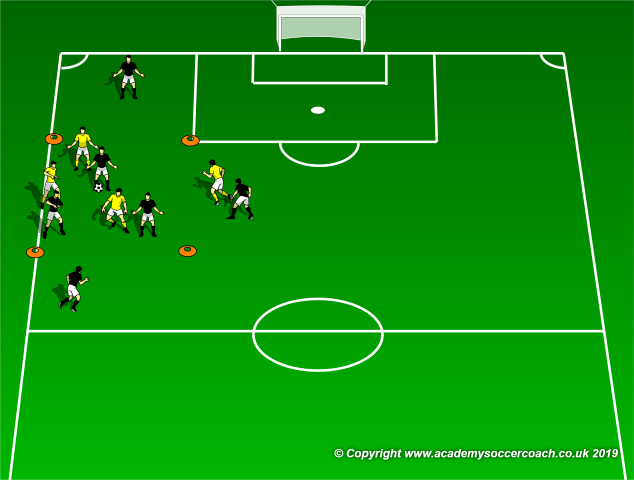 As shown above, this will free up an attacking ( black ) player for the drop and the coach can decide whether or not to allow a ball over the top now or save that for a progression as well. Regardless, the attacking team only scores when the supporting attacker moves from the back to receive the final pass.

As a final progression, allow one defending player at a time to leave the cone grid and support either attack if the defending team ( yellow ) gets the ball or defense if the black team has possession. This will create the need for the supporting player to “ get back “ and defend however to make this game like, the coach should allow an attacking player to leave the grid and drop back in to defend, provided the original supporting player who drifted up steps into the cone grid to cover.

Coaching Points
The focus is entirely on the attacking side using their “extra” player to create pressure on the defending side followed by the attacking sides ability to recover is possession is lost. The coach should start by encouraging the designated player from the back to be active, vocal and aggressive in moving up to support as this ability will translate to success throughout the entire match not just on corners, set plays or when time is running out, it could be the difference!