“Switch it!” Standard game day lingo for parents, players and coaches alike. That open person on the far side, so tantalizing to hit a long ball to. The problem is, pressure around the ball can take the long switch away. Also, once the ball is in the air, an organized team can shift and nullify most of the advantage gained by the switch. Contrary to popular parental belief, the switch is far less about the open player scoring and more about keeping possession or changing the point of attack. Still, an open far side player will always receive attention from the defending team thus your side can use this to open up the middle by faking the switch.

There are 3 main types of “switching”. First, the switch around the back line, second is the switch on the ground through the mid field and third is the long ball switch which can include a back side service or cross. During all of these, a team can find chances to exploit vulnerable space in the center of the field. To start, try this: 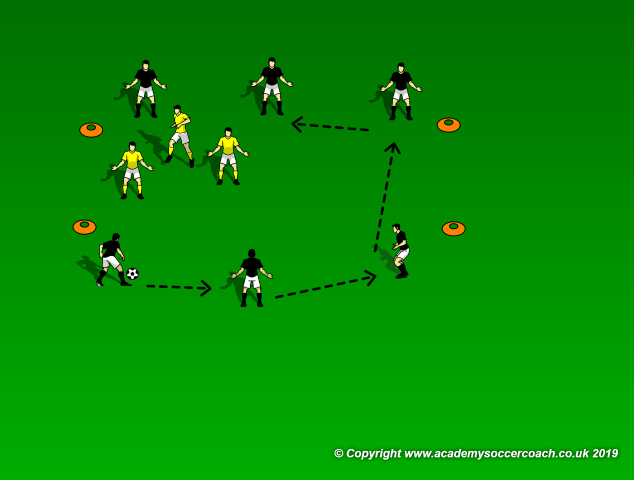 As shown above, set up a 20-30 yd wide by 10-15 yd deep grid. 3 defenders ( yellow ) work inside the grid to prevent the 6 attackers in two groups of three ( as shown ) from splitting them with a pass. Switching around the outside is fine ( as shown ) but the attackers are looking for chances to split the defending players. Defending players must stay inside the grid, attacking players must stay outside. Each group is inside for 1 minute and will then switch UNLESS a split is made. Every time the defending group gets split, they stay in 1 minute more. 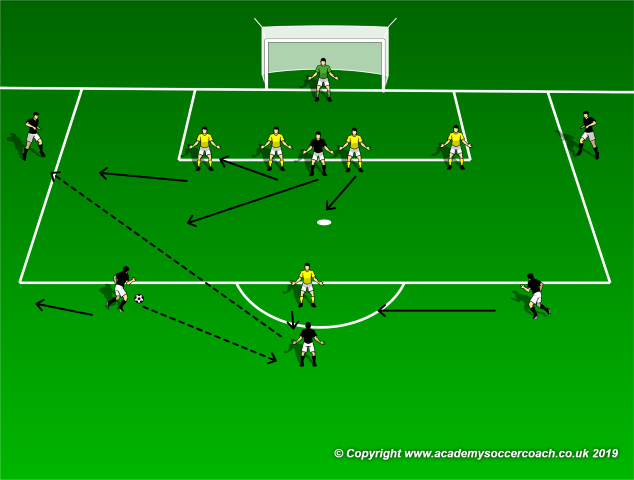 Next, move to the penalty box and play 6 attackers against 5 defenders and a keeper. Just outside the top of the box, 3 attackers play against 1 defender. All players must stay in their areas but may rotate between attempts. There is a free attacker on each edge of the box to simulate the open wide player. Inside the box, 4 defenders shift to avoid being split, but must contend with one designated striker. Play starts with the group of attackers at the top of the box who must make at least one pass with in their group before either hitting a wide player. The goal is to use the width to open up central space, as shown below. 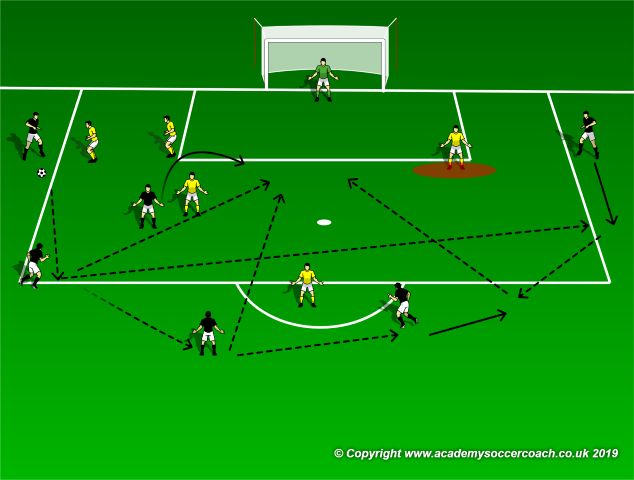 Once the initial outlet is made, most players will shift over. However, IF a defender lags a bit for fear of a big switch, the remaining players should look to exploit the space in the center. The lagging defender is marked in red above and the dashed lines show several passing options to exploit the central space. All attacking players may shoot once a wide player has received the ball and made one pass. IF the defenders get the ball, they must make 5 passes in the box and then hit their target player at the top of the box to score. Attackers can make the long switch and keep possession until a central chance develops.

Coaching Points
Different groups of attackers and defenders may rotate in, or this can be run at both ends of the field to accommodate a full side of players. The coach should make sure the attackers are not forcing play but using the wide players to open up the middle. Obviously any time there is a central gap for a through ball, the attackers should practice taking it. While this is an attacking based practice, the coach should encourage the defenders to stay tight and shift together to prevent opening up central space. If your team already switches the ball well and can cross at will, adding the “fake” to your system will create more opportunities at the feet of your strikers and make your attack virtually unstoppable.