What if your early service to the far post isn’t working? What if your opponent packs the box so full your players can’t find the combinations on the ground? What if your players who are usually good in the air are marked by players who know how to take that advantage away? What if time is running out and you need to make something happen? Most of us who have coached at least a season or two have encountered those games where an inferior team just sits in and clogs the box ,an equal or better team takes away the final pass or chances from services in the air or the clock is just running out and nothing else has worked. When this happens, don’t be afraid to probe the middle ground with some waist high services in the box.

The fact is, a ball coming in around the waist is a nightmare for a defender to deal with, especially in the penalty area where a hand ball is always a concern. I don’t think I would ever run a system based on scoring from waist high crosses, however I never fail to spend a couple sessions each season working on these as it is a great tool to loosen up a defense and create some opportunities when more “ traditional” tactics fail. 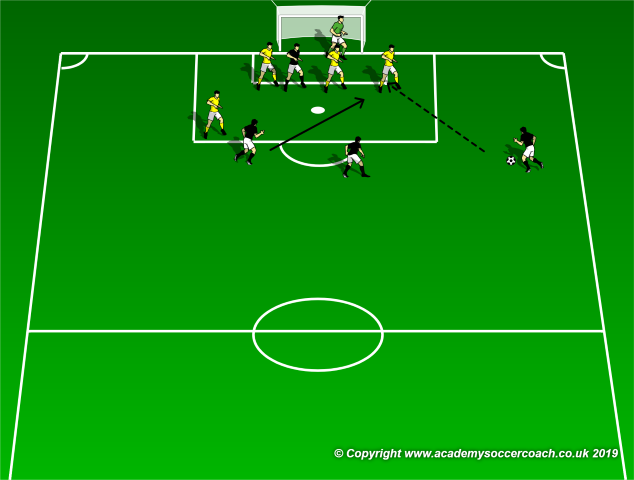 Trying to play on the ground here gives options for the defender to win the ball, play out, or at least make an accurate clearance. Play too high and the keeper is making the catch, and again, playing out. A waist high service on the other hand brings a hand ball into play, perhaps forces the defender to turn and avoid frontal contact creating a deflection and at worst makes the possibility of a clean clearance unlikely with a corner being a legitimate result. Not to mention a right footed attacker coming in has a chance to redirect on a volley which could go in or cause more problems.

Set Up
This is not just sending a 100 mph rocket into the box and hoping, this is a purposeful service targeting the most awkward area for a defender to win the ball in. The first step is to identify those players who can play the waist high ball accurately. 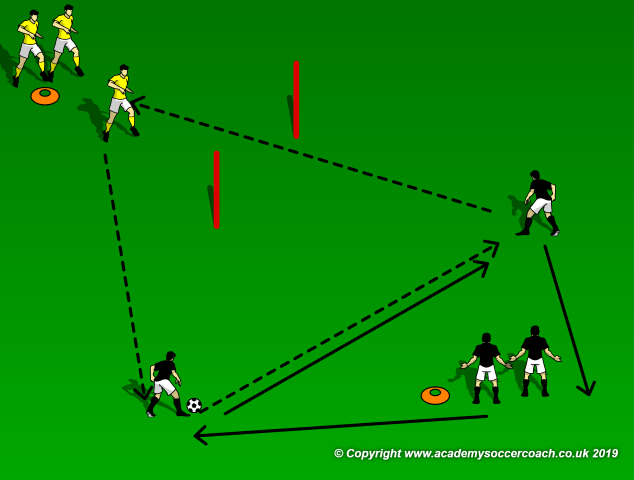 As shown above, set up a gate to use as a reference for the proper height of the service. Have a group of attackers receive a pass then send the ball through the gate to a defending player around waist high. This will also give your defenders a chance to work at dealing with these difficult services. Play starts with an attacker passing the ball to the serving attacker and following their pass. A new attacking player steps in to receive the ball back from the defender and keep the flow going. The serving attacker makes the waist high service and then drops into the attacking line. Defenders rotate in and out as well. 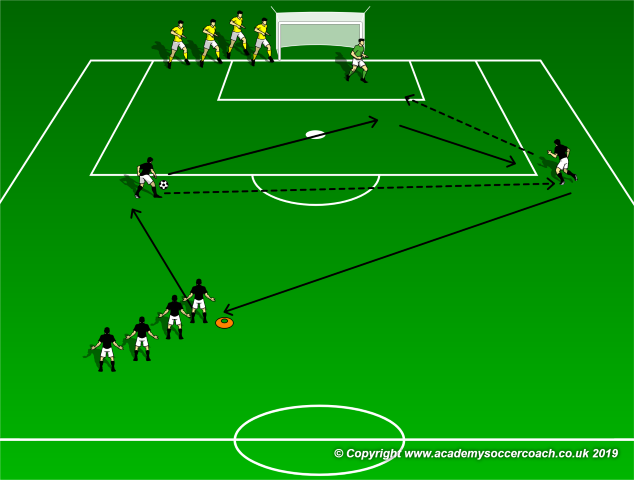 Now, set up at the top of the box and give the attackers a chance to volley a waist high service on the fly to the keeper. As shown above, one attacker passes the ball across the top of the box to the serving player then sprints in to volley the shot. The shooting player then drops off immediately to become the server and the server drops into the rotation. The keeper can roll out the ball to the next attacker to keep the play fluid. Once the attackers are in a flow, send in a defender to challenge the service with the goal of the attacker now becoming to force the attacker into a mistake or poor clearance for a corner kick if the attacker cannot make the volley. The first attacker and supporting attackers should all be ready to play the second ball here. Continue to add players until it is a 4 v 6 drill inside the box.

Coaching Points
The coach should focus the attackers on forcing the defenders into mistakes both with the awkward service and the pressure from the attack. This is not perfection here, it is raw aggression. Accurate services, aggressive runs, one touch volleys, forcing poor defensive touches just creating mayhem in front of the net.