Arsenal allow City to attack down the left; tempt Kolarov forward and use his space to counter via Sanchez

Arsenal expects that Man City will use Kolarov down the left, so Alexis Sanchez is not to track back. Instead, Mikel Arteta will shift over and cover the space with Debuchy. When City attack centrally, Arsenal will tease City to playing to the left side when Kolarov is deep, to entice him to get forward and into a crossing position. When the cross is dealt with, Arsenal instantly look for Sanchez in Kolarov’s zone, knowing that nobody is quick enough to catch him on the break.

Sanogo will play close to the right side so that Sanchez has someone to help him, and to help create space. With these 2 on the right, Ramsey, Cazorla and Wilshere can all rotate positions.

Push Debuchy high and get players between the lines; Leave left side for rotations

When in organized possession, Debuchy will always look to play high and stretch the width of the field, with Gibbs in a deeper role on the opposite side to make a back 3 in transition.

As Debuchy gets high, Arsenal will have Sanogo on the last line on the right side, Sanchez inside right between the lines, with Cazorla and Ramsey dropping deep then drifting between the lines from deep or from the left side.

As Ramsey, Wilshere and Cazorla are all comfortable in this zone, they all rotate positions to make it difficult to be marked or tracked on the left side. Arteta will stay deep and screen the defence to maintain the 3v2 advantage in central midfield. 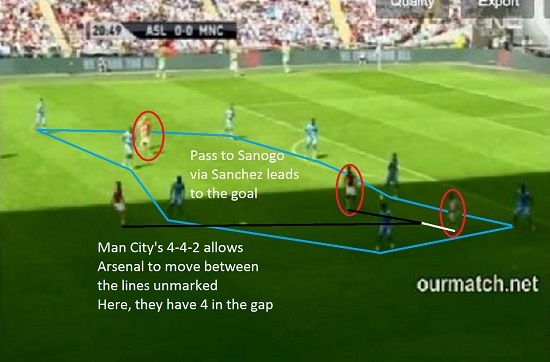 For the 1st goal, Cazorla and Wilshere are inside left, while Sanogo and Sanchez are in the places they are intended to be, with Debuchy high and out of image. Ramsey feeds the pass into Sanchez who passes 1st time to Sanogo who drops off from his marker. 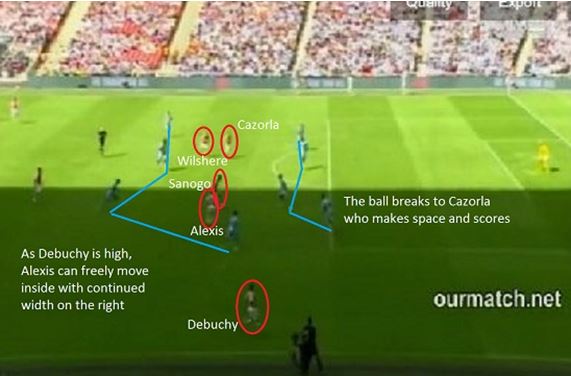 The ball breaks from Sanogo to Cazorla, who fakes to shoot with the right, lets it run across his body before shooting with his left foot from 20m.

As Arsenal win possession, they instantly look for Sanchez who has half the field available to attack as Kolarov is still recovering from the previous attack. Arsenal have players between the lines as the midfield 2 are flat in transition with the back 4 dropping off, worried about the space behind them. 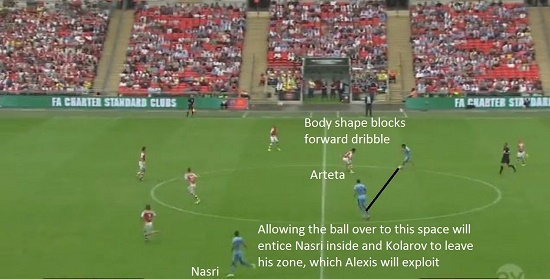 Arteta closes down the space but doesn’t try to force play towards Gibbs. Instead, he lets the ball go to his left, as the back 4 get into position. 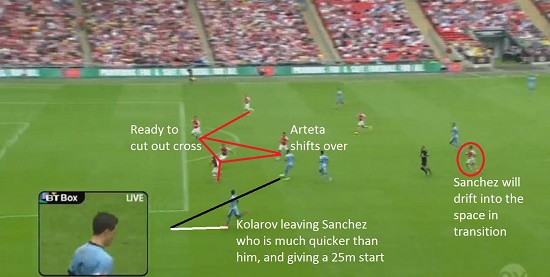 As the ball is passed wide to Nasri, he wants to drift inside while Kolarov can’t resist getting forward despite Sanchez having broke away on the counter attack several times previously.

Sanchez half-tracks back as he is supposed to do, and stays in a position where he can be found from the defence when the cross is cut out. 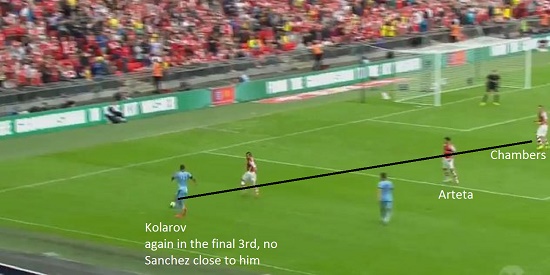 Kolarov is again in the final 3rd, which is fine if you are able to cover his space which Sanchez keeps exploiting. They don’t place someone in his position for the transition, and again Sanchez can break.

Sanchez receives a great pass from Chambers from Kolarov’s cross. City’s midfield don’t cover the spaces around the edge of the box, while nobody is near Sanchez in transition, which gives him space to run into again. 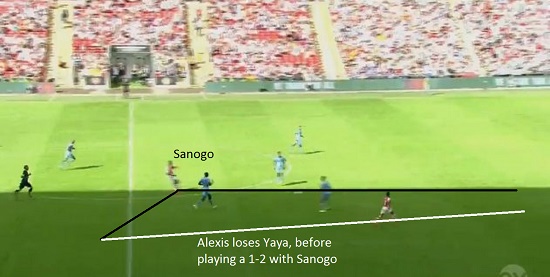 Sanchez plays the 1-2 with Sanogo but the pass is poor and the chance is lost. 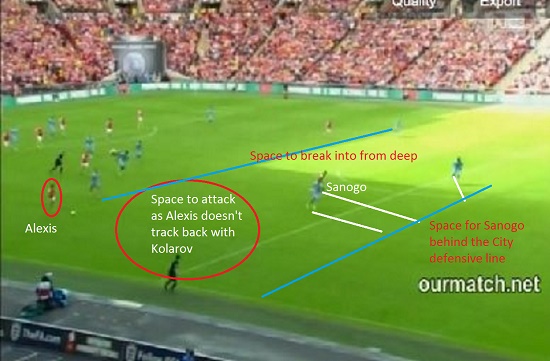 Kolarov is again tempted forward, despite several warnings, while City still don’t change roles in transition. As the ball is regained Arsenal instantly find Sanchez on the right again, he drives forward into the space and allows Sanogo to get into the same line as the defence. As he makes the run, the right CB drifts over to help, creating a gap for anyone running from deep.

Ramsey’s run into the gap created by Sanogo’s run 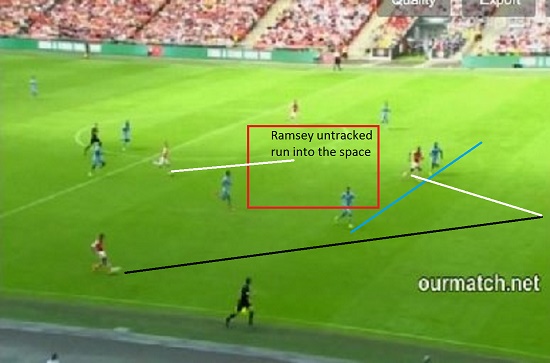 Sanchez releases the ball behind the defense, dragging his marker with him. 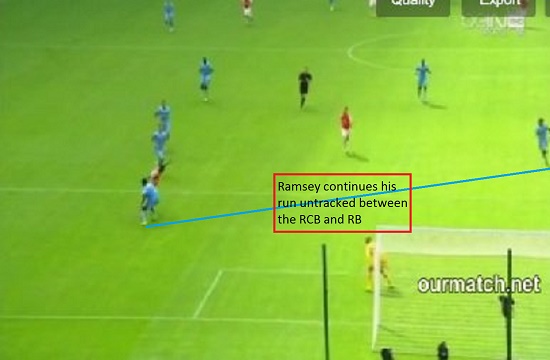 As Sanogo drags his marker away from Ramseys perfectly timed run, Sanogo brushes off the challenge before releasing to Ramsey who chips the ball away from the challenge from the recovering defender before smashing the 2nd goal into the far corner. 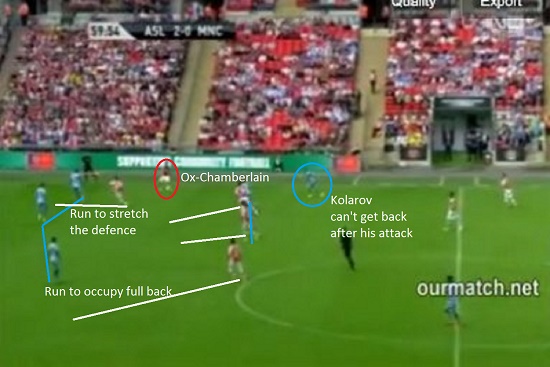 After Kolarov gets forward to attack, he can’t get back into position, so Arsenal try to get the ball in there as quickly as possible. Arsenal also look to get in the gap between the lines as Cazorla pulls wide which occupies the full back, and stops him from moving into the space to press. 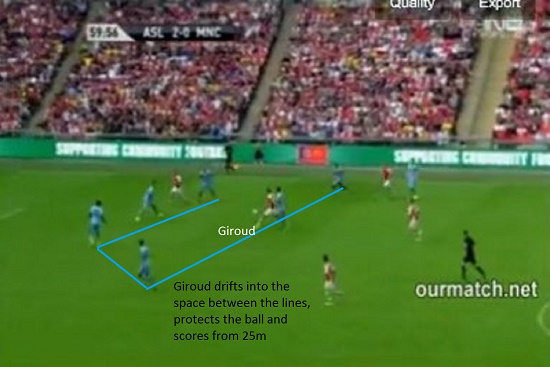 As the ball is passed inside, Giroud protects the ball before setting it to shoot from 25m.

In this game, Arsene Wenger was tactically excellent, while Manuel Pellegrini would say that he didn’t have his best 11 playing, tactically they didn’t deal with any of the threats Arsenal were quite clearly using over and over again. Had Pellegrini asked Fernando to play in the zone of Sanchez in and out of possession, and maybe asked Kolarov to not support the attack, the 3-0 defeat may have been prevented as it could have been much more for Arsenal.