By the time this match came around, Chelsea had already begun their championship run at high speed, 19 points from a possible 21 and already five steps ahead of trailing Manchester City. Arsenal, on-the-other-hand, were facing their rival while trying to forget the humiliation of last season. However, this was not your father’s Chelsea-side and the Gunners found-out quickly that this José Mourinho ran unit just does not play in the same way. Less predictable and stronger in all areas of the game, they were consistent in how they bagged the three points.

There were no surprises in the starting eleven for the Blues in this match. Jose Mourinho extended his usual 4-2-3-1 keeping the holders present on the lawn of Stamford Bridge. Only one position would have been questionable: who would slide into the wide attacking role on the right, which was Schürrle, starting alongside Hazard and Oscar in support of Diego Costa.

On the opposite side, Arsene Wenger had to deal with the absence of Arteta and Ramsey, as well as the continued loss of Debuchy and Giroud, both of whom were injured a few weeks ago. To counter their rivals and to deal with Fabregas, the Gunners employed a 4-1-4-1. Flamini moved to defence and supporting the efforts of Wilshere and Cazorla in midfield.

Being that they were completely dismantled by Chelsea last season from the outset, the Gunners did fare much better in this match. The 4-1-4-1 implemented by Wenger, kept Wilshere and Cazorla matched-up with Fabregas and Matic. As soon as the Chelsea duo approached the midline, they would find themselves immediately under pressure, while Flamini provided cover to help deal with the movements of Oscar.

Faced with this first dense curtain, Chelsea lacked solutions to be able to cross the midline. The long game was a first option, either forward into space or directly to Diego Costa. However, as the minutes ticked by, Matic gained importance in the midfield. He was able to direct the game from there; even when failing to find solutions in front of him, he would instead spray the ball wide. 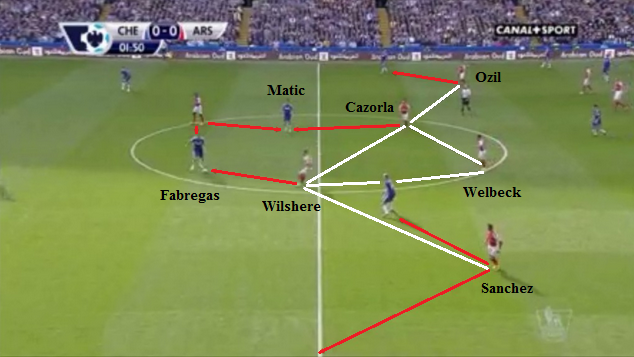 Arsenal looks to Cazorla and Wilshere to slow-up Matic and Fabregas, while Welbeck offers support. Sanchez and Ozil are also in good positions to help from their locations wide.

Probably to test the youngster on the right side opposite Hazard (Chambers), Chelsea was insistent on attacking down the left. The Blues enjoyed a good rate of ball possession early in the match, yet they fail to truly worry the Arsenal defence nor even spend much time in the final third.

In reality, Arsene Wenger’s men are the first to cause ruckus in the final third. The combination Mertesacker-Koscielny-Flamini had their hands full dealing with Oscar and Diego Costa, while Wilshere makes himself available in the midfield.

Outside of that initial thrust, however, Chelsea regained control of the match quite effectively. Özil and Sanchez took back control of the midfield, while Oscar assisted Matic and Fabregas in support of Diego Costa. 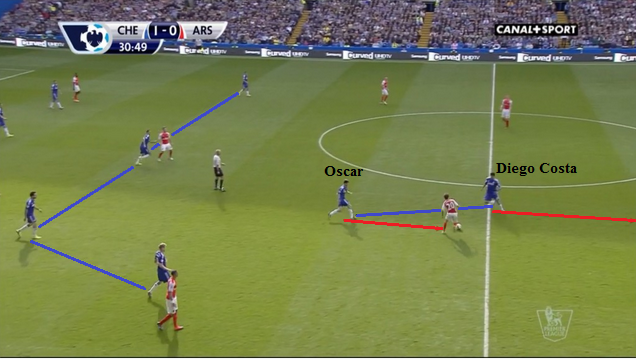 Chelsea, in their 4-4-1-1, look to work with Oscar and Diego Costa up high. You can see their two lines of defending behind their stacked striker set.

For the first quarter of an hour, neither side was able to create any real chances and both defences were left spoilt for something to do. The majority of the play had been taking place in the midfield and what would be needed to change this is the ability of one team to adjust their attacking approach.

Chelsea answered the call and made the needed adaptations to what was an otherwise monotonous animation. Hazard become important in his side’s gaining a grip on this match. Blocked off from any progressions down the left side, the Belgian try to make himself available by sliding into the centre of the park. Supported by Flamini centrally, Ivanovic in recovery and Matic and Fabregas wherever needed Hazard fetches the penalty that allows him to open the scoring in the 26th minute. 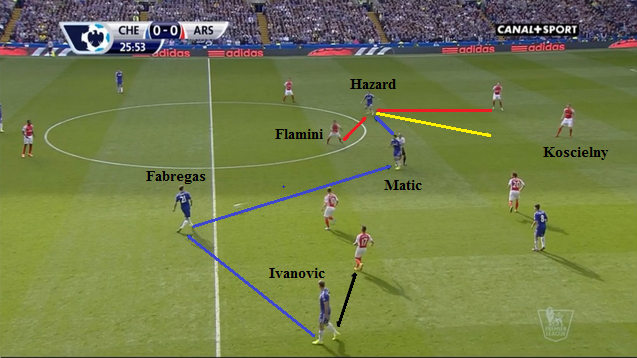 In this case, Ivanovic’s higher recovery run does two things: first, Fabregas is not yet pressed forward level with Matic making Matic an option for him and second, Hazard is now naturally open and able to swing in the half-space. Within two-passes, (Fabregas to Matic and Matic to Hazard) Hazard will be able to release the ball in towards goal and Flamini is too high up to intervene and prevent the oncoming duel with Koscielny.

When Hazard enters the centre of the pitch, his movement is compensated by Oscar, who finds himself out wide on the left-flank. The versatility of the Brazilian is a real asset, especially in the second half when Schürrle took his turn running the pivot to support Diego Costa.

With Chelsea maintaining possession for most of the second half, Arsène Wenger’s men did not have many opportunities. Their most clear chance came from a mid-distance shot off the boot of Cazorla, which ended a few inches from the left Peter Cech in the 50th minute. Chelsea tightened up their two lines of defence tightly around their penalty area, only leaving spaces 25 meters from their own goal. 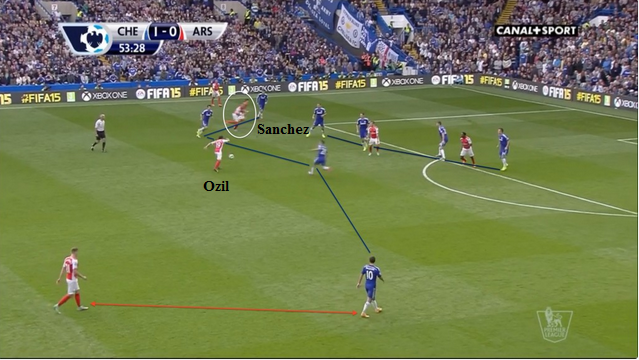 Able to retain the ball a bit more, Arsenal managed to push Chelsea back a bit. However, the Gunners were still unable to find open spaces of which to exploit.

This match just confirmed what the first day of the season suggested: Chelsea is just not boxing in the same weight-class as others this season. They are already well established and are riding on the work done last season by their coach. The 4-2-3-1 alignment offers a wide range of options, both offensive and defensive, without any sort of unbalance to the whole.

Wenger’s decision to deploy Cazorla and Wilshere in midfield to counter Matic and Fabregas worked initially but it was quickly destabilized once Hazard began to pinch inside. Not only forced to chase the game, the Gunners were also forced to face the opposing defensive unit as well their current limitations such as their lack of width in the offensive phase, very little change of pace for Özil and Sanchez and significant absences during play from Arteta, Ramsey and Giroud.

…Chelsea’s control of the midfield, their versatility, Mourinho’s micro coaching and perhaps even a bit of disappointment on behalf of Arsenal tossed in all led to How The Match Was Won!