Positioning in modern football is a massive part of the success of a team, particularly in the development of an attacking game but also in ball conservation to defend, while defensive positioning has always been an important factor in a successful defensive unit. With Pep Guardiola (of whom regular blog readers will know I analyse his teams on a regular basis), his tactical innovations are changing the way the game is played and coached across all levels.

The full backs of Bayern – Alaba and Lahm – can both be played in central midfield and at full back in both attacking and defensive phases. This gives Guardiola so many more options but instead of being a traditional coach and using players in traditional roles, he has created a hybrid position for these players – an ‘inverted Full Back’ role, where in defensive phases, they retreat to defend the sides like regular full backs, but can also stay centrally to cover behind the counter-press, able to cover more zones from a position in the ‘channel’ as opposed to from the touchline.

This works on the basis that you have less attacking and defensive movement areas from the touchline. Instead, playing these players in the channel as hybrid central midfielders and full backs where they can move inside and impact the game in all 4 phases, while being able to cover both the middle and sides with a quick 15m sprint gives Bayern many more movement options.

In this example, Alaba and Lahm help overload the centre 4v3 as Bayern move from a 4-2-3-1 to a 2-4-2-2/2-2-4-2 means that Bayern can cover more zones and keep the team compact in both attack and defensive phases.

When the ball is lost, Bayern counter-press leaving Alaba and Lahm to cover behind the press as it is forced into the centre, but if play escapes the press to the side, they are mobile enough to shift over and cover the spaces on the sides.

Positioning Across The Field – Covering each Vertical Zone, Horizontally 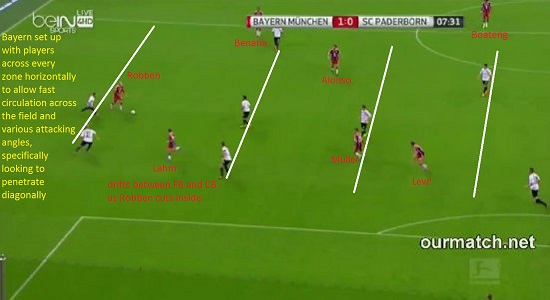 When in possession, each player has a ‘playing group’ of 2-4 players.

For example; Robben, Rafinha, Lahm on the right, Alonso, Lahm, Alaba in the centre and Alaba, Goetze and Bernat on the left.

Positioning to penetrate to attack the back 4 from midfield 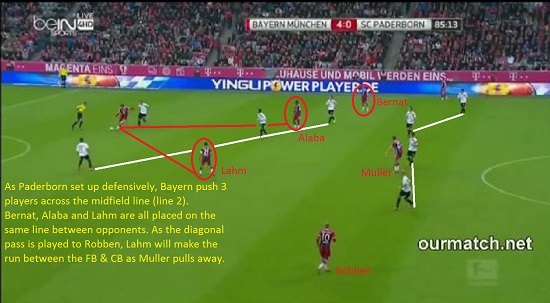 As Alonso is deepest of the midfield triangle, both Lahm and Alaba are between opponents on line 2, with Bernat on the outside of the midfield line. The positioning of these 3 players is key to breaking through the midfield line, as any pass which is received on the half turn can allow for the next pass to go through the back 4 if the movement ahead is on time, while if a switch of play is made, Lahm and Alaba are in good supporting positions to run ahead of or around the defensive line.

Movement to offer and attack a cutback 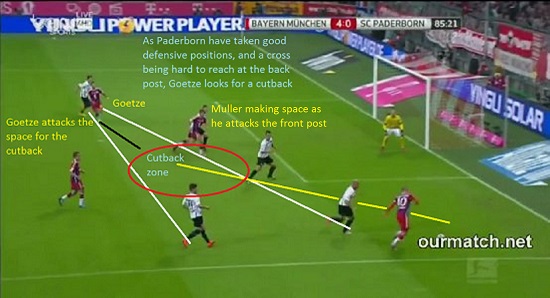 Crossing is often unsuccessful and leaves you open to a quick counter attack if the GK is quick in releasing the ball after a catch. A good way to score without the risk of the counter attack is to make cutbacks while the back 4 are running back, facing their own goal.

Here, Goetze recognises that Robben likely won’t cross to the space at the back post as Muller is on his way to the front post, while the cutback angle is available between the centre backs as the near post defender covers the front zone. We can see by Goetze’s body shape that he is already on the run and expects Robben to make a cutback.

Alonso is the deep player in the midfield triangle of the 4-3-3, or even when there is a 3-3-3-1, he will often fill into the back 4 or fill in to create a back 3, or even make a back 5 when needed. In this instance, Schalke have gained ground and picked up good positions between the lines infront of the defence. As there are 3 players between the lines in the central zone, Alonso fills into the defensive line and form a situational back 5.

The key to this is that each player has an opposition player of whom they have to play against 1v1, 3v3/5v3 in the centre and 1v1 on the outsides. The CMs who are deep have to press from behind and cover the space infront of the player in possession, while blocking any penetration opportunities whilst maintaining a clear defensive line to ensure the team can hold positions to halt the progress of the runners who can be caught offside.