Perhaps fortune does favor the brave, but the Champions League favors solidarity. One of the most recent latest editions have once again reminded us of this; that whatever the initial game plan is the most organized and cohesive team is usually the one that finally triumphs. Arsenal suffered a painful wakeup call in the face of Monaco who gained confidence as the minutes ticked and their solidarity was made evidence via their great accuracy with the ball.

Possession of the ball, more specifically and Leonardo Jardim's men were looking primarily to Dimitar Berbatov to ensure that occurred. Always smart in his movements, the Bulgarian would call for the ball from width, usually finding seams on the back-side in attack.

Here is how I thought this particular player affected the outcome of this match. What are your thoughts? Please let me know what you think in the comments section below.

Dimitar Berbatov’s role was to play out of the pressure applied by Koscielny and Mertesacker, then play the ball in behind for teammates. Moutinho was obviously a priority target for him. The success of this first pass from Berbatov was the key to success for Monaco: when the Bulgarian could pull the chain after his first touch, he negated the effect of Arsenal’s defensive block, opening up spaces wide for both Fabinho and Dirar, but also wide on the opposite flank as well.

Each time Monaco would enter Arsenal’s half, Berbatov continued his role of constantly picking opportunities to supply options to his teammates. 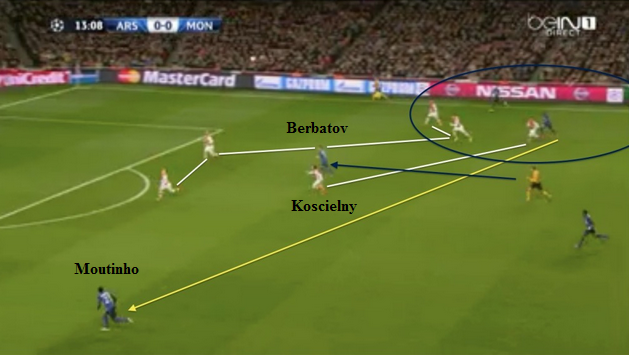 Berbatov was consistently unbalancing the Arsenal defense with his movements. He slips from a 3 vs. 3 situation (in the blue zone) into an open seam centrally which causes Koscielny to drop inside to pick him up. This opens up Moutinho on the far side with plenty of space to work. 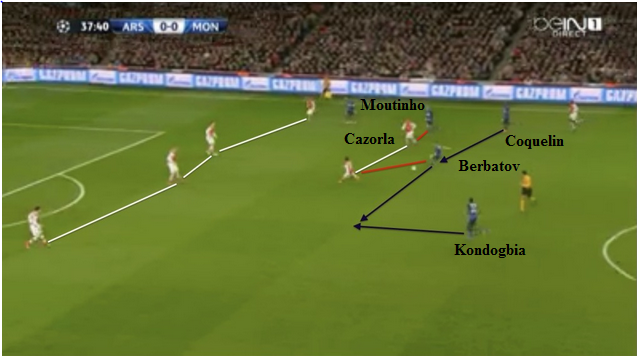 Here we see the Arsenal defense in place, but this time it is their midfield that Berbatov throws off-kilter. Coquelin finds him in a gap within the Arsenal midfield and because Cazorla is locked-up with Moutinho, he instead goes to Kondogbia who tries his luck from range.

Beyond the simple game Monaco was trying to play, Berbatov highlighted the main weaknesses of Arsenal: their lack of rigor and the unwillingness of their attackers to defend. Upon pressing, the Gunners left too much space to their opponents. 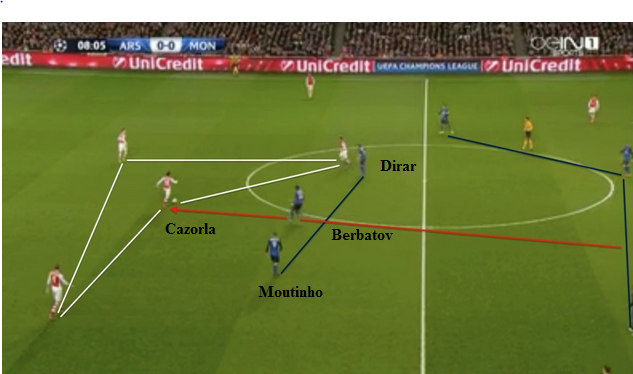 Berbatov was also a nuisance on the defensive side as well. Here, with Cazorla in possession, Berbatov applies pressure knowing that he has support from Moutinho on his left and Dirar on his inside right. This slows down the Gunners game emphatically.

Usually in these situations, the key man for Arsenal is Mesut Özil. However, the activity of Berbatov forced the preoccupation of Koscielny and Mertesacker which left Kondogbia and Fabinho tremendous amounts of space between the Arsenal lines. Yet again, it was Berbatov who was needed to make it available. In one span of three to five minutes he connected 10 passes of 5 meters or more; another illustration of the effectiveness of Monaco who was able to control the rhythm against the Londoners. 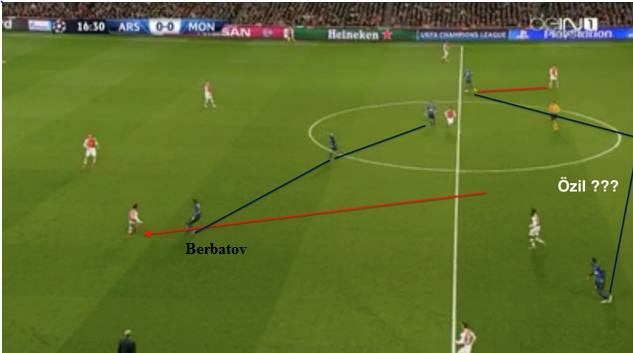 The intensity and precision at which Berbatov closed down opponents would at times leave spaces that could’ve been exploited by Ozil in the heart of the pitch. However, the German was never able to take advantage.

After the break the Londoners did offer a better showing of themselves. Faced with an English team more determined than in the first half, Monaco was finally put under pressure for extensive periods of time. Similar to the role of Giroud for Mourinho, Berbatov came back to support during these long sequences of Arsenal possession. What this did was lend a hand to Fabinho who was responsible turning around possession following recovery of the ball. With the Belgian recovering back, Moutinho could step-out ahead when possession was regained. 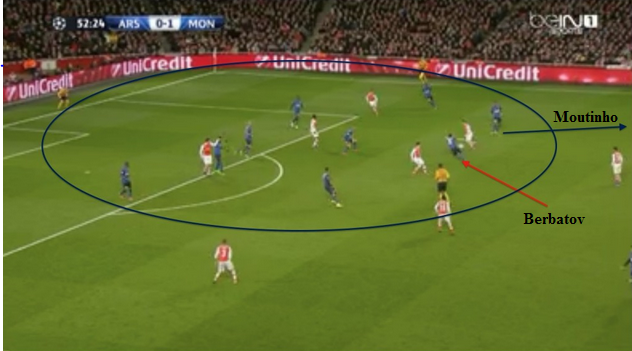 Berbatov recovers to defend ball-side. This releases Moutinho wide to become the primary outlet once possession is regained.

…Dimitar Berbatov’s work on both sides of the ball was an integral piece to How The Match Was Won!

I would love to hear your thoughts about this. Let us discuss it below in the comments section.