To some, it is nothing more than just an over-hyped friendly. To others, it is the first official match of the season. Regardless of which camp you fall into, the Community Shield is an occasion that always gets us excited about the new season.

Many players were still working their way towards match fitness and there were still many missing due to injury; Manuel Pellegrini was without some key members especially in defence while Arsene Wenger on the other hand was crucially without his World Cup winning German contingent. Wenger did however, pick a strong side featuring 3 of his new signings including Alexis and Debuchy, who both started on the right and formed an impressive combination through the match.

Here is what I thought were the key tactical pieces that gave Arsenal this opening match victory. What are your thoughts? Please let me know what you think and what other tactics you think were a factor in this match in the comments section below.

Arsene Wenger started his side in a 4-3-2-1 system. He lined up Arteta, Wilshere and Ramsey in a horizontal line across the middle of the park. Even Cazorla and Sanchez, who were just ahead of the midfielders, were playing narrow, rather than as wide men. When transitioning to defence, they would fall back into two banks of four. 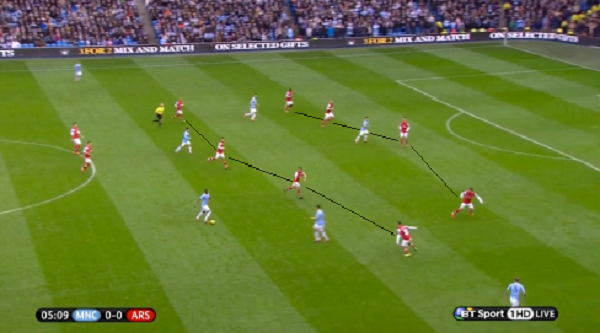 The width was coming from on rushing outside backs. Essentially, the purpose it served was that it allowed Arsenal to have bodies in the midfield region and dominate that area. Arsenal, as a team, played a number of short passes and always had men close to the ball, ready to receive it, especially in the midfield area. This ensured that the Gunners could move the City defense around and dominate them to create space for the outside backs coming forward. 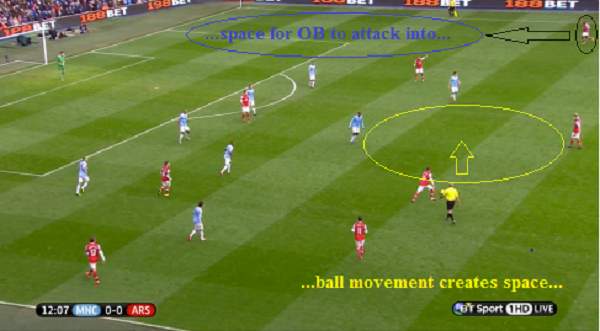 The key was the positioning and the movement of each player in the midfield zone.

Sanogo served as an excellent target man, dropping deep when required to collect the ball, or serve as a bouncing pad and making runs in behind to stretch the defence when the game got a little too compressed for the Arsenal midfielders. The goal Aaron Ramsey scored was after such a run, with Alexis finding Sanogo in space. Alexis also played very well. The Chilean was not really a winger nor was he in the central position. He was found frequently in the channel between the centre back and outside back, in the space between defense and midfield.

This made him very difficult to mark and pick up, with Kolarov in particular struggling to contain him. The movement allowed him to find space, make passes and drag the defence out of position for others to make runs. 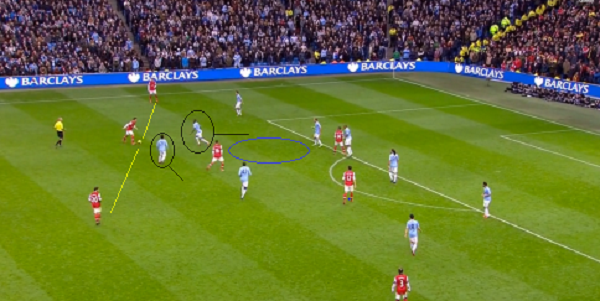 Essentially, the purpose of all this passing was to create space on the wings for the two outside backs, Debuchy and Gibbs to run into. The combination of Debuchy and Sanchez in particular was very effective. The Chilean stayed narrow, dragged his marker, Kolarov inside and created a lot of space for Debuchy. A similar thing happened on the left hand side, with Cazorla managing to bring Clichy inside and create space for Gibbs. 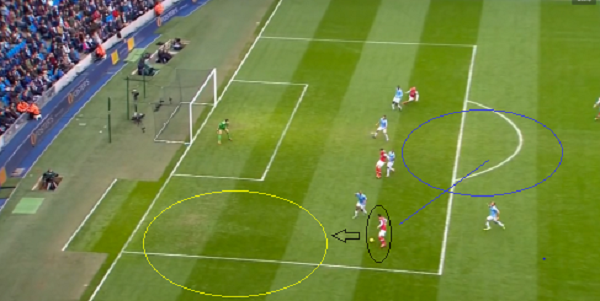 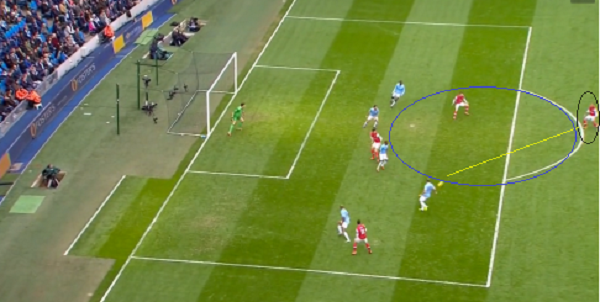 While Arsenal was enjoying a thorough dominance through the centre of the park, Manchester City was in turn finding it rather difficult to make way through this area of the pitch. 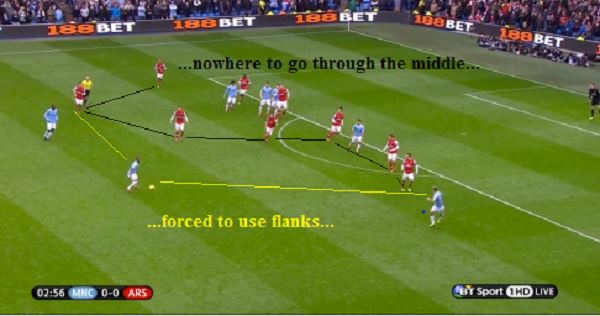 Generally, with the likes of Silva and Toure in the side, they dominate the central areas and direct play from there. However, faced with a 3-man midfield, of whom Arteta was a lot more defensive; City struggled to find any link between their defence and their attack. The Premier League champions were really struggling to translate ball possession into meaningful ventures into the opposition half. Jovetic, who began the game in a central position was largely neutralised by the nagging presence of Mikel Arteta. Nasri, the playmaker with Silva absent, was operating in the wide areas. As a result, City was forced to try to build their play down the flanks. This was a very reactive game plan, as they looked to take advantage of Debuchy’s runs down the right to try to capitalise on the space he left behind.

Here we see City getting in behind down Arsenal’s left side: 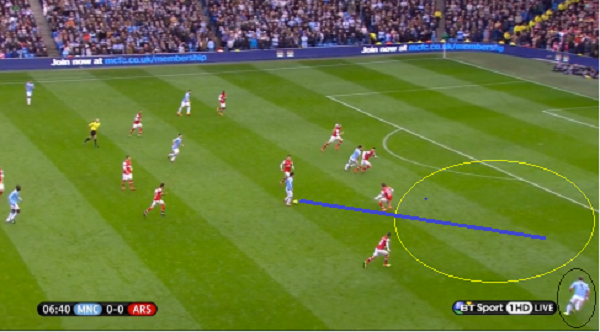 This improved largely in the second half, as David Silva came on for Nasri. The majestic Spaniard immediately made an impact, as he began dropping into pockets of space and moving around more. He worked combinations with Toure and made City more cohesive going forward. Of course, they still found it difficult to hurt the Arsenal back line, but it was an improvement on what was seen earlier in the match, especially in the first half. Many of City’s forays forward ended up up in them getting to the wide areas and in decent positions to make cutbacks, but the Arsenal defenders had the angles well covered.

Both managers have said very different things about this match. Pellegrini will praise the effort and stress the fact that this is essentially a glorified friendly. Wenger, on the other-hand, will tell his lads that this is the evidence they need and that they have what it takes to beat the big boys. Arsenal performed very well and showed some glimpses of their ability. City certainly is not up to speed, but they will need to wake up quickly. When they do, they are going to be a dangerous force and surely among the favourites to win the league (along with their victorious opponents).

…but, on this day it was Arsenal’s work in the middle that ended up being How The Match Was Won!