This article works on the anaerobic endurance of the right or left back in an attacking situation. Overlapping is something that is extremely important for a right or left back to be able to do because their role is not only to defend, but also to attack when the opportunity arises. Figure 1 below shows the set-up of the exercise.

A 10x10 square is set up around 25 yards from the end line out on the right hand side of the field and. This is where the exercise will start with a 1v1. A second attacker starts around 10 yards behind the 1v1 square and sprints forward into the square to support their team mate. This creates a 2v1 with an overlapping run (figure 2).

The idea is that the ball is passed to the full back on the overlap, who then dribbles out of the square. Once the right back dribbles out of the square, the defender is not allowed to track back and pressure the right back. While this happens in the 10x10 square, the 3rd attacker that starts around 25 yards out makes a run towards the cone on the edge of the 18 yard box (figure 3).

The attacker who initially started the 1v1 now attacks the back post. Once the right back has dribbled out of the square they dribble to the right hand right of the box and will have two attackers to aim for, one making a run to the back post and the attacker who ran towards the small cones on the edge of the 18 yard box who will now attack the front post (figure 4). When the attackers make their runs toward the front and back posts, it is important they sprint towards them in order to lose a defender that in a real game would be tracking them. 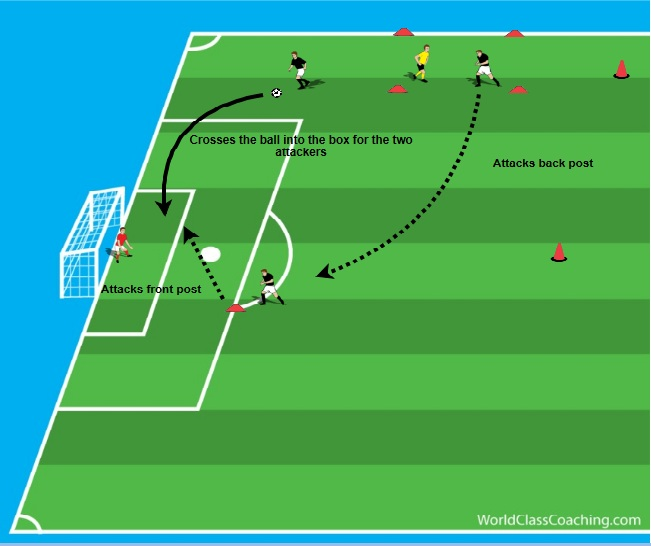 Progression:
To make this exercise more realistic you can add a defender in the 18 yard box who will now compete for the ball when it is crossed in (figure 5).

After the right back has made their overlapping run it is now even more important for that player to get their head up and see where the runs are being made and the positioning of the defender. By doing this, the cross can be aimed away from the defender and into the path of the attacker in the 18 yard box. Essentially, the exercise is set up in the same way with the same runs being made, but now with a little more pressure on the right back to deliver a good cross into the 18 yard box after their overlapping run (figure 6). 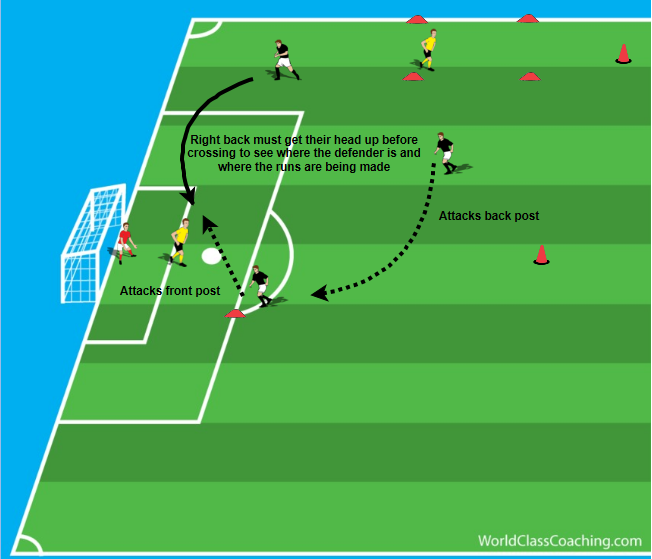 This exercise can get all of the players working very hard as there is a lot of sprinting involved. A point can be given to the full back for every time that they are able to pick out one of the attackers with their cross regardless whether a goal is scored at the end of it or not. The full back can also earn extra points if a goal is scored from their cross. It is important that the full back is able to cross the ball in well even after they are tired from sprinting forward to make their overlapping run. Another good way to progress this exercise and to put more pressure on the full back to deliver a good cross into the 18 yard box, is by allowing the defender in the 10x10 square to recover and try to win the ball back once the full back dribbles out of the square.