I am just as guilty as anyone for demanding my team follow a script. In my opinion if a team can load the middle, get the ball wide, get it forward and then across the goal, they will be successful. I use this approach as a foundation, but the fact is it is very limiting, especially for individual player development. One instance I see consistently at many levels is that players who play too “scripted” miss creative chances. This lesson looks at those times where a player penetrates the 18 going to goal, but instead of looking in for a 1 v 1 or quick assist they just play the ball wide to the corner. The fact is, IF they can keep the ball, they can look inside, and if there is no good chance, they can still send it out wide for the service, essentially creating a 2 for 1.

Set up a diamond with about 15 yds between the cones. At one side, drop in another cone to use as a turning point ( as shown). Three players rotate around counter clockwise after making the required run, dribble or pass. The player starting with the ball sends it across to the player nearest the turning cone. The starting player then bends their run away to the next cone. At the same time, the off ball player bends their run toward the receiving players cone. The receiving player takes the ball, dribbles to the turning cone and then out towards the point of the diamond. There they pass the ball back to where they started,( and the off ball player is waiting to receive), and the drill becomes fluid. The player who initially receives the ball bends their run away to the initial starting point after passing. The exercise can be run fluidly for a set amount of time before restarting at the top of the diamond. 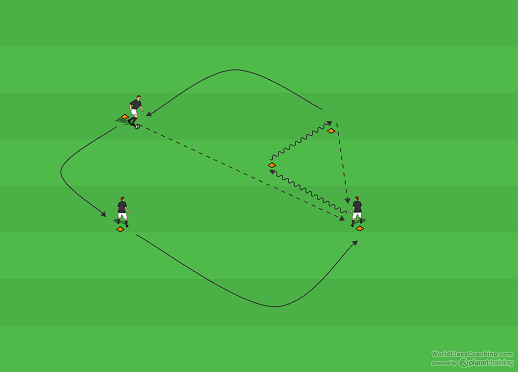 This is the warm up for things to come so coaches should focus on encouraging their players to use good touch, good passing, good run timing and controlled dribbling.

In the attacking third, set two lines of defenders on the end line at the 6 and 18 marks. A line of attackers is placed across the goal on the far side of the field, in line with the pk spot. A final line of attackers is set across the goal, on the field at the top of the attacking third. ( as shown ) This is a 2 v 2 drill to an open net. The defender on the 6 sends the ball to the attacker at the top of the attacking third. This defender and his supporting defender sprint across the try and pressure the attacker receiving the ball. The wide supporting attacker holds their position of support waiting to receive the ball and serve it in. IF the receiving attacker can beat the defenders in for a shot they should do so, if not, they should pass the ball out and attempt to finish the service. 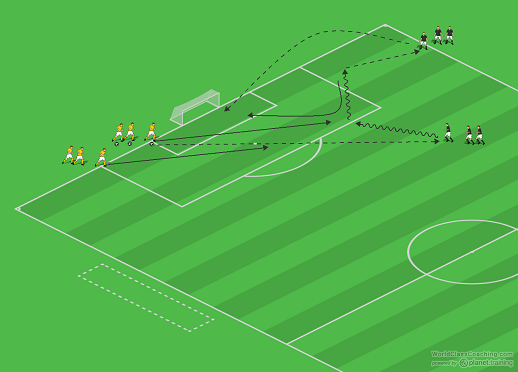 This is the 2 for 1 chance. The coach should focus the attacking player on looking for a good chance, but NOT to lose the ball without creating a chance for at least a service. While this is an attacking drill, the defenders can also be coached on approach angles and closing down.

Half field to goal, 3 v 3 plus a keeper. One attacker starts with the ball wide at the intersection of the half line and touch line. The ball is to be sent forward to the top of the attacking third where another attacker, who starts at the top of the center circle will receive and look for the 2 for 1 opportunity. The serving player runs the line for support after starting the activity. An additional attacker who is on the other side of the field makes a far post supporting run. Three defenders who start on the half line add pressure. Two should start on the opposite side of the field from the ball, but one should start in the center circle.  ( as shown ) The attackers and defenders all rotate in and out in groups of three. 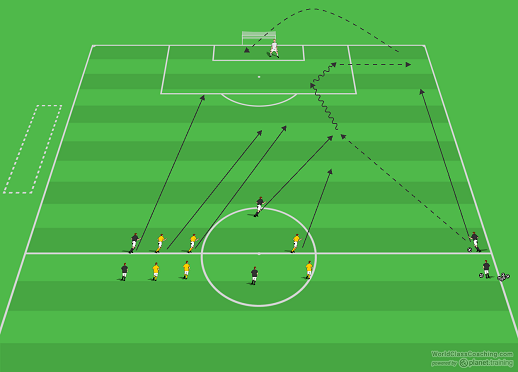 This should be a game speed exercise. The head start given the attackers can be taken away to add more pressure. The coach should look for game speed decisions and execution. Once the team has grasped the concept, scrimmage half field with two wide cone goals for the defense to counter on and see if the attacking players freely look for the 2 for 1 opportunities.