Question - I coach an U13 team in Mauritius. We are actually doing our pre season and have played two friendly games. We got beaten on both games 1-3. We created a lot of opportunities but we are not converting them. I spent some time working on playing from the back, possession with rondos or SSG. We play 8v8 and the team plays in 2-3-2. Are there specific shooting/finishing drills I should be working on.?

This is actually an issue many teams struggle with at some point, from the young team playing 8 v 8 which we are speaking of to more experienced teams at higher levels. Fortunately, the solution is usually not that complicated and the activities involved in making the fix are ones players love i.e., as far as problems go, needing to do better finishing off chances is a good one to have. Here are a few questions to ask in seeking the solution along with a couple activities which usually help sharpen up finishing:

1. Are the chances being created actual chances – where the shooter receives the ball 1 v 1 with the keeper or an open net or are they half chances – where the shooter receives the ball near shooting position but still has a bit of work to do to beat a defender in order to shoot?
Making a distinction between a chance and a half chance is important as if the opportunities
are half chances the solution may involve making an extra pass and/or getting another player or two involved.

2. Are the chances not being converted because a specific player or two are getting the shots just not able to find the net?
If the players are in position and have full chances, this is a timing, set up ( angles ) execution issue.

3. If there are multiple options available for the service, are the serving players selecting the best option?

During most created attacks, as opposed to breakaways ,etc…, there should be multiple options when the service is hit – generally a player on the front post to finish there or challenge the keeper, a player on the back post – the highest percentage shot if the ball gets across – and a player lurking around the top of the box. Depending on when and where the service is taken from, each of these options ( near post, far post, top of the box ) can be the highest or lowest percentage chances. For example: 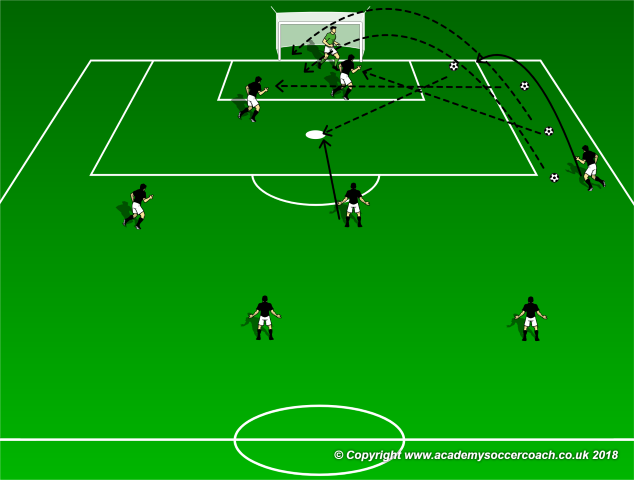 As the service comes in, there are different options which are the best. The above diagram shows these based on the different positions of the ball. For an early service, both the near post and far post are options, as well as a ball lobbed centrally in front of the keeper. Here, both forwards are well suited to make a play. ( Both forwards are also an option for services taken earlier , from say 30 or 40 yds out, as well )However, as the ball moves up, the near post becomes both the best option ( as shown by the second ball up from the top of the box ) and then a worse option as the keeper will move to the ball side of the goal. Then, obviously the far post is a better target. Finally, if the ball is served from the end line, the box will be packed and the actual best option is a drop back towards the PK spot. This is a simple, basic explanation of the need to make sure your serving player is getting the ball to the shooter with the highest percentage shot, which will help your conversion rate immensely.

If your services are getting to the right player, and the chances are definitely full chances, try these drills to help improve your players shot selection, timing and execution:

Set Up
Set up cones as shown below to demark the high percentage and low percentage shooting areas. Use one color ( orange below ) to extend the frame of the goal straight out. This is the highest percentage shooting area. From a different colored cone placed in the center of the goal ( yellow below ), extend two lines out toward the corners of the six and eighteen yard boxes. The areas outside these lines ( near post ) are the lowest percentage areas, the space between the two colored cone lines are the medium percentage areas. Have your players start with a ball in each area and take shots on the keeper, who must stay inside the goalie box. Shots should be taken with a quick forward push of the ball then a shot. Players can rotate around to each area. Start close in ( as shown ) and back the players up after each has been through the entire rotation. 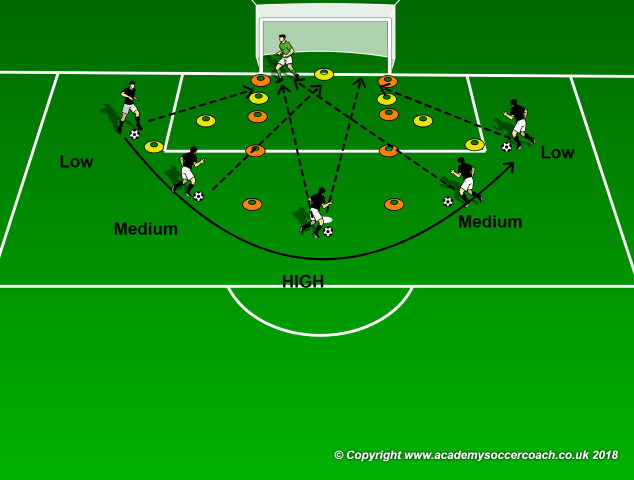 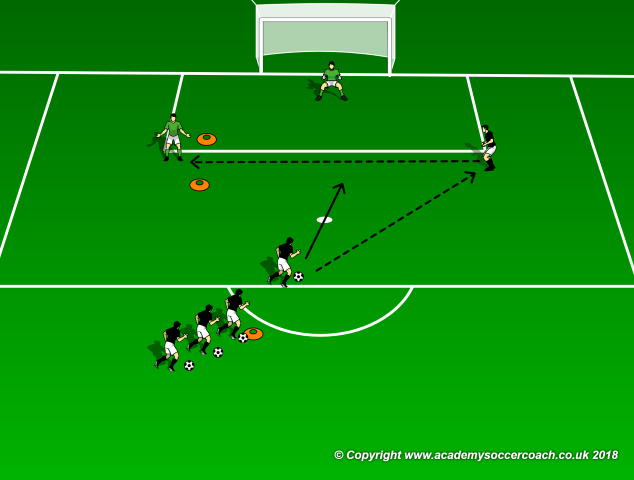 Set your team up as shown above, this drill will help with timing, body position ( set up )and ball striking – which are the main issues with finishing from an individual player stand point. As secondary issue is the weight of the pass – which this drill addresses as well. Keepers stay inside the goalie box, shooters start at the top of the 18 by passing a ball to the serving player at the top of the 6. This player sends a pass across to another keeper waiting at the other side of the goalie box ( as shown). After the shooter makes the initial pass, it is their job to intercept the service and shoot. Initially, the service should come in so the shooter can get there for the shot, but as the drill progresses, the services should become faster.

Progression
Back the shooters up and change the attack angles ( as referenced in the previous diagram and drill ) to progress this activity.

Coaching Points
These two activities will not only help the players sharpen up, but will also give the coach the chance to analyze specific players and any possible issues – set up, shot selection, placement of the surface of the foot to the correct part of the ball, timing, etc… The coach should use this opportunity to help their players “ dial in “ and improve their finishing percentages. Good luck!