The following activity adapts muscular force in soccer players. The activity begins with power jumping over hurdles, followed by a short acceleration to win a ball placed in the middle of the grid and then progressing into a 1 vs. 1 duel for short muscular intensive actions. The specific fitness target is intermittent endurance while adapting the player’s anaerobic capacity in a small sided group format. Although the repetitions are short lived, the rest between actions are incomplete therefore adapting the previous mentioned metabolic adaptations. 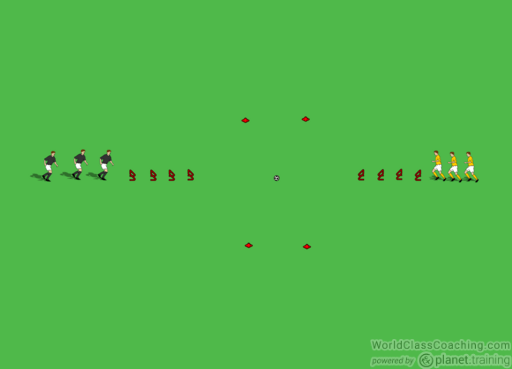 • Two lines of three players are set up on the field as shown in the diagram above.
• Initially, the first two players are waiting to hear the coach’s command.
• As the players set, the coach will yell or blow the whistle.
• Once the players here the signal, they will jump over the hurdles performing power movements.
• Whoever wins the ball first goes to score in either side goals by dribbling through them.
• Whoever is defending tries to win the ball. 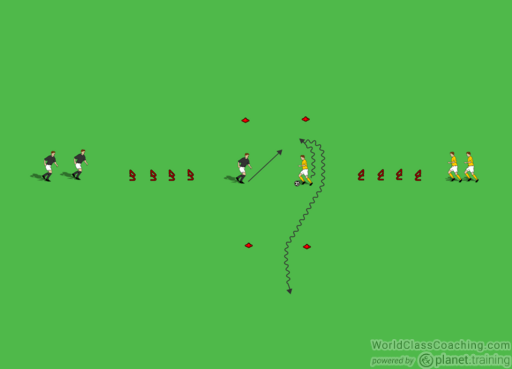 Coaching Points:
• Attentiveness during the start for start reaction.
• Aggressiveness to win the ball.
• When in attack, use sound tactical elements to beat defenders. Move defender to one side and then quickly explode to the other.
• Good defensive technique and intelligence.
• Dribbling skills to beat defenders.