We all have such limited time to impact the technical, tactical and physical abilities of our players that finding ways to integrate each of these into our training sessions is very important. If we were training four or five times a week we could afford to practice them in isolation but most of the coaches reading this won't have that luxury. 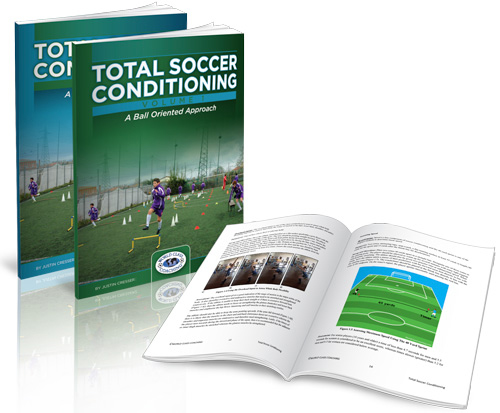 The summer off season gives me the time to read through new coaching materials and find ideas and training sessions that I can use during the upcoming season. A new book that we've just released called, 'Total Soccer Conditioning' has a number of exercises and small-sided games that I thought were interesting and innovative. It also includes training sessions that I've used in the past but with slight adjustments that will draw something different out of the players.

Here are a couple of exercises from the section on Speed Training.

Set-up and Instructions: Place two cones three yards apart in a straight line. Set up a small goal (1 to 2 yards wide) with flags or cones, 12 yards away from the closer cone as shown (Figure 4.3a). Divide your players into pairs with one ball between the two. The player with the ball will start on the cone closer to the goal and the other player will start on the cone behind them. (Set up a station for each pair or you can have two pairs per station, with one pair recovering while the other one goes. 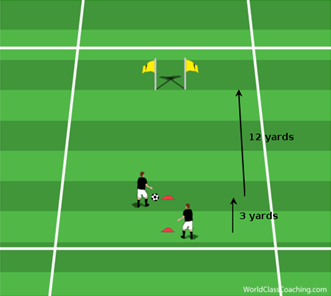 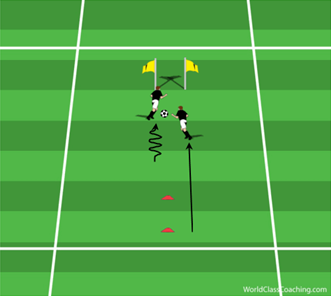 On the coach’s signal, both players start and accelerate towards the small goal. The front player must dribble the ball at speed, but under control, through the small goal while their partner attempts to catch them up and pass them (Figure 4.3b). Whoever crosses the goal line first is the winner. Switch roles after each attempt.

Coaching Points: The player without the ball must have a good ready position (low center of gravity, good posture). The first step must be in the intended direction and they must take short, powerful steps with appropriate posture (positive body angles) when accelerating. The player dribbling must use the instep (laces) and upon contact with the ball the toes must be pointing down. The first touch should be slightly bigger than the rest and in the intended direction.

Variation: Vary this exercise by using different starting positions (lying on stomach, lying on back, facing away from goal) for the player without the ball.

Progression: Allow the back player to tackle (NO slide tackles allowed)

Set-up and Instructions: Divide your players into groups of three with one ball for the group.  Have two players stand 5 to 7 yards apart facing each other, but with their sides to a third player standing 10 yards away. The two players will pass back and forth between each other, but they must take 2 touches (Figure 4.4a).  After a few passes, one of these two players will take a touch in the direction of third player. As soon as this happens, the third player sprints towards the player who has turned towards them (Figure 4.4b). There is no tackling or dribbling. Switch the working player after each repetition. 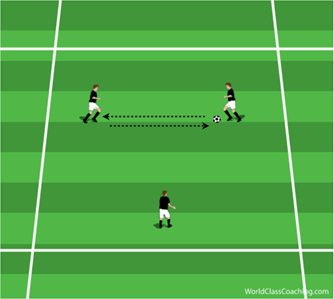 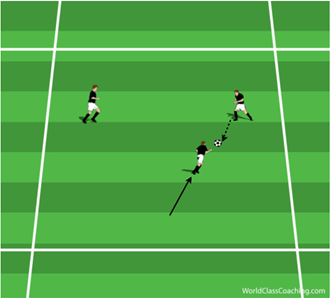 Variation: You can vary this exercise by having the coach call out “Close him down!” as the signal for the sprinting player to start his run.

Progression: You can progress this exercise by having the player make a curved run showing the turning player outside or inside (Figure 4.4c) 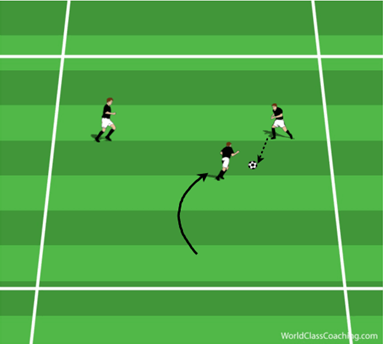 These are only a couple of the drills, exercises and small-sided games that are included in, 'Total Soccer Conditioning'.