Having been around this game along time I can comfortably say in almost every soccer match, at every level, there are goals left on the field by not challenging the near post and simply letting the keeper catch the ball and by not crashing the back post for a clean up. This lesson helps players stay sharp and focuses on making the right runs at the right time to get the most out of simple services into the danger zone.

Make the Pass Make the Run

Groups of three start as shown in the diagram. Cones can be 10 to 15 yards apart. Most common attacking elements are here in this warm up. The central player sends the ball out wide and then bends their run around the player to their left.  The player on the left runs diagonally to work a give and go with the receiving player on the right. The receiving player then sends the ball “across” to the central player and the group bends outside the drill, switches lines and waits to go again. 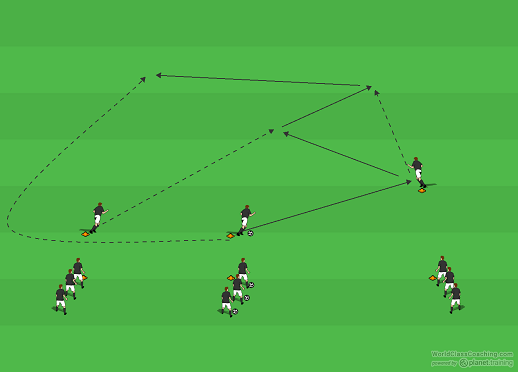 This is a simple warm up but the devil is in the details. The coach should focus the players on quality and getting into game speed.

Send them to Goal

The same game is now moved onto a half field in the attacking third. The central player sends the ball wide and bends away to the far post. The left player runs a diagonal to the near post. The wide player serves the ball into a 2 v 1 versus the keeper. The keeper has to stay inside the goalie box. 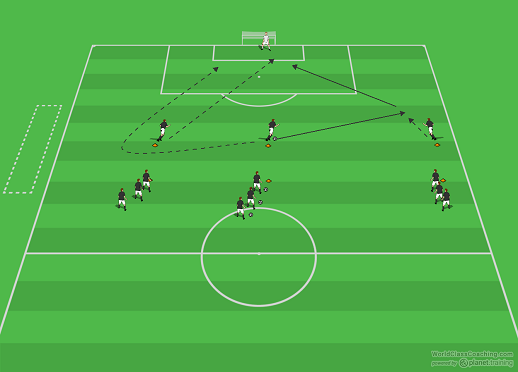 The object is to score a set number of goals in a row. I have to remind my players if they can’t score 3 v 1 against the keeper in this drill they will have a hard time scoring in an actual game. Give the players touch limits and set a number of consecutive goals for the group to score before moving on.

A group of defenders now serves the ball out to the wide player as the two central attacking players crash in to the near and far post. The defender must pick up one of the central players and allow the service. While still an attacking drill, this is also a good communication activity for the keeper and his defenders. 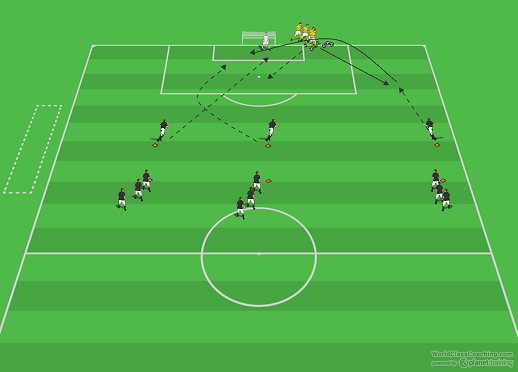 Quality, speed, and like the title stated, sharpness are the focus here. As before, set a number of total goals, consecutive or not, and challenge the players to make their chances count. This is a great practice to use between matches, on a
“ light” day or even after returning from a lay off.