Introduction: In this session we create a context where the players must work together as a group in order to recover the ball. The coaching methodology to be used is the guided discovery. The players will be allowed to explore how they can be successful in this stage of the game. The coach should use well-planned questions in order to allow the players to arrive to the right solution themselves. It is important to let the players experience the process where they learn through total immersion in the situation and by allowing the involvement of various senses to acquire information from different stimuli. The players learn to focus on the relevant stimuli while ignoring the rest. The coach should never tell the players what they have to do (command method), but let them explore and reason who, why, where and when certain team movements are being carried out. This is the application of a decision and the cooperation between teammates.

Developing the eight structures that form the player.

Bio-energetic: Maintain energy levels to keep concentrated and to perform mental and physical tasks.
Conditioning: Maintain good football physical actions without the ball in order to close gaps to prevent the opponents from playing through us and to have the physical strength required to recover the ball in direct duels.
Coordinative: Keep rhythm with the team to maintain compactness and be narrow in order to reduce the opposition’s space and time and thus reducing their playing options.
Cognitive: Identify the right moment of when to apply pressure on the ball or when to drop and be narrow and compact.
Socio-affective: Collaboration between teammates to keep the right distances and angles between them and also to move as a unit to reduce the opposition’s space and time on the ball. When the situation is on, the team should apply aggressive pressing actions as a unit.
Emotional-volitional: The positive attitude to recover the ball as quickly as it is lost and as close to the opponent’s goal as possible.
Expressive-creative: Let the players explore and discuss strategies on how they aim to recover the ball upon losing it.
Mental: A strong mentality and will to recover the ball quickly and dominate the game.

Stage 1: Coordination and cognitive tasks with the ball.
We introduce the aim of the session to the players by putting them in a situation where they have to recover the ball upon losing it. 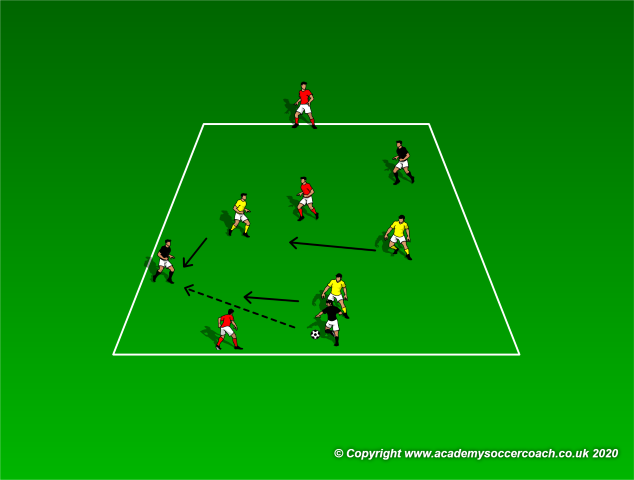 Organization: The area measures fifteen yards by twelve yards. The players are divided into three groups, two teams of three players each and the third team of three neutral players. One team starts with the ball.
Duration: 15 minutes.
Training load: Six series of one minute and thirty seconds each interspersed with one minute of dynamic flexibility in between.
Description: Prior to this practice the players should undergo running coordination, dynamic flexibility and mobility exercises. In this practice one team and the neutral team aim to keep possession and either make five consecutive passes to score a point or keep possession of the ball for a minimum of ten seconds. This condition forces the team recovering the ball to cooperate with each other in order to recover the ball as quickly as possible. Therefore they will be mentally set to recover the ball immediately upon losing it.

Coach the players on: Upon losing the ball how can we reduce the space of the opponents? Make one step forward. Where should we force the opponents to play? Towards the flanks where there is less space and especially to the side where they are the weakest.

Variation: If the exercise becomes very easy for the defenders to recover the ball, increase the area to twenty yards by fifteen yards thus making it more challenging for them.

In this stage we move closer to the main aim of the session where the selected training situations will be more relevant to what we are trying to achieve as a team.

Training situation 2: Prevent the ball from reaching the target player. 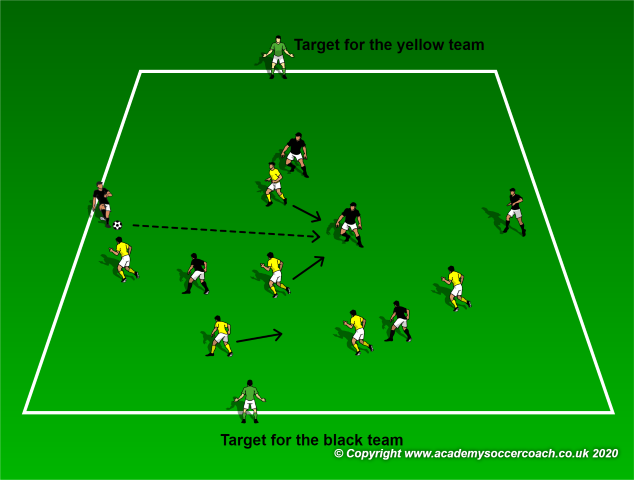 Organization: The area should be approximately forty yards by thirty yards. We have two teams of six players each plus a target player at each end line. The target players could be goalkeepers, so they also practice receiving and playing the ball using their feet whilst under pressure. The size of the area should aid the defending team towards applying the principles of defending; pressure, cover and balance, and to also be more compact and narrow. Understanding these principles as well as establishing good communication between the players will aid in a better transference when practicing in larger areas.
Duration: 15 minutes.
Training load: Two series of six minutes each with three minutes of rest in between.
Description: Both teams aim to score by passing the ball to their assigned target player. When a goal is scored, the team suffering the goal immediately starts attacking in the opposite direction. This requires the scoring team to immediately switch to recovering the ball (moment of transition) by closing the available space and time for the new attacking team.

Progression:
1. Increase the area of practice to fifty yards by forty yards.
2. Play with a neutral player who helps the team in the possession stage. This increases the challenge for the defending team further. 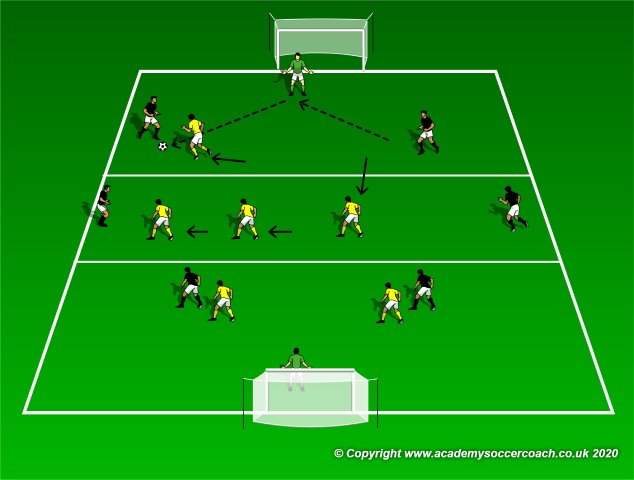 Organization: The area measures fifty yards in length by thirty five yards in width. The middle area measures ten yards in length while the outer areas both measure twenty yards in length. Both teams have two players in each zone. Each team also has a goalkeeper defending the regular goalpost of his team.
Duration: 15 minutes.
Training load: Two series of six minutes each with three minutes of rest in between.
Description: Each team can move one player between zones in the defensive phase. In the above diagram, the forward dropped to create an overload in midfield. Team may bypass the middle zone and play directly into their attacking zone. Scoring can only take place from inside the attacking zone. There are no corner kicks or throw-ins in this practice. The goalkeeper of the team in possession restarts play.

Coach the players on: What should the two forwards aim for? The forwards should apply aggressive pressure on the ball with the aim of causing the opposing defenders to make mistakes. Winning the ball higher up the pitch and closer to the opposition’s goal is our number one priority. One of the two forwards can also drop in the middle zone to further increase numerical superiority. What is the main task of the midfielders? The midfielders should work together to mark potential receivers in this area, and cut off direct passes into the defensive zone. Good positioning of the midfielders increases the team’s chance of winning the ball. If necessary one of the midfielders drops into the defensive zone to create a further overload in the defensive zone. And the defenders? The defenders should mark the players inside their zone, protect the area in front of their goal, and block shots.

Variation: Players are not allowed to move into other zones.
Progression: The attacking team may also move one player into an adjacent zone.

We finalise the session by working in more realistic contexts that includes more realistic rules, realistic distances between the players, and more unpredictable and random situations. 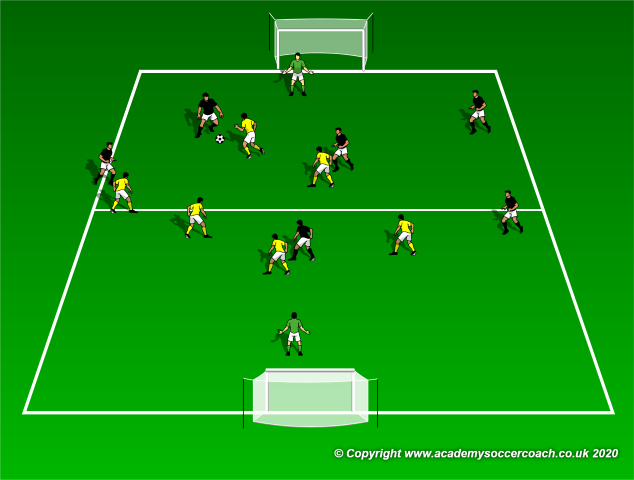 Organization: The area of play is fifty five yards by forty yards. We have two teams made of a goalkeeper and six outfield players.
Duration: 15 minutes.
Training load: Two series of six minutes each with three minutes of rest in between.
Description: Normal game but to be able to score the team in possession must have all its team members in the attacking half of the field (except the goalkeeper). Furthermore, if a team recovers the ball in the attacking half of the field and scores, the goal counts double.

Coach the players on: Why do you think we have imposed the rule that all team members must be in the attacking half when scoring? So to create overloads in the opposition’s half of the field. Therefore, if the ball is lost it becomes easier for us to apply immediate pressure. How will this rule help in shaping our behaviour on the pitch? By putting more pressure on the opponent and be more successful in recovering the ball close to the opponent’s goal. It shows that we are dominant in the game and this could destroy the opposition team’s morale.
Progression: To increase the physical and mental intensity, as well as cooperation and team compactness, all team members must be in the defending half of the field if the opponent scores. 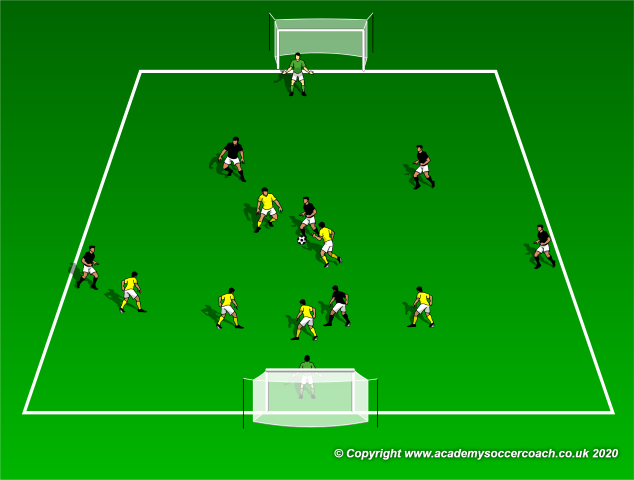 Organization: The area of play is fifty five yards by forty yards. We have two teams made of a goalkeeper and six outfield players.
Duration: 20 minutes.
Training load: Two series of nine minutes each with two minutes of rest in between.
Description: Normal game but if a team recovers the ball in less than five seconds after losing it they win a bonus. For every five earned bonuses, teams will earn a penalty.

Further challenge: Take off a player from one of the two teams. Notice how the players in that team adjust to the new situation.

Players are paired and perform light passing exercises between them. This should be followed by static stretching exercises and declarative feedback on what the players did well to achieve the required aim, or on which components they need to work further.