Good positioning can be the difference between a shot going in the top corner or a corner. It could even be the difference between an embarrassing deflecting going straight to the Keepers hands or straight in the back of the net. Simply put I tell my Keepers that they should be making a save in the middle of their goal and down the line of the ball. By the middle, I don’t mean centre of the goal but the middle as per the perspective of the striker, in between the posts. This makes the goal appear smaller and reduces the target.

A) I always start warming up angles by starting at the front post and serving the ball to the Keeper. I then work my way to the back post across the 6yrd box, the Keeper must follow keeping the correct angle.

B) Set up three small goals, as picture. Make sure the two goals near the posts cover the front posts as the Keeper is facing otherwise this will encourage poor positioning. The coach must call a gate, number, player name, direction and the Keeper must run between the gate as they arrive the server must strike the ball. The Keeper returns to the line and goes again on the coach’s call. Once comfortable with basic strikes get the server to vary the type of shots. It is however important that the strike is on target. The progression would be to remove the gates and have the Keeper perform the same task just without help. 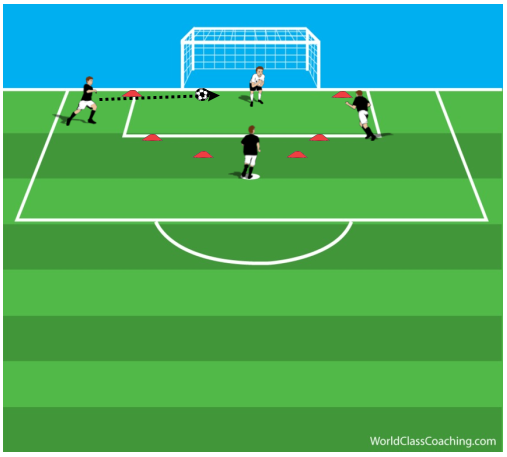 The goalkeeper starts facing the passing server. This server continues to pass, volley, shoot against the Keeper. To keep it interesting vary the servers after 30 seconds. At anytime the second server can shout for the Keeper. The Keeper must turn around and get in to the correct position to make the save. This drill is set out for one on ones but can be tailored to have a number of people in the session. 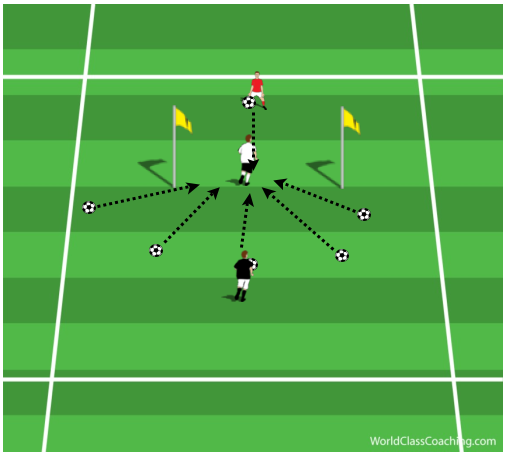 This game works on the Keepers angles and if you’re working with outfield players gets them working on their angled finishes. The attackers can only finish inside the coned off areas. 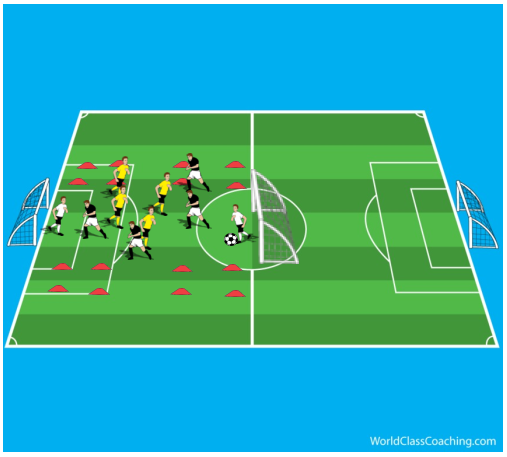